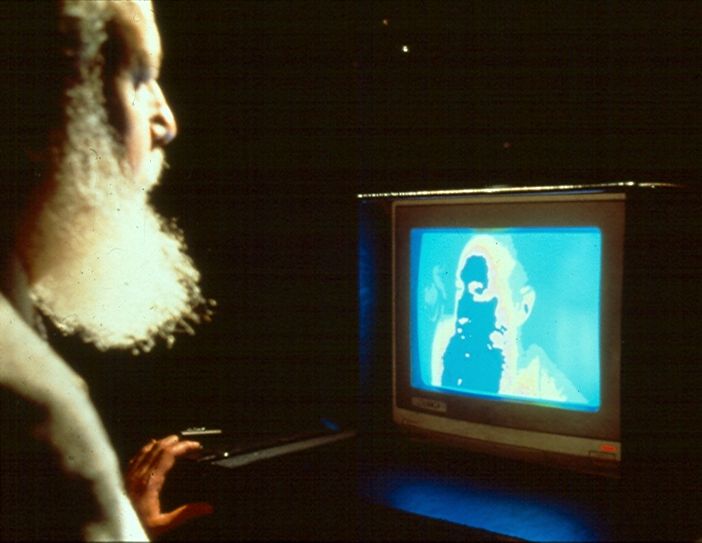 This blogpost is based upon the “Turn Your Lens on Yourself” chapter in my book Photograph God: Creating a Spiritual Blog of Your Life http://photographgod.com that explores the vibrant interface between spiritual seeing, smartphone photography, and social media.  It demonstrates how kabbalah, the down-to-earth spiritual tradition of Judaism, offers fresh insights into the creative process, both human and divine.

I describe the process of my creating an artwork to help you use the kabbalistic model to become aware of your creative process as you photograph God and creating a spiritual blog your life.  Here I describe how I created Inside/Outside:P’nim/Panim, a responsive artwork through which internal mind/body processes and one’s facial countenance engage in dialogue.   Participants in Inside/Outside: P’nim/Panim create a live feedback loop as they photograph themselves.  The photo above shows my interactive biofeedback-generated self-portrait that I created at MIT Center for Advanced Visual Studies for the LightsOROT: Spiritual Dimensions of the Electronic Age exhibition at Yeshiva University Museum in New York.

My process once again began in synagogue on the Sabbath day. I was absorbed in the rhythm of the chanting of words from the Torah scroll following them with my eyes. I was far removed from my studio/laboratory at MIT when I suddenly realized that the Hebrew words for face panim and for inside p’nim are written with the same Hebrew letters. This flash of awareness that outside and inside are linguistically one is the sudden transition from Crown to Wisdom, from intention to insight.

When I told my son what had just dawned on me, my mind left the sephirah of Wisdom for the sephirah of Understanding. The linguistic insight that ignited the process began to take form as an artwork in Understanding.  I sensed that I needed to create portraits in which dialogue between the outside face and inside feelings become integrated in a single artwork.

HARMONIOUS INTEGRATION OF OPENNESS AND CLOSURE

The first three sephirot symbolize the artist’s intention to create and the cognitive dyad of Wisdom-Understanding in which a flash of insight begins to crystallize into a viable idea.

The fourth sephirah, Compassion, symbolizes largess, the stage in the creative process that is open to all possibilities, myriad attractive options that I would love to do. I thought of a multitude of artistic options opened to me for creating artworks that reveal interplay between inner consciousness and outer face.

Compassion is counterbalanced by the fifth sephirah of Strength, restraint, the power to set limits, to make judgments, to have the discipline to choose between myriad options. It demands that I make hard choices about which paths to take and which options to abandon.  As an MIT research fellow with access to electronic technologies, my mind gravitated to creating digital self-generated portraits in which internal mind/body processes and one’s facial countenance engage in dialogue through a biofeedback interface.

The balance between the affective dyad Compassion-Strength is the sephirah of Beauty.   As I felt satisfaction with my choice, I departed from the sephirah of Strength to the next stage, the sixth sephirah, Beauty, the aesthetic core of the creative process in which harmonious integration of openness and closure elicits an exquisite feeling.

The seventh sephirah, Success, is the feeling of being victorious in the quest for significance. I felt that I had the power to overcome any obstacles that may stand in the way of realizing my artwork. I had the confidence that I could orchestrate all the aspects of creating a moist media artwork that would forge a vital dialogue between dry pixels and wet biomolecules, between digital imagery and human consciousness. The eighth sephirah, Splendor, is the splendid feeling that the final shaping of the idea is going so smoothly that it seems as effortless as the graceful movements of a skilled dancer.

The ninth sephirah, Foundation, is the sensuous bonding of Success and Gracefulness in a union that leads to the birth of the fully formed idea. It funnels the integrated flow of intention, thought, and emotion of the previous eight sephirot into the world of physical action, into the tenth sephirah of Kingdom, the noble realization of my concepts and feelings in the kingdom of time and space. It is my making the artwork.

I constructed a console in which a participant seated in front of a monitor places her finger in a plethysmograph, a device that measures internal body states by monitoring blood flow, while under the gaze of a video camera.  Digitized information about her internal mind/body processes triggers changes in the image of herself that she sees on the monitor. She sees her face changing color, stretching, elongating, extending, rotating, or replicating in response to her feelings about seeing herself changing.  My artwork, Inside/Outside: P’nim/Panim, created a flowing digital feedback loop in which mind/body state p’nim effects changes in one’s face panim, and panim, in turn, effects changes in p’nim.  It creates living self-generated, interactive, digital portraits in the Kingdom of space and time.

When you create photographs of God revealed in your everyday world and create a spiritual blog your life, you are acting as God’s partner in continuing creation.  It is through turning your lens on yourself to gain insight into your creative process that you can catch some glimpses of the Creator of the Universe at work.  In Genesis 2:2-3, we learn that on the seventh day God ceased from all the work that He had been creating so that we could continue His work on the eight day.  The kabbalistic model of creative process outlined in this chapter offers you tools for observing yourself as God’s partner.

Rabbi Joseph B. Soloveitchik, teaches in his masterpiece Halakhic Man that the central idea of Jewish consciousness is the importance of human beings as partners of the Almighty in the act of creation.

“If man wishes to attain the rank of holiness, he must become a creator of worlds.  If a man never creates, never brings into being anything new, anything original, then he cannot be holy unto his God.  That passive type who is derelict in fulfilling the task of creation cannot become holy.  Creation is the lowering of transcendence into the midst of our turbid, coarse, material world.”