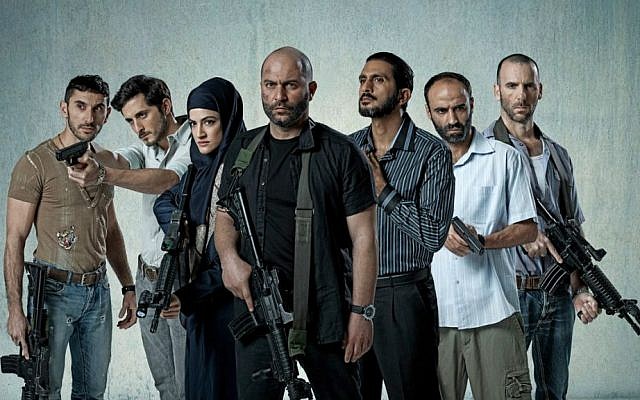 The cast of 'Fauda,' the YES drama about undercover agents in the West Bank, co-created by Avi Issacharoff, who writes for The Times of Israel (Ohad Romano)

Yesterday was the long-awaited Broadway opening of the play “Oslo,” which I saw in previews last Sunday. I eagerly concur with the enthusiastic New York Times review published today.

Contrary to what one might expect, given the title, the play is decidedly not a naive, nostalgic ode to what might have been, but rather a balanced, sophisticated exploration of how haphazardly history is made, and how quickly it can be changed – both positively and negatively. It does not sugarcoat what transpired in the years following that hopeful handshake on the White House lawn, and the plodding, incremental process that could not keep pace with those who sought to sabotage it. Neither does it presume that all the fallout from the agreement was negative (for instance, the process yielded a stable peace with Jordan). It also highlights how little the US had to do with this agreement, as well as how possible such a deal could still be, if the spirit were willing.

At the same time, I’ve been feasting on “Fauda” on Netflix. This gripping Israeli TV series (co-created by T.O.I’s Avi Issacharoff) has garnered superb reviews for its realistic, three dimensional portrayal of the Israeli Palestinian struggle through the eyes of a secret Israeli unit that infiltrates the infrastructure of West Bank terror groups.

Click to see the co-creators’ recent appearance at AIPAC.

Fauda means “chaos” in Arabic, a reflection of both the messiness of Palestinian life as well as the chaotic world of this undercover group.

On one level, the situation appears so intractable and hopeless, but on closer examination, we find that what unites the two sides of this conflict far exceeds what divides them. They are joined by their very human responses to the chaos around them, and in particular the desire to protect and avenge their loved ones. For protagonists on both sides, the prime motives are not nationalism and ideology, but love and retribution. And that love crosses boundaries – a passionate affair between a Palestinian and an Israeli lies at the core of the narrative.

At their AIPAC presentation, the creators spoke of how the show has been enthusiastically received on all sides of the divide, even among Hamas groups. That in itself is a quasi-miracle. Despite the violence that is so pervasive, the show offers a glimmer of hope that the level of understanding between the two sides can be raised as people recognize the common humanness of the Other.

If the people who negotiated at Oslo could have time-traveled 25 years into the future and seen “Fauda,” undoubtedly it would have shocked them, possibly to the point of giving up hope on their quixotic enterprise. But without that first, halting, clumsy step in Norway, where would we be right now? It’s impossible to know, but it’s not hard to conceive that the situation would be even worse. No peace with Jordan, no functioning Palestinian police that cooperates with Israel, no infrastructure in place for a potential two-state solution – and no recognition of Israel’s right to exist, explicitly by the Palestinians and implicitly by other Arab states.

Oslo planted the seeds that are currently being reaped in fiery rage in “Fauda,” but seeds have a way of flying in the wind, only to land and bear fruit in more hospitable soil. We don’t know where and we don’t know when. But we do know that when there is peace some day, it will be because at long last, what was envisioned at Oslo, and what can be seen beneath the surface of “Fauda,” was that this tiny spot of contested land can be a place of hope and human flourishing for all.