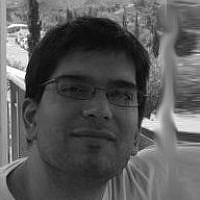 The Blogs
David Brooks
Apply for a Blog
Advertisement
Please note that the posts on The Blogs are contributed by third parties. The opinions, facts and any media content in them are presented solely by the authors, and neither The Times of Israel nor its partners assume any responsibility for them. Please contact us in case of abuse. In case of abuse,
Report this post.

Over the years, there have been many articles written about the tyrannical and tiresome Oslo Accords. But one aspect not as yet touched upon is its economic impact on Israel.

The politicians talk, they suggest commissions and run from meeting to meeting in some sort of bid to convince someone they’re doing something. But the average Israeli continues to suffer as prices continue to increase. Doesn’t anybody have a solution?? The solution is staring us in the face, but we’ve learned to ignore it…

In Tel Aviv, property development is at a record breaking pace. Almost every day you see new luxury apartment blocks going up. This is all very well and good and is not bad in and of itself, but as the housing protesters showed over the last 4 years there is a large swathe of Israeli society not being catered for. Traditionally, this class of people has not had an easy time financially, living in a country nearly always at war (and which leaned to the left, economically, which didn’t help). But in the last few years as Israel has become more wealthy, a large segment in the middle of Israeli society is being ignored. While Israel caters to wealth new Oli who can afford the luxury housing, those typically born and raised here are left far behind. And it is to Israel’s economic detriment overall.

Take one of the cheapest, most economically viable and central areas in Israel, Judea & Samaria. Only a few miles/kilometres from Tel Aviv and the price of property is a fraction that of Tel Aviv.

Normally, those who can’t afford an ever-increasingly expensive town, move away to somewhere more affordable. Thus improving their quality of life as they don’t have to struggle quite so hard to pay those bills. But not so in Israel. Moving away from the centre (ie Tel Aviv) means an ever decreasing quality of life because the rest of the country is so far behind. This is Israel’s version of the poverty trap.


This is why, when I saw an article featuring some very beautiful pictures of MK Arieh Eldad’s home (of Otsma Leyisrael) in Judea & Samaria, the whole thing suddenly dawned on me. His article, (in Hebrew) entitled ‘If you’re an Israeli and want to improve your lot in life, move to Judea and Samaria’, showed what a great living one could have there.

Annexing J&S as well as PM Netanyahu adopting the Levy Report, would’ve meant Israeli sovereignty over J&S. That would’ve meant changing a lot of things on the ground in Israel, thus going a considerable way to helping Israel, long term. Of course, it would mean Netanyahu having to take the brunt of the international community’s fury, and unfortunately, as we’ve seen with Bibi’s E-1 stunt, Netanyahu has made clear over the last 4 years, he’s not prepared to do that. In fact quite the opposite.

He has evicted Jews who had legally purchased a home in Hebron from Arabs. Even when Jews in Migron purchased the land they had settled (or was it Bet El?), they were evicted by the Netanyahu government nevertheless.

Successive governments have refused to annex J&S, including Netanyahu, despite the fact that Abbas’ UN bid violated the Oslo Accords which means that Israel is no longer bound by her side of the agreements. All of this essentially means that Israel is severely restricting its own natural growth. It is impeding the middle class from moving its way up to the next step in the economic ladder, because by not providing J&S as a viable, cheap alternative, it is effectively removing several steps from the middle of that ladder as people in other developed nations usually climb as they work their way through life, gradually paying off mortgages acquiring property etc. as they go.

Herein lies the problem. As long as Israel refuses to assert its own rights, simply due to international pressure, Israel will never be able to grow healthily, providing opportunities for all.

It is basic market economics that the more rare a commodity is, the greater its price (think of gold compared with tin. Gold is more expensive because it is far more rare). The same is true for Israel’s property market. As one mainstream Israeli government after another continue to ignore the elephant in the room (land settlement), houses are fewer (especially in Tel Aviv), thus more expensive. But like those majority of Israelis with nowhere else to go, they are left behind economically.

So why did Netanyahu not adopt the Levy Report? Why did his government not annex J&S after Abbas’ UN bid as MK Danny Danon threatened they would? Why has Netanyahu been the most useful tool Abbas has had, pushing ahead with a Palestinian state with a divided Jerusalem as its capital when neither side has been at the negotiating table over the last 4 years?

We can speculate forever what the PM’s motivations are (Obama, Iran?). But what one cannot deny is who is paying the price for this, who has to bare the burden. The Israelis who came out on the streets over the last 4 years. That’s who. So from the housing protesters to the people actually living in J&S who have been harassed, all have been paying the price for Netanyahu as PM.

We elect politicians to represent our interests and needs. We elect leaders to protect us, to negotiate on our behalf. Not use us and lie to us as they try to negotiate international diplomacy while trying to get away with fighting for us with as little bother to themselves as possible.

So what has four years of Netanyahu gotten us internationally? What about this wrath of the international community? What exactly is it they can wield? Well, it seems the Netanyahu government won’t have to annex J&S in order to find out. Because today we have just heard that the EU is spear-heading a new peace plan for yet another Palestinian terror state, the negotiations for which will begin in March.

So there you have it. Israel doesn’t even have to do anything in order to invite the international community to gang up on us. The only thing we have to worry about as subjects of king Bibi, is how many concessions are going to be made on our behalf and at our expense this time…

It is for this reason (and more) that I have totally rejected the Likud and decided to cast my vote with Arieh Eldad, Michael Ben Ari, Arieh King and all the rest, and go with Otsma Leyisrael. To solve our economic problems we need fighters in the Knesset in which the international community will have to work hard to please, not weak willed career politicians who make walking all over us by the international community an enjoyable past time for them…


It is also an interesting coincidence that another one of Israel’s major problems can be solved by reading the Bible, when God commanded Abraham “Go ye forth and settle in the land that I will show you [Israel].”

Like in much else, we just lack the belief to see it through…