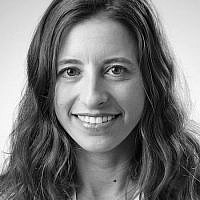 The Blogs
Michal Bitterman
Apply for a Blog
Advertisement
Please note that the posts on The Blogs are contributed by third parties. The opinions, facts and any media content in them are presented solely by the authors, and neither The Times of Israel nor its partners assume any responsibility for them. Please contact us in case of abuse. In case of abuse,
Report this post. 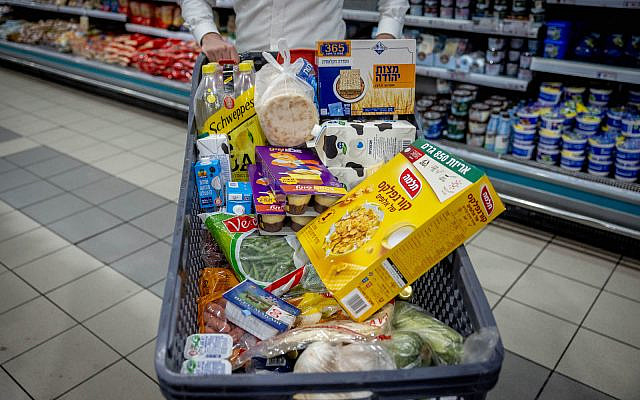 People shop for groceries at the Rami Levy supermarket in Jerusalem on October 19, 2022. (Yonatan Sindel/Flash90)

The year 2022 saw an emergence from the COVID-19 crisis and the reopening of markets, alongside the war in Ukraine that rattled world orders and a growing awareness of the dangers of the climate crisis, whose signals are increasingly visible on the ground. One of the most important systems for the existence of human life is the food system. Unlike other consumption systems, this system is indispensable and its environmental, economic, social and health implications are enormous. This system is branched, international, consists of multiple interests and has undergone tremendous changes in recent decades. At a personal level, food prices are increasing and the expenditure on food has become central to households. This trend is not expected to change.

The past year made it clear from testimonies on the ground that the resilience of this system must be shorn up because it is deteriorating and what worked in past years will no longer be able to operate in the same way. In the system that once seemed so stable, cracks are starting to show, whether it was in shortages, delays and restrictions on exports and imports during the global pandemic; shortages and instability due to the Russia-Ukraine war; or just general changes brought on by the increasing cost of living. Yet, even at the Sharm el-Sheikh Climate Change Conference, where the issue of food was on the agenda for the first time, no significant decisions were made in the agreements.

Global policy in general, and Israeli policy in particular, fail to define goals and set resilience plans. The discourse focuses on how to feed the world’s population – not on the need to streamline the system, preserve it and ensure its resilience and stability so that it can sustain the world’s population over time. In Israel, the silence is deafening – today there is no national policy, local prioritization or reference to the tremendous waste in the food value chain. As 2023 begins, it is clear that this year, strengthening the food chain must be positioned as a supreme value.

Alongside reports pointing out the danger of crop deficiencies, data from the annual report by the Leket Israel nonprofit, BDO Consulting, and the Ministry of Environmental Protection for 2021 show no change in the huge amounts of food thrown away. Israel is still discarding 2.6 million tons of food annually at an economic cost of NIS 21.3 billion. It is inconceivable that no policy exists to change such a failed system.

The information exists but a policy is absent. The world is making progress and understands the importance of reducing food waste and increasing resilience. Businesses are adopting new practices. The retail giant Tesco, for example, launched the Tesco Tinder surplus marketplace that aims to create a circular economy among all its 3,500 suppliers – an arena for exchanging crops, products or components and selling them prior to their expiration date. To share raw materials, depreciations and unneeded inventories, and share best practices for reducing waste. And in another direction, legislation has been introduced in Norway that, as of January 1, prohibits the dumping of foodstuffs in supermarkets when they are wrapped. This practice should encourage efficiency in resources and prevent unnecessary waste. In Israel, there is currently no horizon for government policy or regulation in this area or significant business leadership taking a major game-changing stance that serves as an example to be followed.

The time to strengthen the resilience of Israel’s food system is now — before the system hits a wall. The new government must place the local food system at the center and commit to a national plan, create an integrated headquarters that coordinates all the relevant ministries (environmental, health, education, agriculture, economy), enact legislation reducing national food waste with targets per capita including mandatory measurement and monitoring, a law that prohibits retail chains from discarding food and requires the adoption of dynamic pricing measures, and regularizing expiration dates. In addition, it should encourage businesses to increase efficiency with resources and raise public awareness of alternatives.

About the Author
Dr. Michal Bitterman is CEO and co-founder of The Natural Step Israel, a non-profit organization that implements sustainable practices throughout Israel.
Related Topics
Related Posts
Michal Bitterman