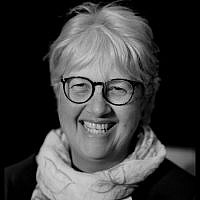 The Blogs
Leonie Lewis
Apply for a Blog
Please note that the posts on The Blogs are contributed by third parties. The opinions, facts and any media content in them are presented solely by the authors, and neither The Times of Israel nor its partners assume any responsibility for them. Please contact us in case of abuse. In case of abuse,
Report this post.

Over the past six months, the Jewish Volunteering Network (JVN) has been working in partnership with the Catholic charity Caritas to launch the latter’s own similar body, based on JVN’s model.

Our two organisations first combined last September, through our similar work dealing with the challenges of refugees in Calais.

We began speaking about the tests we faced regarding volunteering in our respective communities and then realised we could work together.

Caritas Westminster is a social-action agency that encourages parishioners to make a difference in their local communities. Director John Coleby realised that the JVN model could be easily replicated for other faiths. The Catholic community had nothing concrete in place to manage their large network of volunteers, but shared JVN’s perception that people with faith convictions wanted to reach out and volunteer.

Volunteering can be a complex issue when it comes to faith-based values. For the Jewish community, mitzvot and chesed (kindness) are entrenched in lifestyle choices.

For Caritas, these choices too are strongly encouraged by the Judeo-Christian tradition, espoused by the Old and New Testaments alike, expanded upon by commentators and demonstrated by the large number of faith value-based charities in society today.

But volunteering itself is set apart. Indeed, in Hebrew there is a specific verb ‘to volunteer’ in lehitnadev.

There are two parts to this word. The first part renders it a reflexive verb and it is easy to see why. People who recommend volunteering from their own experiences will include in their reasoning the benefits that volunteering has brought for them alongside the beneficiaries they support.

The second part – the root of the word – is more interesting. The Hebrew letters nun, daled, vav, spell nadav, are mentioned at least three times in the Old Testament, where a conjugation of the verb is associated with contributing to the upkeep of the portable sanctuary used by the children of Israel in the wilderness. This contribution was not compulsory; it was to be given only by those “whose heart made them willing”.

The aspect of motivated willingness lies at the heart of JVN’s understanding of volunteering: a self-motivated act borne out of a willingness to do the right thing.

It is therefore important that all people of whatever religion are afforded the opportunity to do the right thing. The opportunity to volunteer, coupled with a willingness to do what is right, leads to great acts that benefit all society. It is this essence that was the catalyst for collaboration.

We have made a unique historical connection between JVN and Caritas. Our teams spent time together sharing resources in order to take the JVN model and adapt it for the Catholic community. As John Coleby says, Catholics are called upon to reach out to those most in need in society, and many are looking either individually or as parish groups for opportunities to share their time and skills for the benefit of the wider community. Caritas saw that it wasn’t just the JVN website that was the common thread, but also its tactics for volunteer recruitment, management and recognition. They realised they would benefit from the entire model.

We will continue to learn from each other. There are plans to expand the partnership, such as through developing the Winter Volunteering Programme, whereby Jewish volunteers actively ask JVN to find them opportunities within the non-Jewish community over the holiday season. This could easily be extended over other holidays. The overriding ambition is that our communities work together to help to build a better society.

We hope this will lead to more faith link-ups in the future, particularly with the Muslim community, establishing the JVN proposition as the go-to volunteering model across all faiths.

About the Author
Leonie is an ex charity and community consultant, and former director of the Jewish Volunteering Network
Comments