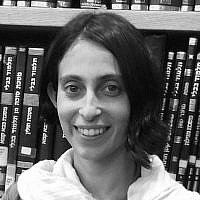 The Blogs
Briah Cahana
Apply for a Blog
Advertisement
Please note that the posts on The Blogs are contributed by third parties. The opinions, facts and any media content in them are presented solely by the authors, and neither The Times of Israel nor its partners assume any responsibility for them. Please contact us in case of abuse. In case of abuse,
Report this post.

In the book, Braiding Sweet Grass, Indigenous poetic writer and scientific researcher, Robin Wall Kimmerer, sets up a dichotomy between a Western model of a “private property economy” that centers individual humans over the land and an Indigenous “gift economy” that centers the land itself and where humans are one of many beneficiaries of that generosity. In the first model, the land is a commodity that can be bought and sold and treated however one pleases, whereas in the latter, the land is a living entity that will provide indiscriminately to all, but must be treated responsibly and with respect in order for its abundance to be revealed.

Kimmerer  explains that the core value of generosity is rooted in how we relate to the land we live on:

This is the fundamental nature of gifts: they move, and their value increases with their passage… the more something is shared, the greater its value becomes…practices such as posting land against trespass, for example, are expected and accepted in a property economy but are unacceptable in an economy where land is seen as a gift to all. (Pg. 27)

In the Torah, the land of Canaan is definitely sacred and is viewed as a living entity that acts as a litmus test for the Israelites’ moral standing and relationship to G-d. When the Israelites follow in G-d’s ways, the land will be bountiful, but when they stray, the rains will not fall. Given a type of sanctified animacy, Eretz Canaan seems to fit better into the gift economy model, where one could suppose the land could not be purchased or sold. But in Parshat Chayei Sarah we learn not only that the land is bought and sold, but that Avraham insists on it being so! Up until this point Avraham has solely been a “resident-alien” sojourning upon the land, but in this Parsha, he seems to wish to change his status to full resident.

In asking for a burial plot for Sarah, Avraham begins by asking the Hittites, (Gen. 23:4):

The Hittites insist that Avraham choose any land he wants for burial. But Avraham clarifies that he wanted to purchase the land, not receive it as a gift. Sensing resistance, Avraham’s next tactic is to buy a cave from Ephron, an honored, elected and wealthy man in the village. But Ephron, too, insists on giving the whole field to Avraham as a gift, with the people as full witnesses. Pushed to the end of his patience, Avraham states emphatically, almost with exasperation (23:13):

There is a strangeness in Avraham insisting on buying the land in the context of Sarah’s death. The laws of burying the dead as quickly as possible are so important in Judaism that the individuals who are responsible for the burial are poignantly released from other time-bound mitzvot and are in a liminal state called Aninut, אנינות. At this moment, Avraham, as an Onen, אונן, must do everything in his power to bury Sarah as quickly as possible. So why the prolonged back and forth between him and the Hittites that delays the burial, especially when they have generously offered him land at the outset of their own free will? Does he simply not believe that they’ll hold true to their word? Or is there something deeper happening in this protracted exchange?

According to Ramban, there was a mistake in his communication that rerouted the conversation. When Avraham used the words, tnu li, give me, the Hittites misunderstood that Avraham wanted them to gift the land and then they felt that they couldn’t back out of that offer. Something we all might relate to! But Chizkuni elucidates that Avraham had already set aside money for this moment and so legally the money was theirs (נתתי, Gen 23:13). Avraham never meant to “get” the land for free; his “tnu li” meant ‘sell to me!’ Avraham operated within a truth that only Hashem “possesses’ the land and has the capacity to “gift” it, as is seen in the various verses with G-d as the giver ( Gen 12:7, 14:14-17, 15:18). With the reality that there are other nations on the land, Avraham has to navigate the truth of being a “resident-alien” while holding onto the belief that one day he will become a resident of the land. Exactly how he and his descendants would procure the land, however, was not spelled out. G-d gave Avraham his fate, but not the path he needed to take in order to arrive there. It therefore makes sense that Avraham understood that he must use his wealth to peacefully procure land that would be undisputed in the later generations.

There is also a psychological reason why Avraham might have wanted to purchase the land. Earlier, G-d told him in the Brit ben Habetarim, The Covenant of the Pieces, that his offspring would eventually settle in the land, including the land of the Hittites (Gen 15:18-21), but that they would arrive as refugees after only recently becoming freed from four hundreds of years of slavery. Knowing what it is like to be a ger toshav, a resident-alien, Avraham may have wanted to assure his future descendants that they would legitimately be coming back to land that was theirs. They need not fear becoming slaves or indentured servants again.

Are we supposed to relate to the land of Canaan as functioning on a property economy or a gift economy? Was Avraham promoting the former, while the Hittites were promoting the latter? Perhaps it’s the exact opposite. Even though the Hittites and Ephron offered the land for free, it actually does not seem that they believed in the gift economy, where the land “belongs to all,” since 1) they were only gifting it to Avraham because they held him in high esteem and 2) eventually they accepted the monetary exchange. And perhaps Avraham only insists on ‘buying’ the land, because this is the only way he can establish himself in that society as a permanent resident and secure a place for his children into the future (Chizkuni). His first act of purchasing the land is only to perform a chessed shel emet, a loving-kindness for the dead. Here he models what we are meant to do with the land. Additionally, by specifically using the word tnu when talking to the Hittites, perhaps Avraham was hinting at the fact that there really is no way that we can buy and sell sacred land, for it belongs to G-d alone, more similar to the gift economy.

In this Shmita year, we get to remember that the Holy Land belongs to G-d alone. Our desire to claim ownership of the land is not possible, nor is it desirable, as the land offers its gift, when we act with chessed upon it. Finally, the verse related to the Shmitah year, nicely proves this point, “וְהָאָ֗רֶץ לֹ֤א תִמָּכֵר֙ לִצְמִתֻ֔ת כִּי־לִ֖י הָאָ֑רֶץ כִּֽי־גֵרִ֧ים וְתוֹשָׁבִ֛ים אַתֶּ֖ם עִמָּדִֽי” “The land must not be sold beyond reclaim, for the land is Mine (G-d’s), you are but strangers resident with Me”. (Lev 25:26). This is an echo of Avraham’s opening statement to the Hittites,

Avraham sets the model for how we should relate to the land at all times, and especially in the shmittah year. May we inherit this nuanced message from Avraham Avinu to look to increase the chessed around us so that we contribute to a world where the gifts reveal themselves to all.

About the Author
Raised in the social, linguistic and culturally diverse Jewish communities of Gothenburg, Vancouver, Toronto and Montreal, Briah Cahana is honoured to have this chapter studying in New York at Yeshivat Maharat. Additionally, Briah has been a T’ruah, JLIC, 92 St Y Fellow and is currently an intern at Congregation Beth Sholom in Providence Rhode Island.
Related Topics
Related Posts
Comments