Yesterday, thousands of families attended a special event at Safra Square at which the police explained how their role is to make life better and demonstrated their equipment and their skills.

Yesterday, I joined friends from the organisation Tag Meir to pay a visit to Ishaaq Abu Jabneh.

Four weeks ago, in the early hours of Friday morning, the 36-year old taxi driver and father of three was near Zion Square when he was attacked by five or six young people in their mid 20s. He was hit with a large rock and kicked and beaten. His leg was badly broken, requiring an extended operation to inset metal pins, and he sustained some serious bruising.

As a Jewish Israeli, I wanted to be part of the group that apologised for the attack, which was carried out by racist thugs. Of course, it is a national shame that our education system and the other sources of influence in our society do not do more to make racism unacceptable. I discovered that there was a lot more than that about which we need to feel shame.

It was difficult to find the house in the Sheikh Jarrah neighbourhood. I caught a bus to the suburb (which is on the way to the Hebrew University) and began walking, directed by Waze. But Waze does not give directions in East Jerusalem. When I was still on the outskirts of the suburb, I was informed “You have reached your destination.” I hadn’t!

So I asked a family getting into a car if they knew the street. They said they were not sure but they knew the general direction. As I began to walk, they pulled alongside me and offered me a lift. I was very grateful. When I wanted to thank them and asked their names, they told me they were the Nashashibi family. (You can Google them – I was helped by one of the most prominent Palestinian families in the city.)

I found a fellow intending visitor in the street and although we would have waited for the rest of the group, a woman and small child emerged from the house and insisted (in beautiful Hebrew) that we come inside. There, we met Ishaaq and his other two children – each as beautiful and sweet as the other. The woman who had greeted us was his aunt, who was helping out, and she lavished cold drinks, snacks, chocolates and then tea and coffee on us. 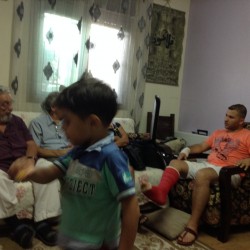 Visiting the injured driver in his home.

When the other visitors arrived – (they, too, had trouble locating a place without Waze –a sign of how dependent we have become but also reinforcing the shame that this app does not work everywhere in the city) – Ishaaq was prompted to talk about what had happened.

He told us that at first the thugs were harassing someone else and he tried to stop a confrontation. They thought he was Jewish and asked him why he was defending Arabs. When he said he was an Arab, the assault began.

“I know that in such situations you have to keep your hands behind your back so as not to get them mad, and that’s what I did. The gang leader didn’t stop swearing and told me: ‘Let’s take you somewhere where there aren’t any cameras and see what we’ll do to you,’” Ishaaq said.

He described how they then sprayed him with tear gas. He didn’t really see anything; he fell and just felt blows. They yelled ‘terrorist, terrorist.’

He spoke without anger or extending blame to anyone beyond the assailants but at one point he was on the verge of tears. As a self-employed person who has not worked for nearly a month, he was considering selling the only asset which would not directly affect his children – his taxi. The bank has not offered him special consideration and the national insurance coverage which should apply to him has not been activated, despite him having the assistance of volunteers who work for justice for those injured at work.

Ishaaq also said that he did not want to make a big issue of his situation in the Arab press and it could be used to incite more hatred and violence.

What is particularly galling is that the police have not yet investigated the incident. There is video footage but no-one has bothered viewing it. When police came to the scene, their first instinct was to blame the victim. Ishaaq had some injury to his arm, having protected his head with his arm once the attack began, as anyone would do, so police asked if he had incited the attack. When he and other witnesses described exactly what happened, police did offer him transportation to the hospital which he declined, as his friends were able to help. However, no-one from the police followed up. Indeed, when he went to the police station a week after his operation – he was told by doctors not to get up for a week – they asked him why he hadn’t reported the incident earlier. When he pointed out that police had come to the scene at Zion Square and taken his statement on the spot, they acknowledged that they were aware of the case but claimed that no-one had made an official complaint!

This is the greatest source of shame of all.

After the visit, I caught the light rail back into the city. As we drove past Safra Square, I saw dozens of families enjoying the police “open day,” a public relations exercise that was being held at various sites across the county to try to convince the community that the police are there to help.

Their efforts would be better spent protecting the rights of all citizens equally and investigating and prosecuting criminals. Out there are half a dozen young men who were part of at least one vicious attack. One of their victims would recognise them. There is video footage to verify the victim’s account of the incident. But nothing has been done.

Are we not ashamed – of both the attackers and the failure of the systems that should support victims?