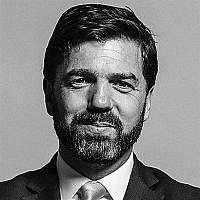 The Blogs
Stephen Crabb
Apply for a Blog
Please note that the posts on The Blogs are contributed by third parties. The opinions, facts and any media content in them are presented solely by the authors, and neither The Times of Israel nor its partners assume any responsibility for them. Please contact us in case of abuse. In case of abuse,
Report this post.

Last week, as the Jewish community expressed their hopes for a sweet and prosperous year ahead, I took this joyous occasion to reflect on my own exciting new challenge – I am honoured to become Conservative Friends of Israel (CFI)’s new Parliamentary chairman in the House of Commons.

As the MP for Preseli Pembrokeshire in South West Wales, I’m often asked about the reasons for my support of the Jewish state and the answer is simple – our shared values.

Israel is the only functioning democracy in the region. It is an exciting, vibrant and young country which has made a far bigger contribution to humanity than a country of its size can be expected to.

Whichever way you look at it, at 69 years young, Israel is one of the great success stories of the 20th and 21st centuries.

And, of course, there are many similarities between Wales and Israel. Israel is a country the size of Wales. The hills around the Galilee are just as green as those of Wales.

Citizens of both countries speak an ancient language undergoing a modern revival, and both countries boast a beautiful coastline along their western side.

I first visited Israel in 2006 with CFI. Seeing first-hand the threats Israel faces on its northern borders with Syria and Lebanon was a real eye-opener, but I was struck by the diversity of its society, and hugely impressed with the spirit of innovation and resilience that characterised the Israelis I met.

A moving visit to Yad Vashem left an indelible mark and highlighted the need to root out the evil of anti-Semitism.

Earlier this year, I revisited the country and saw the enormous growth it has experienced in a mere decade.

Such progress is all the more remarkable when considering the immensely difficult security challenges I saw in Sderot on the Gaza border, with its bomb shelters on every corner.

There is deep support for Israel at all levels of the Conservative Party. From the Prime Minister and her Cabinet, through the Conservative benches and the wider party, the support is genuine and a big reason why the UK-Israel relationship is stronger than ever.

From record annual trade of £5.5 billion and the strong rejection of the divisive boycott, divestment and sanctions movement, through to unprecedented criticism of the United Nations for its bias against Israel, this Conservative Government has a proud record of standing with Israel.

In my previous role as Secretary of State for Wales, I had the personal
pleasure of announcing £3 million of investment into South Wales from
Israeli companies.

Creating jobs and providing great business for local suppliers in Wales is precisely the sort of inward investment we should work towards securing more of, in a post-Brexit free trade deal.

CFI should be proud of the important work it has done in enhancing this prosperous relationship.

In particular, I pay tribute to my predecessor, and good chum, Sir Eric Pickles as it is thanks to his tireless work and leadership that CFI is in such a strong position today.

I am very much looking forward to building on this great work and further strengthening the UK-Israel bilateral relationship 100 years after the UK played such an integral role in Israel’s birth.

We are countries with a great shared history and an even more exciting future.