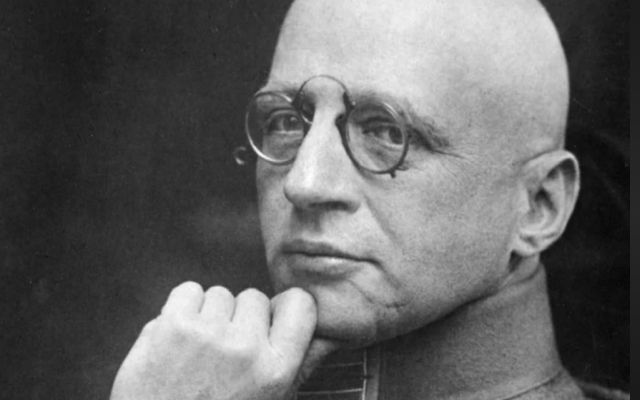 When the hiphop artist formerly known as Kanye West, now calling himself simply “Ye,” tweeted that he was going to go “death con 3” on Jewish people, Jews took notice. When he attended a dinner with the former President and brought a noted White supremacist and Holocaust denier as a personal guest, he generated even more attention. When he appeared on the show of a noted right-wing conspiracy theorist and expressed admiration for Adolf Hitler, it was not just Jews who condemned him.

We are in a period of accelerating antisemitism. Despite the fact that Jews make up only 2% of the American public, we are the targets of 55% of the acts of violence and bias based on religion. Not that this surprises many Jews. With a history of thousands of years of hatred directed towards our ancestors, Jews are taught to expect it – not to accept it, but to recognize that you will be seen as the Other.

But what might surprise many Jews is that we have our own Ye, a figure who traced a shockingly similar public path about a century ago, the Nobel prize winning chemist Fritz Haber (who now goes simply by “Ha”). The parallels are striking and seeing the same behavior in one of our own, might allow Jews to understand Ye – but not accept or embrace his Jew-hatred, but maybe understand the type of person who runs this way.

Among the most profound principles of Judaism is the expectation to show hospitality to the stranger, as Exodus 23:9 tells us, “you yourselves know how it feels to be foreigners because you were foreigners in Egypt.” That feeling is one of alienation, being alone and apart from where you live.

Jewish philosopher, Judith Plaskow, in her masterwork, Standing Again at Sinai, reminds us that women were also at Sinai. (It’s ridiculous that she has to remind us of something so obvious.)That Plaskow had to note that women were there echoes Simone de Beauvoir’s work, the Second Sex, where she identifies that when describing herself, the first thing she says is that she is female; but that male philosophers, undertaking the same exercise, would not even think to say that they are male.

To be Other is to always know that you are Other, an understanding that is not pleasant in these circumstances. You cannot but envy those who feel at home and exhibit the casual and unconscious boldness of those who do not even have to think about their identity. We are reminded here of Holocaust philosopher, Jean Amery, when he showed no place was his home after Auschwitz. You wish you could be inside, not always outside.

Kanye West and Fritz Haber were outsiders who received outsized praise from those on the inside. West, a Black performer and producer of world wide popular music, has won a stream of awards including some of the most prestigious; Grammy and People’s Choice Awards. Haber, a Jewish scientist in Germany, received the Nobel Prize for chemistry in 1918 for his invention of a process that allows the large-scale manufacture of ammonia. The ability to take nitrogen gas and fix it in a liquid created the possibility of mass manufacturing fertilizer. Haber’s work massively grew agricultural output, saving millions from starvation.

Both used their fame to curry favor with the powerful who oppressed the groups from which they came by playing into the violent structure each culture created. During Paris’ Fashion Week, Ye attended the showing of his clothing line in a “White Lives Matter” t-shirt. The slogan was clearly designed to mock “Black Lives Matter,” which became a cultural touchstone after the brutal killings of Black Americans by police.

“Black Lives Matter” was not stated as a fact because in light of the repeated killings and lack of consequences for the killers, it was clear that in American society black lives did not matter. The phrase was aspirational – Black lives SHOULD matter and the society would have to change to make this clearly moral proposition become true. It should not need to be said that Black lives matter, but unfortunately, it does. Saying it aloud focuses attention on the structural and individual racism that is rampant in the U.S., which, of course, is not what racists want. Hence, the common response of “All lives matter” was frequently heard from racists who bristled at a racial minority getting anything – even mere attention – they themselves were not getting.

“All Lives Matter” makes sure we never even admit that racism exists. By then moving beyond “All Lives Matter” to “White Lives Matter,” Ye was intentionally playing to these racists, saying that the cultural supremacy that White Americans possess should be celebrated and that the structural oppression of racial minorities was a non-issue. Let murderous police brutality proceed unchecked, the shirt implicitly says.

Haber wanted more than anything to be authentically German, but to Germans being Jewish meant Haber was of a different race, an inferior race. Haber did not oppose that racism by seeking justice in the way his friend Albert Einstein did. Rather, he internalized it and sought to try to sneak his way into the realm of the oppressor by ingratiating himself to them. He opposed the rising tide of Zionism, but not as Einstein did because he disliked nationalism. Quite to the contrary, Haber opposed the outflow of Jews because he embraced the nationalism of the Aryan Germans. A 20th century Pablo Christiani. To improve ourselves, we needed to fully assimilate, adopting the White ways of the Germans. Rather than flee and embrace our Jewishness, we needed to work hard to erase it.

Haber wanted so badly to be one of them that he would do whatever it took to win their love, including using his talents to serve evil causes. When World War I began, Haber used his government-sponsored laboratory to commence research into the use of noxious chemicals to create mass casualties on the battlefield. Overseeing hundreds of scientists and technical assistants, Haber became the father of the German chemical weapons program. Among the poisons he concocted were Mustard and Chlorine gasses which when released caused soldiers’ lungs to bleed, forcing them to drown in their own blood by the hundreds.

Both Ye and Haber were well-rewarded for being a member of the oppressed groups who publicly sided with the power structure. Ye received a personal invitation to dine with the former President at Mar-a-Lago. Haber, for his service to the Reich during the First World War, was given an official designation as a patriot which allowed him to keep his government post and job after the Nazi law banning Jews from such positions became law. Authority rewards turncoats who are willing to endorse oppression, giving cover to it, seemingly justifying it.

Austrian sociologist Ferdinand Toennies famously argued that there is a difference between communities and societies. Communities are groups defined by their unity, societies by their diversity. Communities are us partitioning ourselves off from them, whereas societies put us and them together in one place. Toennies held that no matter how homogeneous the community, it would find some way to tear itself apart, some property that would transform it into an us vs. them dichotomy.

This can be destructive, causing us to devalue or even dehumanize those on the other side of the social split. In some cases, we need to heal the rift, bringing ourselves together as one. In other cases, we need to recognize the differences and celebrate the diversity. But the worst impulse, one we see in Ye and Haber, is to ignore the suffering of those oppressed by the rift and seeking to only benefit oneself by cozying up to those with illicit social dominance.

It must be intoxicating to be celebrated by those who had been undermining you. They said you were less than and now tell you that you are a genius. If they tell me I’m special, then I must be! It thereby becomes a matter of self-interest to maintain the unfair power differential, to portray it as less than oppressive, as justified.

The structure of such social dominance makes what we see in Haber and Ye seemingly inevitable; Stockholm Syndrome. This is not an excuse, but rather an explanation. As we look at the Twitter tantrums that have occurred and are yet to come, we can at least understand some of the forces that motivate them.

Co-written with Professor Steve Gimbel, Professor of Philosophy at Gettysburg College and co-author with Stephen Stern of “Reclaiming The Wicked Son.”