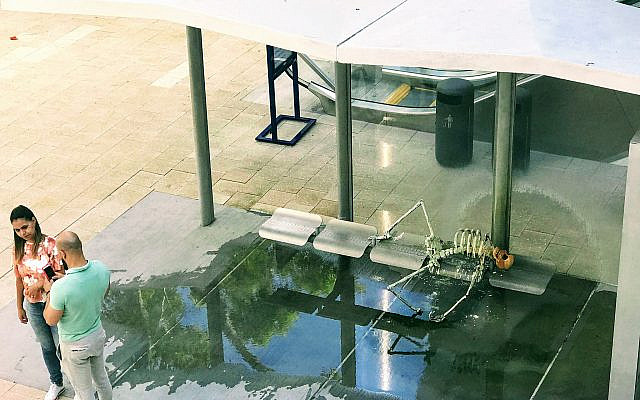 No, there isn’t a dead body on this bus stop bench!  But if you were reading news about Israel then chances are it would be reported as that and of course, “the horrible Jews” did it!

Why? Because fake news about Israel and the Jews continues to proliferate from many mainstream news sources that have sold out to the devil any credibility, they may have once had. Whether it’s the “Failing New York Times,” “Fake News CNN” or any other of the notorious media sources that are alleged to report biased, tainted news, unfortunately, it seems like a virtual non-stop barrage of anti-Israel and anti-Semitic spewing.  It may be overt or more subtle, but there are organizations like Honest Reporting that are tracking and calling out the false news reporting for the lies that they are.

From the ancient blood libels that falsely accused Jews of using Christian blood in Matzah to the Dreyfus Affair that falsely accused French Artillery Officer, Alfred Dreyfus of treason to the deceitful Protocols of Zion that fantastically claims the Jews control the whole world, there is no end to the hateful and anti-Semitic lies about the Jewish people. And when the anti-Semites can’t just go out and do another Inquisition, pogrom, or Holocaust to us yet, they fan the flames of Jew-hatred with endless false reporting and biased UN resolutions, until such time that they can!

Recently, I’ve been reading a terrific book called “David and Goliath: The explosive inside story of media bias in the Israeli-Palestinian conflict” by Shraga Simmons, and he give dozens, if not hundreds, of examples of media bias and lies being told about Israel. The biased fake news takes many forms: from hyper-focusing on Israel and holding them to an “impossible standard” (or a “double standard”) that no one else is held to; making wild exaggerations, “selective reporting,” burying key facts, using unsubstantiated or biased reports, interviews, and witnesses, and even “staging” or doctoring photos and their captions; reporting like a dumb “echo chamber” the same lies that the other media outlets said; creating false moral equivalencies, such as between terrorists and their victims, ridiculously attributing all of the Middle East or even the World’s problems on the Israel-Palestinian conflict; and blaming a “cycle of violence” that makes no moral distinctions.

We’ve all seen examples of these from “An Israeli policeman and a [bloodied] Palestinian on the Temple Mount” except the “Palestinian” was really Tuvia Grossman, a Jew. Similarly, 12-year-old Muhamad al-Dura and father crouching behind a cement barrel with bullet holes behind them and then the apparently dead boy in the father’s arm that was reported as a killing by Israeli troops, which was later completely disproven. Are these and so many other false reports simply negligence and unprofessional reporting by the media or perhaps are more nefarious biases and motives at play? Shraga Simmons gives a number of explanations:

The Palestinians are portrayed as the underdog, homeless and oppressed. Maybe some people really believe this even though Israel was able to absorb almost a million refugees from the Arab countries in just its first few years of existence, but the Arabs have refused for over 70 years to resettle the Palestinian refugees from the UN partition of Palestine in 1947 and the Arab attack to destroy Israel in 1948.  Additionally, let’s be frank and honest, this Palestinian underdog narrative serves a business purpose: It sells news around the world, especially with a Muslim world population approaching 2 billion and many more nations and people connected to them!

Ironically, it is Israel that has just 7 million Jews surrounded by hundreds of millions of Arabs. Further, Israel, geographically, is less than 1% the size of just Saudi Arabia alone, let alone over 20 other Arab countries in the region. Nevertheless, the media routinely casts the Palestinians as the underdog (as the David with the slingshot) against Israeli tanks, planes, and helicopters. They ignore that Israel is historically and in actuality the far smaller and threatened Jewish David, who is on defense from near constant War and terror against it. Moreover, Israel has repeatedly attempted to make peace as well as accepted peace offers with their neighbors (Egypt, Jordan, the Abraham Accords), while the Palestinians have continued to reject any and all offers that don’t include the annihilation of Israel from off the face of the map!

Similar to the 1973 Arab oil embargo that threatened the world’s energy supplies and brought western countries to their knees, now wealthy Arabs with billions of investments in media companies are calling the shots literally with phone calls strategically placed to senior executives at the news outlets. All of a sudden, news reporting gets turned on its head and for example, the murderous terrorists (15 of the 19 from Saudi Arabia) who flew the planes on 9-11 into the World Trade Center are, according to Reuters, now nothing more than “freedom fighters,” irrespective of how heinous the crime or unjustifiable the grievance. The terrorist attacks in America, Europe, Asia, Africa, Israel, and in Arab countries themselves that we have now become familiar with from radical Muslims are frequently glossed over or excused while innocent people are getting shot, stabbed, blown up, hanged, and beheaded.

The media is challenged in accurate and fair reporting when the reporters and photographers are threatened with being barred from future stories or intimidated by threats or acts of kidnappings and murder to themselves and their families. It’s much harder to report the facts, when one side is “holding a gun” to your head! This has reached the farcical point where the media frequently won’t even use (or buries) the word “terrorist” or “Muslim” in their reporting out of dreaded fear of reprisal against them and their employees. Remember what happened with 2015 terror attack on French magazine, Charlie Hebdo, for republishing cartoons of the Prophet Mohammed?

I would add a fourth category here for what’s behind the media bias:

Clearly, there are people out there that don’t like Jews and/or Israel. And it doesn’t have to be as blatant as Hitler’s Mein Kampf and the “Final Solution.” People may not like us or they may hate us for any number of explicit or unstated reasons: Perhaps they resent the Biblical label of “Chosen People;” they accuse us of being “Christ Killers;” they don’t like our Jewish personalities or culture (e.g. “there is no such thing as a shy Israeli”); they are jealous or resentful of our achievements (Nobel Prizes, “Start-up Nation,” historical longevity and contributions to the world, etc.); they need a scapegoat that distracts from their own national, religious, societal or even personal problems, or they are just biased, hateful racists (and there are certainly some Jews out there that fall into that category too). People in the media have biases and vices and can and certainly do fall into any one or more of these categories that negatively and unfairly skews their representation of Israel and the entire Jewish people.

As I’ve stated in prior articles, the Jewish people (like all human beings) are not perfect. We make mistakes. We do bad things. We don’t always live up to our potential and mission of being a “light unto nations.” And for these things, we are accountable and constructive criticism is fair and even welcome!  That being said, we are not colonialists, occupiers, an “apartheid state,” or any other derogatory names that you want to throw at us. We are human beings. We feel pain. We bleed. We love our wives, children, and communities. We try to be successful and do good in the world.  We want a homeland like everyone else to live and raise our families. We are not looking to subjugate or fight with anyone. More than anything we want and pray daily for life and peace. Yet, despite all this, what the anti-Semites and haters (including the fake news media) would have you believe is that we are sub-human, monsters, and deserving of having our State and people condemned (more than all other nations of the world combined), and at times persecuted, expelled, and should be genocidally exterminated.

I want to end with the beginning from Shraga Simmons book that to me said it best:

Imagine an alien lands on Planet Earth. Curious to find out what preoccupies the human race, he flicks on the news.

Not the genocide in Darfur. Not the Uyghurs in Chinese detention camps. Not the Syrian civil war that killed over half a million people and displaced millions. Not the global drug war. Not the pollution, climate warming, and threats to our natural resources and planet. Not third world hunger and disease. Not the brutal oppression and lack of basic freedoms and human rights in brutal dictatorships around the world. Not the threatening weapons of destruction of Iran and North Korea. Not the frightening standoff of the superpowers: America, Russia, and China and the potential for escalation and even World War III.

Barely a mention. From the New York Times to the airwaves of CNN, one country — Israel – [a nation smaller than New Hampshire] is the hot topic of the day, generating more news coverage than anywhere else in the world…the alien visitor would wonder what kind of bizarre planet has he landed on? Why the media obsession with this tiny nation?

The answer my friends is not pleasant or pretty for the biased news media, their benefactors, and the public that is subjected to a ongoing series of falsehoods and hateful reporting, but read Simmons book and see for yourself the dangerous world of fake, fake, fake news. Whether it’s 1984 “Big Brother” telling you what to think and do or the media twisting the truth so that’s unrecognizable anymore, this is dangerous not only to the Jews as scapegoats, but to the souls, freedom and future of our world.