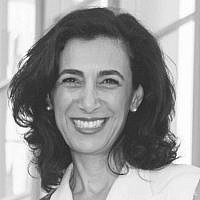 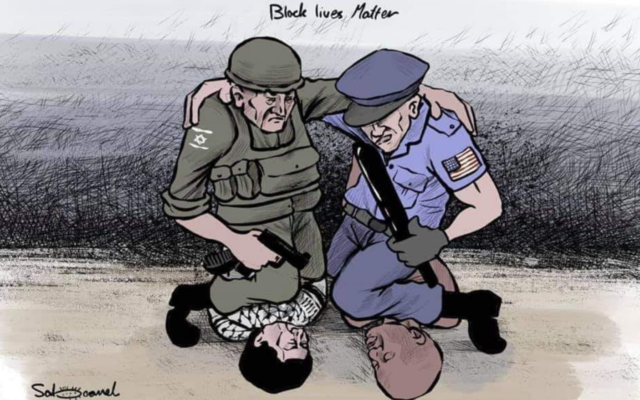 Israeli and American soldiers support each other as they kneel on a Palestinian and a black man, choking them (Al-Hayat al-Jadida screenshot)

A new pattern seems to be emerging from the extreme anti-Zionist camp, which appropriates clear-cut cases of murderous hate taking place in American cities today and distorts the context by either localizing or universalizing its message to vilify Israel, Israelis, and Jews.

Responses from many within the anti-Israel movement to the recent mass shooting in Buffalo and the second anniversary of the George Floyd murder over the past months highlight this pattern. In both cases, anti-Zionists proceeded to conflate those atrocities with some aspect of the Israeli-Palestinian conflict. Some examples of this follow.

Not only does this strategy often veer into clear antisemitism, but it also defeats the seeming purpose of such activism. It certainly doesn’t help Palestinian advocacy as it gets mired in accusations of antisemitism and, at the same time, waters down the legitimate campaign to advance core racial justice issues in the United States.

The tragic May 14  Buffalo shooting targeting Black Americans took place a day before Palestinians and Palestinian activists were commemorating the 74th anniversary of Nakba Day, which marks the creation of the Palestinian refugee problem in the period around the establishment of the State of Israel in 1948.

Appropriating the proximity of both events, elements of the anti-Israel movement in the United States merged their commemoration of Nakba Day with attempts to draw parallels between the murderous act in Buffalo and Palestinian rejectionism of the creation of the State of Israel. They cynically universalized their message by alleging that Zionism, or support for the existence of the Jewish and democratic state of Israel, is a form of racism akin to white supremacy; therefore, so the logic goes, the murder of black Americans at the hands of a white supremacist is somehow akin to the Jewish struggle for self-determination.

Examples of this include:

Through an intentional mischaracterization of Zionism, these groups call for a collective effort to fight what Jews have always considered the core of Zionism, the Jewish right to self-determination.

Involved here is not just the tactic of changing the context, but also an effort to distort the definition of Zionism as an expression of Jewish self-determination reflecting the authentic and millennial longing of the Jewish people to return to their ancestral homeland. This denigration of Zionism effectively strips Jews of their heritage and identities, as the vast majority of Jews across the world identify in some way with Zionism by retaining a connection to Israel.

The second anniversary of the murder of George Floyd on May 25 similarly highlighted the ways in which anti-Zionist groups and individuals have been appropriating his murder to double down on their vilification of Zionism and Zionists. Only this time not to universalize, but rather to localize their message. Several prominent anti-Zionist activists outrageously alleged that Israel exported to the United States the knee-choke used to murder Floyd, thus conflating the Israeli-Palestinian conflict with a domestic US story of police brutality.

Examples of this include:

The painful reality is that many anti-Zionist activists on the left misappropriate the real and undeniable pain of Palestinians to create a straw man by falsely blaming Israel for creating and exporting racism and police brutality to the United States and beyond, often as part of an attempt to delegitimize the State of Israel. But Palestinian grievances and Jewish self-determination are not mutually exclusive. In fact, such misappropriation and conflation run the risk of delegitimizing the Palestinian cause by introducing blatantly antisemitic rhetoric and tropes into the narrative. The anti-Zionist belief that one must eradicate Zionism in order for Palestinian national aspirations to be realized is a toxic notion that must be publicly repudiated.