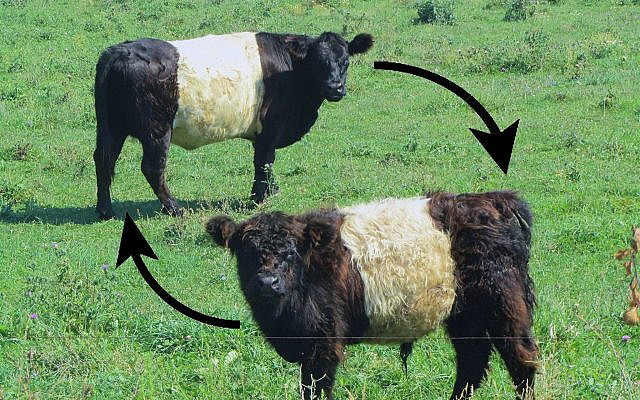 Source: https://www.flickr.com/photos/rkramer62/6132549731 (with modifications)
The Book of Leviticus concludes with a somewhat obscure prohibition known as temurah (literally, “replacement”). In a nutshell, this prohibition bans a person from attempting to transfer the holiness of one animal consecrated for sacrificial purposes unto another animal. Should one attempt to effectuate such a transfer of holiness from one animal unto another, then the Torah stipulates that both animals become consecrated and must be brought as sacrifices (Lev. 27:10, 27:33). In formulating this prohibition, the Torah uses two different verbs to denote “switching” the holiness between animals: chalifah and temurah. This article explores the connotations of those two terms and shows how they are not 100 percent synonymous.

Rabbi Yehuda Leib Shapira-Frankfurter (1743-1826) — Rabbi Samson Raphael Hirsch’s great uncle — explains that chalifah refers to switching out something worse in favor of something better, while temurah refers to switching out something better for something worse. When the Torah forbids transferring holiness from one animal to another, it does so indiscriminately. Meaning, it does not matter whether the second animal is better than the first animal or worse than the first animal — it is always prohibited.

Rabbi Shlomo Aharon Wertheimer (1866-1935) follows this basic approach with one slight tweak: He asserts that chalifah is a neutral word that refers to both switching out something good in favor of something bad and vice versa, while temurah exclusively refers to replacing something good with something bad. He works through a number of Scriptural examples that illustrate this assumption.

Rabbi Samson Raphael Hirsch (1808-1888) also follows his great-uncle’s understanding of temurah, but explains that chelef/chalifah technically refers to the act of transporting/transferring something from one place/situation to another — whether or not something else will replace it. For example, the prophet Isaiah foretells of the future vanishing of all idols by using the word yachalof to denote their disappearance (Isa. 2:18). With this in mind, Rabbi Hirsch explains that a slaughtering knife is traditionally called a chalaf because it “transforms” an animal from a state of living to a state of death. [Others maintain that chalaf in the sense of “knife” is derived from the Arabic word chalaf (“sharp”), which, in turn, is likely derived from the Herbew word charif,as the r-sound is often interchangeable with the l-sound.]

As Rabbi Hirsch notes, because chalifah applies to something which people tend to get rid of and replace with something else, it is the verb used for one who “changes his clothes” (Gen. 35:2, 41:14), and even refers to one’s outer garments themselves (Gen. 41:14, II Sam. 12:20). (In Modern Hebrew, a chalifah refers to a gentleman’s “suit.”)

As mentioned above, the Torah stipulates that should one try to transfer holiness from one animal to another, then both the originally-holy animal and the new animal become consecrated. In making this point clear, the Torah uses the term hamer yamir — two cognates of temurah — and does not repeat the phraseology of chalifah like it did earlier when forbidding the act of temurah. Rabbi Hirsch accounts for this by explaining that from the Torah’s perspective, once it is forbidden to transfer the holiness of one animal unto another, then any attempt at effectuating such a transfer will always be considered “for the bad.” So the Torah only uses cognates of temurah, which implies a negative form of switching — replacing something better with something worse — when discussing the halachic outcome of attempting to transfer the holiness. This is because, from the Torah’s perspective, such “switching” is always considered undesirable, even if the second animal is technically “better” than the first one.

The Psalmist reports about the Jews’ sin of worshipping the Golden Calf: “And they exchanged (vayamiru, a cognate of temurah) their glory (i.e. G-d) for the form of a grass-eating ox” (Ps. 106:20). Based on the above, the Malbim explains why the Psalmist uses a cognate of temurah instead of a cognate of chalifah: The Jews did not actually replace G-d with the Golden Calf, because from His perspective He remains unchanged whether or not the Jews worship Him. Thus, from the “object’s perspective” there was no change, and so the term chalifah is inappropriate. However, from the Jews’ perspective they did effectuate a change because they effectively switched Him out in favor of another deity (to be the object of their worship). Since from their perspective there was an exchange, a cognate of temurah appears in this context.

Turning to the etymology of the words in question, we begin with temurah and cognates thereof. Many Hebrew grammarians felt beholden to the triliteral theory of roots, so they explain the root of temurah as either MEM-VAV-REISH (Ibn Chayyuj) or MEM-YOD-REISH (Ibn Chayyuj, Ibn Janach, and Radak). On the other hand, other grammarians maintain that Hebrew can have roots that are comprised of less than three letters. On that side of the aisle, Menachem Ibn Saruk maintains that the root of temurah and its cognates is simply MEM-REISH.

When Rabbi Shlomo Pappenheim of Breslau (1740-1814) elaborates on the root MEM-REISH in Cheshek Shlomo, he defines its core meaning as “getting rid of something so that something else can take its place.” He finds a bevy of words which use that two-letter string that are related to this idea. For example, mohar (“bride price”) is given in exchange for a woman’s maidenhood, maher (“quickly”, “fast”) refers to something which does not remain long in one given situation but constantly changes, mar (“bitter”) refers to a sort of taste that the taste buds reject and seek to replace with something more palatable, morah (“razor”) refers to the implement used to shave one’s hair paving the path for a new lot of hair to replace those that were cut, and amirah (“saying”) refers to speech as a vehicle for the exchange of idea, especially as proper etiquette demands that the parties involved in a conversation “alternate” their position from being quiet (when it is their turn to listen) to being verbal (when it is their turn to speak).

While most grammarians understand the root of chalifah as the trilateral CHET-LAMMED-PEH, Rabbi Pappenheim writes in Yeriot Shlomo that chelef/chalifah is built on a hybrid of two two-letter roots: CHET-LAMMED (“circle”, “round”) and ALEPH-PEH (“face,” “present”). He thus understands that chalifah refers to moving forward from the “present” by pivoting away from the “current situation.” This somewhat echoes Rabbi Hirsch’s above-mentioned explanation that chalifah emphasizes that which one is “getting rid of” without focusing on that which replaces it. This stands in contrast to what Rabbi Pappenheim wrote in Cheshek Shlomo, that temurah underscores what we would call “out with the old,” while chalifah focuses on what may be termed “in with the new” (although, Rabbi Pappenheim admits that, in practice, the two words have become essentially interchangeable).

Find out more about Rabbi Klein’s book, God versus Gods: Judaism in the Age of Idolatry (Mosaica Press, 2018).