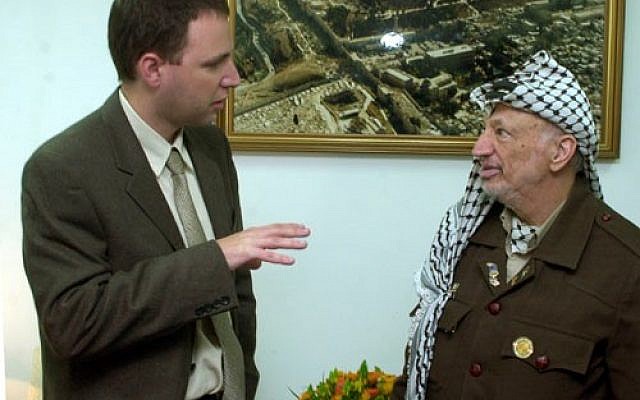 Yasser Arafat, seen here with the columnist, may get his wish at last.

Election season is upon us now, and all eyes are on the prime minister’s train wreck of a legal situation. Will the attorney general’s sly procedural delays help his master fight another day? With the government so stained, will the opposition control its impulse to walk into a wall? Will new players, a lanky general perhaps, save democracy from a Putinesque fate?

These are all fine questions, but I have an ever bigger one for each voter to confront: Do I want Israel to be wiped out, and replaced by the State of Palestine?  If the answer is yes, which it might legitimately be, then put all else aside and run, don’t walk, to vote for the Likud. If the answer is no, then don’t.

There is confusion on this point, stemming from the chasm between what Likudniks want and what their actions will beget. The intelligent among them know it, and it can be pitiful to see them squirm and amusing when they finally flip. Tsipi Livni, Dan Meridor, Ehud Olmert and others went through this, suddenly shifting left with commendable lack of shame.  The latter, asked by me in 2004 what he could possibly have once been thinking, said simply: “Sometimes, you make mistakes.”

The King of All U-turns was Ariel Sharon, undomesticated ex-nationalist extraordinaire, who turned on a dime and ditched Gaza in 2005. His Likud colleagues howled, but look carefully and see that they don’t these days advocate return. They too don’t actually want to occupy a tiny territory with a large population that hates them, despite Hamas and its rockets; they just must pretend they do.

They also don’t really want to destroy the convenient Palestinian Authority in the West Bank, despite having waged the poisonous and catastrophic campaign to prevent its establishment in the 1990s; they just have to pretend, to placate the mob. Remember: this is also the party that gave Israel hyperinflation in the 1980s and opposed the stabilization plan, that created the Lebanon occupation and opposed every stage of the pullout, that if not for opposition support would have shot down peace with Egypt, and that made a Knesset member of Oren Hazan.

So unrealistic is the right-wing position that many refuse to believe it even as they cast their ballots for the right. They assume that once in power Likud will do the opposite, at least when the time is right. And some deeply believe that it is the right that will make peace. It’s logical, in a way: it is always easier to do what the opposition wants, eliminating opposition. But it’s rare, and Benjamin Netanyahu does not appear to be in the mold of Sharon. Supporting Likud in order to end the occupation is like backing the US Republicans in hopes of transgender bathrooms and taxes on the rich.

Under these circumstances, as a public service, I offer an outline of what might follow if Likud wins a few more elections — and actually governs in accordance with its stated views, especially on Jewish settlement of the West Bank:

_ 2020: Settlers (not including east Jerusalem) hit the half-million mark.  Serious boycott initiatives finally take off around the world. These are dismissed in Israel as no big deal — just Europeans and anti-Semites.

_ 2025: The US president, a Democrat, orders a review of the automatic veto of anti-Israel moves at the UN and other world organizations. Over next two years it is dropped. US aid winds down as well. Visa-free travel to the European Union ends, and Israel is kicked out of the Eurovision song contest and the Euroleague’s basketball tournament. Israel’s per capita GDP stagnates, and as the shekel falls it stabilizes at $32k at today’s prices — only 20% lower that at its 2019 height.

_ 2027: There are now 1 million settlers not including east Jerusalem. The Palestinian Authority disbands and leading Palestinian figures demand annexation with the establishment of a single state allowing West Bank and Gaza Palestinians the same civil rights enjoyed by Israeli Arabs. The idea is rejected by the Israeli leadership (“Everyone knows Israelis reject the one-state solution,” everyone says). Military control is reestablished in some areas. Jihadist and other gangs take over others. Some years of chaos follow. Investment in Israel dries up, tech companies local and global move abroad, and the shekel falls further versus the dollar and euro (remaining level with the British pound because of troubles in the rump UK).

_ 2030: The global boycott of Israel is at a level reminiscent of what occurred with South Africa, with only the US holding out. Israel’s per capita GDP, with Palestinians excluded, falls to $20k/year.

_ 2033: The US, after years indecision and turmoil, joins the boycott of Israel in a joint news conference with the EU and South African presidents. AIPAC is bitterly opposed but J Street, supported by most US Jews and almost all non-Orthodox ones, supports.

_ 2036: Israel, under overwhelming global pressure, annexes West Bank, hesitantly extends voting rights to its Palestinians, and issues desperate pleas for massive Jewish “aliyah.” With the West Bank and East Jerusalem Palestinians (who are now all “Israeli Arabs”) finally included in the math, per capita GDP stands at $15k at today’s prices — 79th in the world.

_ 2039: The Joint Arab List wins 50 seats in Knesset election, finally toppling Likud and the right. It forms a coalition with Israeli far left — and, in an interesting twist, the Haredim, who no longer have a rightist option. Likud and Zionist Union squabble over who will lead the opposition; Likud, again, emerges on top. Opposition chief Yoav “The Shadow” Eliasi gets to meet once a month with elderly PM Ahmed Tibi.

_ 2040: The government changes the name of the country to Palestine, repeals the Law of Return allowing automatic Jewish immigration, and replaces Hatikva with a Hebrew-Arab version of “Biladi, Biladi.” In a key  concession to Jews, there is no Right of Return for the 11 million descendants of Palestinian refugees from 1948.

_ 2048: Palestine successfully negotiates annexation of Gaza, run for decades as an Islamist version of North Korea.  The conditions demanded by Hamas are for the Hebrew part of “Baladi, Baladi” to be dropped, for the Right of Return to be adopted, and for the “Principles of Sharia” to apply.  Millions, some as little as one-eighth Palestinian, stream in.  A mass exodus of secular and Ashkenazi Jews commences. By year’s end Palestine is 80% Palestinian.

There may be other scenarios, including Israel holding out and becoming a total pariah nation, or a horrendous war in which millions are expelled (it is astounding how many Likud supporters who can actually do the math admit in private that this is what they assume will happen).

It must be said that there is indeed a risk in pulling out of the West Bank, which would leave Israel about 10 miles wide in the middle. That muddles the equation, legitimately concerns even reasonable voters, and needs to be addressed (along with the moral stain of what goes on in the West Bank).

Either way the end of Zionism scenario is plausible and ironic in having been brought on by nationalists.  If it comes to pass, historians will sit around Harvard Yard, smoking electronic pipes and asking how “Start-Up Nation,” with its crackerjack TV formats and squinty celebrity chefs, blundered into such a thing.

In her book “The March of Folly,” Barbara Tuchman offered a theory that might apply: “Mankind .. makes a poorer performance of government than almost any other human activity. Why do holders of high office so often act contrary to the way reason points and enlightened self-interest suggests? … Wooden-headedness, the source of self-deception, is a factor that plays a remarkably large role…”

But what of their voters? Here I see a fascinating psychological phenomenon: Homo Sapiens are not well wired for choosing a bad option that is the least bad. Give them a snap choice between the flu and leukemia and they will hesitate, even if the default is leukemia. Israel may collectively do just that on April 9. And that type of mistake, to quote a perceptive James Bond villain, is tough to bounce back from. 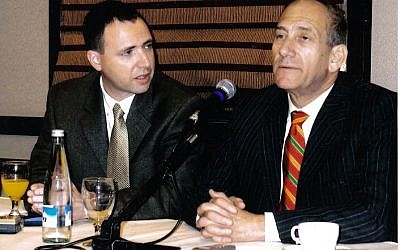 Ehud Olmert admitting in 2004 that supporting settlements was a mistake (columnist on left)
About the Author
Dan Perry is the former Cairo-based Middle East editor and London-based Europe/Africa editor of the Associated Press, served as chairman of the Foreign Press Association in Jerusalem, and authored two books about Israel. A technologist by education, he is the Chief Business Development Officer of the adtech company Engageya and Managing Partner of the award-winning communications firm Thunder11. His Substack, Ask Questions Later, is available for subscribers at https://danperry.substack.com/. Also follow him at twitter.com/perry_dan; www.linkedin.com/in/danperry1; www.instagram.com/danperry63; www.facebook.com/DanPerryWriter/; and https://muckrack.com/dan_perry
Comments