“Our opponents maintain that we are confronted with insurmountable political obstacles, but that may be said of the smallest obstacle if one has no desire to surmount it.”  – Theodor Herzl, (1860 – 1904)

Eighty-six years ago, in the year 1936, the British Government deemed it beneficial that a Royal Commission should be established immediately, to ascertain the underlying causes of what they called ‘disturbances,’ today commonly known as rebellion, which broke out in Palestine in the middle of April 1936.

A Royal Commission is an entirely independent body with no responsibility for the policy of the Government in the present or in the past. “It has considerable powers, generally greater even than those of a judge but restricted to the terms of reference of the commission. These powers include subpoenaing witnesses, taking evidence under oath, and requesting documents.”

These ‘disturbances,’ in Palestine, as reported at the time, were due to:

The ‘disturbances’ that broke out in Palestine on April 19, 1936, greatly added to the riots of 1933, and were principally a political attack, a rebellion against the Palestine Government.

However, in 1936 there was one feature, compared to 1933, which was unprecedented. The intrusion of the “external factor.” A substantial number of volunteers arrived in Palestine from Syria or Iraq, as well as Trans-Jordan, including the ultimate leader of the rebellion, Abd al-Rahim al-Hajj Muhammad, in support of their Palestinian Arab brothers. 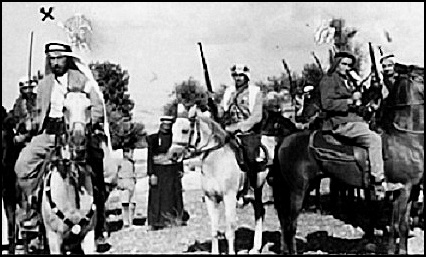 Arab rebels during the 1936 revolt in Palestine. To the left, underneath the “x” mark is Palestinian rebel leader Abd al-Rahim al-Hajj Muhammad and the last person to the right (underneath the “1”) is Lebanese volunteer Maarouf Saad who later became an MP in Lebanon. Credit: Public Domain, Wikimedia Commons.

The outcome of the conflict between Arab and Jewish Nationalism culminated in many deaths and included members of the Palestine Police Force, the Trans-Jordan Frontier Force, and officers and ranks of the British naval, military, and air.

Christians made common cause with Moslems. Assaults on Jews and their properties overshadowed all of what happened in 1933. It was reported “women and children were not spared.”

When in November 1936 the Commission visited Palestine, they not only found “two nations warring in the bosom of a single state but a conflict so wide a gulf between Arabs and Jews that it was one so difficult to bridge.”

The Commission referred to the situation as ‘tragic’, stating, “One side put itself, not for the first time, in the wrong by resorting to force, whereas the other side patiently kept the law…” They added, “No other problem of our time is rooted so deeply in the past.”

In addition, while the Commission was en route to Palestine, they wrote: “Unhappily while we were on our journey here, an incident has arisen that can hardly be said to be of assistance. One large section of the population, through its leaders, has declared that it will take no part in the work of the Royal Commission.”

With that, upon arriving in Palestine, the Commission set about its challenging task of producing a white paper titled Palestine Royal Commission Report. It was published in the U.K. in July 1937.

The Report as a whole is an extraordinary work, containing over 230,000 words in its 404 pages, plus appendices, maps, as well as a graph of future trends in population.

Because of the space allocated for this article, the vast content of the Report cannot be written about here. However, I will quote two pieces from it. They were written eighty-five years ago.  Neither of them, I doubt, will surprise you.

“The apex of the Jewish educational system is the Hebrew University of Jerusalem. The main purpose of its foundation was as a centre for post-graduate research in science and the humanities; but the demand for university education among Jews has been so great that there is now a considerable body of undergraduates. The university has departments of Jewish Studies, Oriental Studies, General Humanities, Mathematics, Physics, Chemistry, Botany, and a number of allied sciences; also a special department devoted to Cancer Research. There is a staff of 27 Professors, besides Lecturers and junior staff, and in 1935 there were 391 students, about 30 per cent of whom received their education in Palestine, the remainder coming from other countries, notably Poland. The university is relatively well provided with laboratories and class-rooms; its excellent library is constructed and catalogued on modern lines, and on its magnificent site on Mount Scopus, it possesses ample room for a further building when funds permit.

“It is remarkable to find on the fringe of Asia a university which maintains the highest standards of western scholarship. On its staff are names well-known in Europe and America. Its research work can compare with that of many older institutions.”

The Reports’ Conclusion (in part):

“Half a loaf is better than no bread,” is a peculiarly English proverb, and considering the attitude which both the Arab and the Jewish representatives adopted in giving evidence before us, we think it improbable that either party will be satisfied at first sight with the proposals we have submitted for the adjustment of their rival claims. For Partition means that neither will get all it wants. It means that the Arabs must acquiesce in the exclusion from their sovereignty of a piece of territory, long occupied and once ruled by them. It means that the Jews must be content with less than the Land of Israel they once ruled and have hoped to rule again… For it offers each what it wants most, namely freedom and security.”

The Conclusion added, “… we did not fully realize the difficulties of the task it laid on us. We have tried to overcome them, not always with success. They have steadily become greater till now they seem almost insuperable.”

To quote Theodor Herzl, (1860 – 1904) “Our opponents maintain that we are confronted with insurmountable political obstacles, but that may be said of the smallest obstacle if one has no desire to surmount it.”

And what of today?