The Blogs
Avi Zimmerman
Apply for a Blog
Please note that the posts on The Blogs are contributed by third parties. The opinions, facts and any media content in them are presented solely by the authors, and neither The Times of Israel nor its partners assume any responsibility for them. Please contact us in case of abuse. In case of abuse,
Report this post. 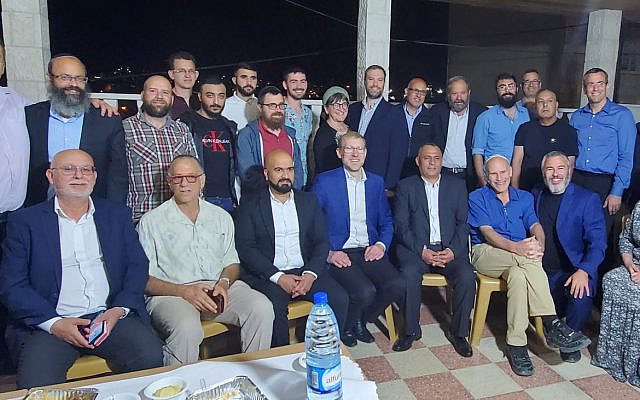 Israelis and Palestinians gather for iftar

It’s not every day that Israelis living in the West Bank are hosted by Palestinians to an iftar, the traditional fast-breaking meal during Ramadan. Between language barriers and checkpoints, there’s little opportunity for casual interaction among the neighboring populations. Fortunately, a growing community of businesspeople has developed a formula that builds networks, fosters relationships and signals how incremental progress can lead the way to monumental achievements.

Ever since the 1993 Oslo Accords, Palestinians and Israelis have had limited access to one another’s communities. In hindsight, dividing the West Bank into Areas A, B and C served not to substantiate a Palestinian state but to segregate populations. Inevitably, organic social interactions decreased in frequency and intensity as friendships were relegated to the workplace.

More than an incidental haven for interpersonal relationships, the workplace has become the mainstay of regional economic stability for Palestinians and Israelis alike. Today more than 150,000 Palestinians are employed by Israeli companies and the entrepreneurial drive that characterizes both populations generates innovative partnerships and new, mutually productive business models. This is how the regional economy grows, one business at a time.

The Judea and Samaria Chamber of Commerce and Industry was established in 2017 with the goal of increasing economic opportunities for both Palestinians and Israelis. The organization gathered a group of Israeli and Palestinian founders with a common interest in shared prosperity. Focusing on what binds its 600 members instead of the differences between them, the volunteer staffed non-profit group promotes business opportunities without getting involved in politics. It’s this safe space that allows for productive, open and relatively unhindered dialogue.

As he has in previous years, Haj Ashraf Jabari graciously hosted Palestinian and Israeli businesspeople in his home for an iftar. Because it is located in a Palestinian neighborhood of Hebron, Israeli guests could not drive directly to Ashraf’s residence. Instead, they parked their cars at the nearest access point and were shuttled to Ashraf’s home by Palestinian guests. Beyond the logistical challenge of a well-timed rendezvous for a variety of guests battling evening rush hour, there were the added elements of security coordination with the Israeli Defense Forces. The complexity of the production contributed to the intrigue of those who had never ventured into Palestinian Hebron before.

There’s something about a twilight arrival at an off-limits destination that draws one into an immersive experience. The echoing call to prayer in the background further enhances the ambiance, and a warm welcome from the host makes everyone feel at home. With the tomb of the Biblical Abraham, or Ibrahim of the Koran, just a stone’s throw away, guests were imbued with a sense that their common ancestor was smiling upon their gathering. The iftar accommodated guests according to their preferences. Both halal and kosher food options were available. Sitting on the large balcony, participants were invited to address the group over Turkish coffee after enjoying their meal.  Ashraf opened with sincere blessings for all those who attended. He introduced his Palestinian guests and then gave the floor to the Israelis to voice thoughts, impressions and plans for future business partnerships.

For some, the evening was their first iftar experience. Guests invariably opened their remarks with an expression of gratitude to Ashraf for the gracious hospitality and to the Palestinians present for engaging in synergistic conversation. Personal introductions included a mix of anecdotes, celebratory blessings and ambitious business proposals. Plans for the Field Integrated Innovation Accelerator to advance Israeli-Palestinian business partnerships, inter-population trade projects and a hotel that caters to both communities were among the initiatives discussed. Marketplace discussions were then met with commitments to more elementary projects, such as a broad based educational program to teach spoken Arabic to Israeli businesspeople and municipal leaders. Economics seamlessly blended with society as the eclectic group of participants explored next steps towards regional growth.

One of the highlights of the evening was the contingent of participants from the United States who joined the iftar via Zoom. The leadership of the Integrated Business Roundtable (IBR), a group of impact investors committed to increasing the capacity of Palestinian-Israeli business partnerships, was present with cameras open, eyes surveying the room and ears perked for intermittent English remarks. IBR Chairman Mike Humphrey introduced the team and spoke of the initial one million shekel that they invested in two companies a few months earlier. He recognized the courage of the Palestinians and Israelis to chart a path for the emerging economy, adding with encouragement that further private capital was on the way.

Additional participants included representatives of the US Israel Education Association (USIEA), an organization that has brought Members of Congress to Ashraf’s home in the past and has plans to lead another delegation to the region this summer. USIEA has consistently advocated for integrated business and shared prosperity as the preferred approach to social justice and conflict resolution. As in person and virtual guests blended heartfelt remarks with strategic planning, it became apparent that public policy can complement and multiply the budding partnerships and promote their success.

The recent passage of the Middle East Partnership Fund for Peace Act is a perfect example of how policy makers took a fresh look at the region, pivoting from top-down conflict resolution to bottom-up opportunities for Palestinian entrepreneurs and people-to-people reconciliation. Ultimately, business is driven by people, and markets are developed through relationships. Predicated upon a set of mutually beneficial guidelines, every business partnership represents a building block for measurable progress.

An annual Ramadan gathering of Israeli and Palestinian business partners piques curiosity, inspires entrepreneurship and enlists domestic and international partners. But the private sector has a limited reach, and it can benefit greatly from carefully engineered public policy. By embracing the pioneering potential of the emergent Israeli-Palestinian economy, public-private partnerships will power new successes for a region that is ripe for shared prosperity.

About the Author
Avi Zimmerman is the President and CEO of the Integrated Business Roundtable and the President of the Judea and Samaria Chamber of Commerce and Industry.
Related Topics
Related Posts
Comments