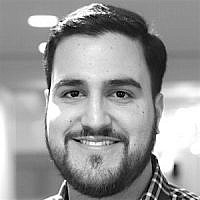 The Blogs
Sebastián Parra
Apply for a Blog
Please note that the posts on The Blogs are contributed by third parties. The opinions, facts and any media content in them are presented solely by the authors, and neither The Times of Israel nor its partners assume any responsibility for them. Please contact us in case of abuse. In case of abuse,
Report this post.

Prior to 2016, the civil war in Colombia was categorized as the longest one in history. I have personally lost many members of my family due to this conflict and we even had to flee the violence in 2006 and come to America where we received political asylum. More than 220,000 Colombians have died and millions more have been displaced. However, the Palestinian Diplomatic Mission in Colombia is unbothered by this fact.

The night of Thursday, October 19, 2017; the official Twitter account of their delegation, wrote a disgusting message of hatred and division as they quoted former Palestinian leader Yasser Arafat: 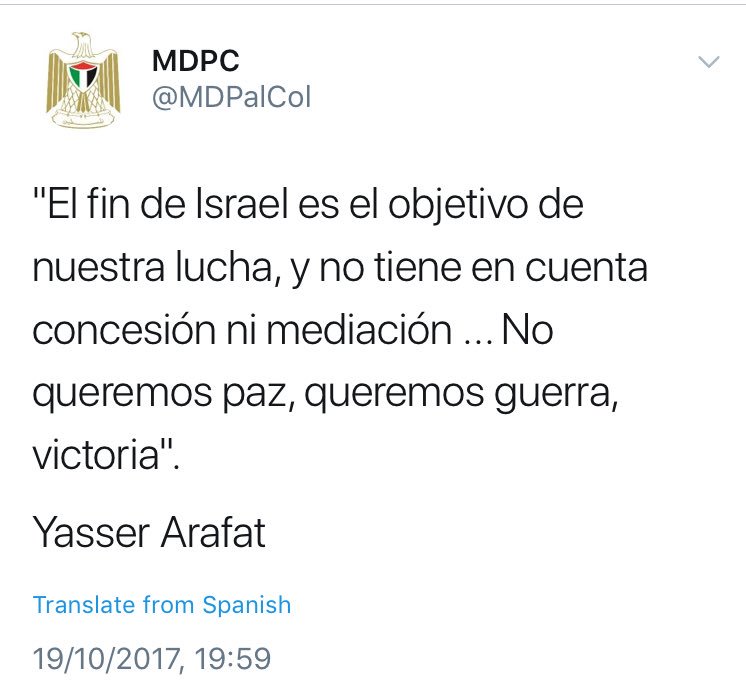 “The end of Israel is the goal of our struggle and does not take into account concession or mediation … We do not want peace, we want war, victory.” Although they have already deleted the Tweet, until this moment, they have not retracted or offered a proper apology on their social media or official website.

These Palestinian diplomats are evidently blind. They are in a country that has said “NO MORE!” to war and #YesToPeace (#SiÁLaPaz has been the national campaign for peace in Colombia). After more than 50 years suffering under the cruelty of the terrorists, Colombia today is a country that embraces reconciliation and lays down its weapons. Something that the idolized Yasser Arafat never had the courage to do.

In 1993 Arafat signed the Oslo Accords, recognizing for the first time the Israeli State while Israel agreed to help create the Palestinian Authority. This was celebrated as the starting point of a path to an elusive peace agreement between Israelis and Palestinians. But in 2000, Arafat rejected a far-reaching Israeli peace proposal, made no counter-offer, and launched a bloody terrorist campaign or “Intifada” that left thousands of Muslim, Christian, and Jewish Israelis dead or wounded. Arafat passed away in 2004, he could have left a legacy of peace and reconciliation, instead, he became the father of modern terrorism, airplane hijackings, and suicide bombings.

There have been over five major peace proposals made on the basis of two states for two peoples (1937, 1947, 2000, 2008, 2014) but tragically Palestinian politicians have rejected all of them denying their people the gift of peace. Now they seek to broadcast this destructive ethos in Colombia.

The memory of Arafat does not deserve any association with peace and his words have no place in Colombia, my country. The bellicose rhetoric of the Palestinian delegation in Colombia is not welcomed either. The number one rule in diplomacy is to not interfere in the domestic affairs of the host country. What a shameless gaffe by these people to preach war in a country that, with blistered hands, seeks to build peace.

Netanyahu also said that Colombia has experienced “enormous change and progress” thanks to democratic stability and the recent peace accord that has been signed. Israel and Colombia also certified the renewal of the “Colombia Israel Innovation Fund” which brings the two nations even closer. Moreover, an Israeli named Tal Becker, a member of the Israeli peace negotiating team was involved in the negotiations that eventually led to peace in Colombia.

In short, the contrast is inexcusable and embarrassing for the Palestinian Diplomatic Mission in Colombia. It is now clear: Israelis help us build peace while Palestinian politicians incite us to war.

About the Author
Sebastián is the Hispanic Outreach Coordinator for StandWithUs. He currently resides in Atlanta and blogs from the point of view of a former Israel-hater turned Zionist.
Related Topics
Related Posts
Comments
Advertisement