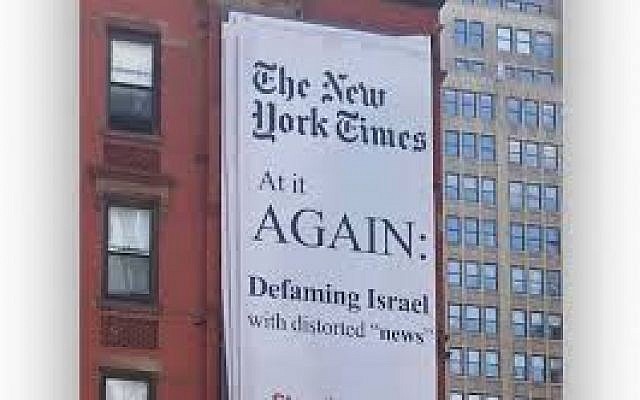 The above title might as well have been the headline for the exceedingly long front page article in The New York Times last Sunday, December 30, by David Halbfinger. In it, the reporter elevates a young Palestinian woman, Rouzan al-Najjar, to the status of a martyr, if not a saint.

I can’t help but notice the similarity of blaming Israel in the Times’ coverage of Israel with that of UNESCO, the UN agency that has, in Prime Minister Netanyahu’s recent statement, “… passed 71 resolutions condemning Israel and only 2 resolutions condemning all other countries combined. This is simply outrageous.” Both Israel and the US have resigned from the Israel and Jew-bashing UNESCO agency to protest its blatant and constant smearing of Israel. (You know Judaism is being attacked when the WesternWall, Temple Mount, and other seminal Jewish sites are declared to be Muslim holy sites, not Jewish ones.)

If it were possible, I’d like to see a similar blow to The New York Times, which has unsurpassed influence in the largest single Jewish metropolitan area (New York) and the US at large. The Committee for Accuracy in Middle East Reporting in America, CAMERA.org, has been carrying on this fight against the NYT for many years – an uphill battle. From the Camera site: “In a 4700-word story [by Halbfingfer] about a Palestinian medic killed in Gaza border violence, there is no mention of the thousand Hamas rockets fired into Israel in 2018 and Israeli families sleeping in shelters. There is no mention of Hamas chieftains leading chants of ‘Death to Israel.’” There was also little context providing the background of the conflict. Also absent was an accounting of the constant violent, deadly attempts to kill Israeli soldiers and civilians by Gazans at the border, such as hundreds of rockets fired indiscriminately into Israel, fire bombs, countless aerial fire attacks via balloons and kites, etc.

Here is the beginning of this skewed NYT article: “A young medic in a head scarf runs into danger, her only protection a white lab coat. Through a haze of tear gas and black smoke, she tries to reach a man sprawled on the ground along the Gaza border. Israeli soldiers, their weapons leveled, watch warily from the other side. Minutes later, a rifle shot rips through the din, and the Israeli-Israeli-Palestinian drama has its new tragic figure.” In truth, the medic’s fatality was a “win” for Hamas, which utilizes civilians as both shields and throwaway victims to gain sympathy in the West.

How dramatic, how fraught with anguish over the poor Palestinian Arabs is this prose. According to several sources, nearly 200 protestors (about 80% affiliated with terrorist groups according to Israeli spokesmen) have been killed in this most recent campaign to infiltrate Israel. The world has been incessantly told by the media that this is a cruel campaign by Israel, which indiscriminately kills poor innocents like the medic, al-Najjar.

The border campaign began in early spring of 2018. Since then there have been about three dozen Friday protests, each numbering thousands of demonstrators/attackers at the border dividing Gaza from Israel. The number of people who have shown up at the border fence, to see the “show” or for far more nefarious reasons, exceeds 100,000. Obviously, if Israel were not constraining itself to harm as few people as possible, the casualties would be much, much higher.

It is preposterous to maintain that the IDF would intentionally kill a medic, or any non-violent demonstrator. But what’s going on at the border is war, and we all know what happens in war: chaos. With black smoke from burning tires set alight by Palestinian Arabs obscuring the vision of the Israel’s border defenders, plus clouds of non-lethal tear gas used as a non-lethal deterrent by the Israeli defenders, it’s a tribute to the IDF that casualties are so low. Let’s not ignore the fact that lethal attacks against the IDF are common, causing live fire to be aimed at them.

The medic al-Najjar, now a “martyr,” knew full well the danger that she put herself in every time she ran towards the front. The article notes that she ignored many calls from family and friends to stop putting herself in harm’s way. It also states that she made many statements that seemed to welcome imminent “martyrdom.” It should be remembered that the lifetime payments made by Hamas and the Palestinian Authority to those who die for the “cause” (or are imprisoned for having killed or wounded Israelis) are generous enough to make the families of the “martyrs” wealthy by local standards. This potential motive cannot be ignored.

My complaint is that the NYT could have easily had a strong, emotional article about Israeli victims of Muslim terror, such as the recent shooting that resulted in the death of a pregnant woman’s baby and the death of two soldiers (https://www.haaretz.com 12/21/18) or another deadly, unprovoked attack. But no, this front page indictment of Israel in praise of a woman who knowingly placed herself in extreme danger is one of many NYT articles that puts the blame on Israel for protecting itself, compared to very few casting Israel in a positive light.

Like UNESCO, the NYT is guilty of continuous criticism of Israel, to a degree that is obviously part of a strategy to undermine support for Israel. With many military and terrorist forces around the globe killing innocents indiscriminately, it begs the question, Why single out Israel so disproportionally for defending itself, unless the objective is to vilify and delegitimize it?

I hope that critical readers of the NYT and other media get the message that CAMERA’S billboard conveys: Israel is purposefully being defamed.

From the Shurat HaDin website:
The recent NY Times front page article (12/30/18) labels the shooting of Rouzan al-Najjar “reckless at best, and possibly a war crime, for which no one has yet been punished.” It contends that IDF troops deliberately fired upon the woman who was clearly marked as a medic. For its part, the initial IDF investigation has concluded that al-Najjar was either wounded by a ricocheting bullet or was utilized as a human shield by the Hamas terrorists leading the violence, as no IDF sniper has been identified as having fired upon the woman.

In the coming year, the legal team in Shurat HaDin will continue to respond to these baseless allegations of war crimes. We will continue our efforts to go on the offense against the accusers and pursue our own war crime allegations against the terrorists, their leaders and the outlaw regimes that support them. No claim against Israel nor against the IDF by the Palestinians or the international organizations will go unanswered.