Hype about a small administrative change to a 1996 US federal regulation illustrates the ways in which the Palestinian propaganda (and disinformation) machine works. This public relations campaign, which turned prudent security measures into nefarious censorship cabals, was enabled by large contributions from “progressive” political donors (including US-based foundations and the governments of Switzerland and Germany).

To unravel the process, I go back to 1994, when, as an Israeli participant in an academic conference on space and security (based on my doctoral dissertation), I attended a presentation on the Clinton Administration’s post-Cold War plans to remove restrictions related to high-resolution images taken by commercial satellites. I wrote an analysis of the security implications, which was circulated among American and Israeli officials. This was the beginning of the Kyl-Bingaman Amendment (1996) to the Defense Authorization Act, which placed limits on commercial satellite imaging of Israel.

As I noted in a series of academic publications and conference presentations, on issues related to sensitive space-based strategic intelligence, Israel is an exceptional case. A very small country under threat of massive attack from conventional and unconventional forces (particularly Iraq and Syria, at the time) is severely limited in deploying defensive and deterrent capabilities, making Israel vulnerable to a surprise first strike. With the addition of very high-resolution space images available for purchase by potential attackers, including Palestinian and other terror groups, and in real-time (unlike systems operated by Russia and others, which took months to fill orders), the threat to Israel would have been much higher.

Furthermore, following negotiations with the White House in the late 1960s, Israel had agreed not to test or reveal any details about its ambiguous nuclear deterrent capability (“don’t ask, don’t tell”.) As part of this very successful effort to avoid a chain of nuclear proliferators in the Middle East, space-based images of Israeli nuclear facilities were highly restricted. If detailed photos of the Dimona nuclear complex were routinely publicized, this would have changed the essential conditions to this contribution to stability. Understanding these concerns, the regulations were adopted, and served the purposes for which they were intended.

Now skip forward 24 years — to July 2020 — when the National Oceanic and Atmospheric Administration revised the limitations regarding imaging of Israel (from a minimum 2 meters to 40 centimeters), based on the improvements in technology, new Middle East strategic realities, and greater availability from non-US suppliers. Additionally, Israel now operates its own advanced reconnaissance satellites, giving it a major advantage over Iran, Hezbollah, and Palestinian terror groups. 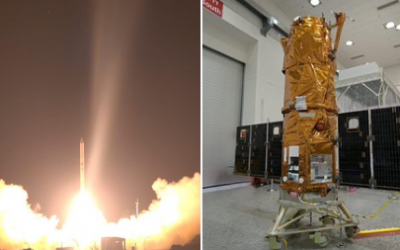 In sharp contrast, according to the propagandists, this minor change was turned a great political victory for the Palestinian cause. Foreign Policy’s headline screamed “Israel Can’t Hide Evidence of Its Occupation Anymore”, as if the questions of territorial control and construction over the pre- and post-1967 armistice lines, and similar issues were involved. As the record shows, these were entirely irrelevant to limits including in US licensing for commercial imaging satellites. For those whose main objective in life is to measure Israeli, Palestinian and (unauthorized) European government construction in the West Bank, there are numerous other and less costly sources. The same is true regarding claims related to the surveying of ancient sites, as promoted by archeologists who awkwardly disguised their anti-Israel ideological campaigning in the form of academic analysis in the Space Policy journal. Repeated references to “censorship” made good fodder for political warfare, but have no basis in fact.

This disinformation campaign was led by a well-financed US-based non-government organization (NGO) known as Al Shabaka. Zena Agha, the author of the tendentious Foreign Policy opinion piece, is employed by Al Shabaka, and has a long list of publications that promote anti-Israeli disinformation. (According to the NGO’s website, “Her areas of expertise include Israeli settlement-building in the occupied Palestinian territory with a special focus on Jerusalem, modern Middle Eastern history, and spatial practices.”)  Her triumphalist propaganda piece on satellite imaging and censorship was also pushed intensively on Al Shabaka’s social media accounts.

Al Shabaka has an annual budget of over $500,000 – a mid-sized member in the long list of NGOs dedicated to demonizing Israel. Their 2018 donors include the governments of Switzerland and Germany (through one of the country’s taxpayer funded left-wing and anti-Israel “political foundations”), as well as the US-based Rockefeller Brothers Fund and Open Society Foundation. The donors all claim to be promoting peace, transparency, and democratic values, but in reality, the funds they provide fuel ongoing and ideological warfare and specious “victories”.

Surely there are better ways to spend the money.