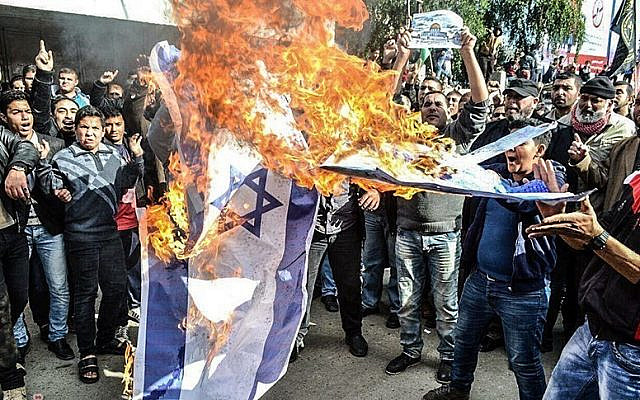 Palestinians burning the Israeli flag in Gaza in December 2017 after the US announced its recognition of Jerusalem as the capital of Israel (credit: Tasnim News / Wikimedia Commons).

A running joke within the pro-Israel community is that every day is a “day of rage” for the Palestinians. That isn’t exactly true, but it isn’t far from the truth either. Just recently, various Palestinian factions declared a “day of rage” in support of six escaped murderers. This latest “day of rage” should help achieve Palestinian statehood any day now… I’m being cruel perhaps, but it’s hard to be sympathetic in the face of an endless self-defeating anger that achieves less than nothing for the Palestinians. Why not channel their energies towards supporting nation building rather than supporting murderers?

If any people has the right to be angry, it’s the Jews. Between the years 1941 and 1945, six million Jews were murdered in cold blood and under horrific conditions. If the Jews had come out of those years transformed into terrorists, it would not have been surprising, but instead of hating, destroying, and having “days of rage”, they summoned all their energies and all their courage to build a state despite enormous obstacles. They built by far the most democratic, the most egalitarian, the most diverse, the most respectful of human rights, and the most successful state in the Middle East today or at any time in history.

The Palestinians were offered a state in 1947 through the United Nations Resolution 181. Instead of seizing the opportunity of having a state of their own for the first time in history, they and their Arab allies were angry that they weren’t given all the land, and they rejected the offer, starting a war with the Jews that is still ongoing 74 years later. That war still has no end in sight because the Palestinians have continued to reject every solution offered to them and because there is no sign that this will change anytime soon. The Jews, on the other hand, accepted United Nations Resolution 181 even though they, like the Palestinians, would have preferred not to share the land.

But the Palestinians aren’t alone in engaging in self-defeating anger. Canada just had an election during which anti-vaccination activists threw their support behind a new libertarian right-wing party, the so-called People’s Party of Canada whose leader Maxime Bernier proudly announced that he refuses to get vaccinated. In doing so, they helped re-elect Liberal leader Justin Trudeau (who promised to force all employees of the Canadian government to get vaccinated against Covid-19) by taking votes away from the Conservative Party whose leader Erin O’Toole opposes mandatory vaccinations for civil servants. If anti-vaccination activists had not let their anger dictate their actions, they could have elected a prime minister who at least respects their right to not be vaccinated even though he supports the drive for vaccinations.

Another example of anger not producing the desired results is the National Rally party in France. Because no other party ever agrees to form a coalition with them, they elect few members of parliament, and they have never won a presidential election. This is because the National Rally party is seen as xenophobic and even racist, and no other party wants to be tainted by that. If the party’s supporters chose instead to support more traditional and moderate parties who have a chance of being elected, they could achieve some gains on the issues that they are most concerned about, such as reducing the levels of immigration.

A prime example of anger failing to achieve results is of course the United States where right-wing anger against entitlement and elitism led to the election in 2016 of Donald Trump, the most self-entitled and elitist president in US history. Trump also owes his election to many angry left-wing activists who stayed home rather than vote for Hillary Clinton who had defeated their preferred candidate Bernie Sanders in the Democratic primaries. Some of them even voted for Trump out of spite. By refusing to vote for Clinton, the radical left facilitated the election of someone whose policies are largely the opposite of Sanders’.

Anger is a normal human emotion, but letting anger blindly drive major decisions is not healthy or productive. The Palestinians and many other groups would benefit from cooling down their anger and looking at the Jewish people as a role model of what they should do instead. The Jews’ model behavior is not only in the past but also in the present. As Israel continues to face terrorist attacks and daily threats of attacks by Palestinian factions who reject the very existence of Israel, the Jews are facing the most virulent antisemitism since WWII, an antisemitism that often uses the Palestinians as an excuse.

And yet, Israel has not allowed anger to dictate its decisions. Israel continues to defend itself with the same high ethical standards. It even recently proposed a recovery plan for Gaza which some Palestinians praised but which Palestinian representatives have predictably rejected.

The stubbornness of the Jewish people in taking the high road even when by any reasonable standard, they would be more than justified to let themselves be controlled by anger, is honestly surprising. I don’t always understand it. But this Jewish trait is perhaps the explanation behind the Jewish people’s longevity despite having faced discrimination, rejection, resentment, and violence throughout their long history. Perhaps the Jews understand better than other peoples that anger is a self-defeating emotion when it becomes one’s way of life. Others would do well to learn that lesson.