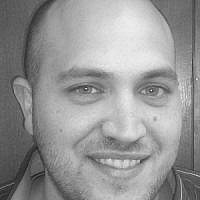 The Blogs
Shraga Weissmann
Apply for a Blog
Advertisement
Please note that the posts on The Blogs are contributed by third parties. The opinions, facts and any media content in them are presented solely by the authors, and neither The Times of Israel nor its partners assume any responsibility for them. Please contact us in case of abuse. In case of abuse,
Report this post.

The country is on fire, every half an hour there are new stories on the news of yet another terrorist trying to kill us. Not to mention the myriad of attacks that never make it to the news. Make no mistake, when a Palestinian is throwing a rock at a car it is not because they really just want to see your face. They want you dead, they want me dead, they want all of us dead! I have no illusions that any current peace process has the solution, nor do I believe that it’s a coincidence that we are Jews, but please stop calling them animals!

When an animal attacks and kills it is sad but inevitable. You don’t put down all dogs just because one bit a child. No one cares, it is the natural order of things. Animals have no rhyme and reason they do as they feel, they simply follow their instincts without thinking.

People do not. They have reasons, albeit not normally good ones, but there is a rational line of thinking. Fadi was a 19-year-old student who lived in East Jerusalem. His life was fine and from his pictures and those of his home, it can be discerned that he was well off, even affluent. He did not snap and lose his mind, nor was he an animal. He was a murderer, a terrorist, even a bad person.

When we call him an animal we ignore all that. Instead of vilifying his actions we are justifying them

When we call him an animal we ignore all that. Instead of vilifying his actions we are justifying them.  Why did he do what he did? This question can only be asked of people, not of animals.

We know the answer: hatred, racism, and education. Fadi and other Palestinians are taught to hate Jews and Israelis. They are taught that there is nothing worse than Jews.

Our news needs to come out with the pictures of Fadi. We need to say that he is a normal kid but he was taught to hate Jews. We need to show the world that he is the norm and not an aberration. The Palestinian people want us dead. Let us acknowledge that fact and then figure out how to move forward.

About the Author
After graduating from Ner Yisroel in Baltimore, Shraga attending Yeshiva (YSMZ) in Israel and decided to stay. He moved to Beit Orot, a Hesder Yeshiva on Har Hazeitim and joined the Golani Brigade. He spends his time working, studying for his M.B.A, and reading Dr. Suess to his 3 children.
Comments