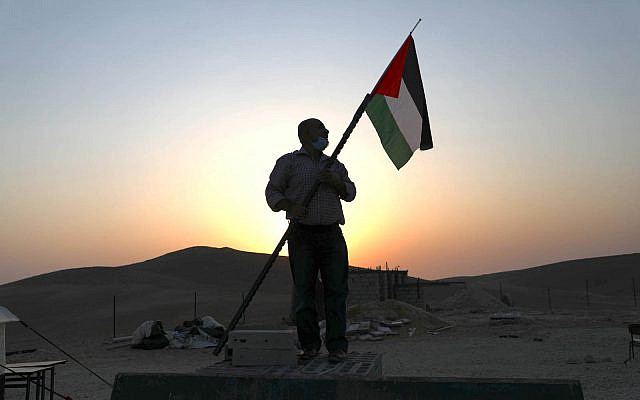 Illustrative: A teacher prepares a tent classroom at Am Kusa Bedouin community near the West Bank city of Hebron, September 8, 2020. (Wisam Hashlamon/Flash90)

Given the extent of the damage the Trump presidency inflicted on Palestinian interests, US President-elect Joe Biden’s administration will reverse several of the positions that Trump adopted. However, there will not be a broad effort to undo policies and return to the status quo ante. True, a Biden administration would not have moved the US embassy from Tel Aviv to Jerusalem or lent legitimacy to Israeli settlements on Palestinian lands, nor would it have recognized Israel’s annexation of the Golan Heights. But now that these policies are in place, Biden has already stated he will not overturn the US’s recognition of Jerusalem as Israel’s capital nor will he move the US embassy from Jerusalem back to Tel Aviv – a policy change which he personally criticized.

The reason for not undoing certain policies is clear: Reversing them carries substantial cost.

The “gifts” Trump handed to Israel at Palestinians’ expense are now facts on the ground with continued support from a built-in constituency, including Evangelical Christians, congressional Republicans along with a good number of Democrats, pro-Israel lobbyists and Israel’s current government.

Given these restrictions, Biden and his foreign policy team will, most significantly, shelve the Trump peace plan that favored Israel to an extreme and ignored international law and UN Security Council resolutions. On the other major issues affecting Israel and Palestine, Biden is committed to taking the following steps:

Support a two-state solution: Biden will resume US support for a two-state solution – one Israeli and one Palestinian. Antony Blinken, Biden’s nominee for secretary of state, outlined Biden’s foreign policy, saying that “the prospect of achieving a two-state solution in the Middle East and that outcome, two states for two people, in my judgment and the Vice President’s judgment, more importantly, represents the best way and probably the only way that you’ll have a secure future for Israel as a Jewish and democratic state and a state for the Palestinians.” Blinken added that “any unilateral action by either side that makes that prospect even more difficult and more distant is something that the vice president opposes and would oppose as president. We’ll see what Israel chooses to do but ideally, obviously, it won’t pursue it and we will find ways to rebuild an environment in which is possible for the parties to reengage in the direction of two states.”

Resume ties and aid to the Palestinian Authority: Biden’s transition team has already been in touch with Palestinian representatives in Ramallah. The Palestinians described those exchanges as “encouraging.” In a call with Arab-American advocates, Blinken stated that Biden would reverse “some” of Trump’s policies affecting the Palestinians such as restoring aid to the Palestinian Authority (PA), the United Nations Relief and Works Agency for Palestine (UNRWA), and East Jerusalem hospitals. The Biden administration is expected to reopen the US Consulate in East Jerusalem – which could serve as the future US embassy to Palestine once a Palestinian-Israeli peace agreement is signed – and, allow the PLO’s office to reopen in Washington.

Reject BDS but not prosecute its supporters: Despite Biden’s opposition to the Palestinian-led Boycott, Divestment and Sanctions (BDS) movement, which seeks to boycott Israeli products worldwide, Blinken stated that Biden would “protect the constitutional right of our citizens to speak freely.” By comparison, Secretary of State Mike Pompeo announced, during his last visit to Israel in November, that the US government going forward will consider the BDS movement to be “antisemitic,” and he called the movement “a cancer.” The US, Pompeo declared would cut support to any groups that engage in it.

Oppose annexation: After having suspended its annexation of some 30 percent of the West Bank, as outlined in the Trump peace plan, in return for normalization of ties with the UAE, Israel’s prime minister, Benjamin Netanyahu and succeeding prime ministers, will find it very difficult to put the issue of annexation back on the table. Israel would have to consider the implications of such a move on its relationship with the UAE, which conditioned normalizing ties with Israel on suspending the annexation. The UAE’s negative reaction to such a move, as well as the stated position of the Biden administration, which opposes Israeli annexation of Palestinian territories, will ensure that Israel will not move toward annexing any parts of the West Bank.

In short, in order to facilitate Biden’s support for a two-state solution, “two states for two people,” as Blinken affirmed, the Palestinians have to be proactive and not just settle for Biden’s handouts. The Palestinians are now facing a great challenge. They have to “find ways to prevent further erosion in the Arab world stance vis-à-vis the Palestinian issue, and, critically convince other Arab leaders, especially among Gulf monarchies, not to follow UAE’s steps of normalization with Israel.”

The Palestinians should consider the advice of one of Israel’s more insightful columnists, Haviv Rettig Gur, who wrote in The Times of Israel that, “if [the Palestinians] wish to change Israeli policy and behavior, they must convincingly explain to Israelis that a withdrawal is not the catastrophe-in-waiting that so many expect. The Palestinians must give the Israelis something to lose, or rather something to gain that might justify the risk of abandoning some significant portion of the West Bank highlands.”

The Palestinians must ink a plan of action and the steps necessary to jumpstart the Israel-Palestine negotiations. Israel’s current government will be content with Biden’s policies, which will largely extend the status quo. The Palestinians do not have the leverage that Israel has in the United States. They never will. They should take that as a given. Admittedly, the oscillating statements and policies emanating out of Netanyahu are confusing and have eroded any confidence in Israel. However, what if Israelis, including Netanyahu, do not know what they want? Have the Palestinians considered that possibility?

The Palestinians should focus their efforts on designing an action plan that will be too compelling for the United States and Israel to ignore. Enough of putting the blame on others for the lack of progress in the negotiations with Israel. The European Union, the Arab and Muslim countries, and the majority of countries around the world are worn-out and are ready to see an end to the Palestine-Israel conflict. The UAE, Bahrain, and Sudan’s normalization with Israel are the tip of the iceberg of what is to come.

The Palestinians should take the initiative. They must. And they should look at what motivates the ordinary Israeli to support a Palestinian state. Would Israelis prefer peace over annexation? Yes, they would. Israelis supported overwhelmingly (77 percent) giving up on the annexation of some 30 percent of the West Bank to achieve normalization of ties with the UAE. With that critical insight in mind, the Palestinians must put forth reassuring and practical proposals that would allay the fears of the average Israeli and provide ordinary Israelis with peace of mind and a sense that their personal security will not be compromised if Israel agrees to the establishment of a Palestinian state.

Yes, I know the Palestinians are occupied and oppressed but, they hold the key to their own salvation. I disagree with Dr. Hanan Ashrawi, a member of the executive committee of the PLO when she states that, “We are the only people on Earth asked to guarantee the security of our occupier… while Israel is the only country that calls for defense from its victims.”

In my view, the guarantee of security is exactly what the Israelis need to relinquish to the Palestinian lands they currently occupy. The Palestinians can achieve an independent Palestinian state alongside Israel with minimal territorial concessions to Israel. Concessions that the Palestinians have already agreed to accept, such as the swap of land in return for Israel’s annexation of the major settlements adjacent to the Green Line, within the framework of a comprehensive and final peace agreement with Israel.

Palestinians need to write their own history instead of waiting for others to hand them down what it is theirs. If Abbas requests to go tomorrow to address the Israeli Knesset and make a genuine offer of peace, without the empty slogans, I believe that the majority of Israelis will consent to a Palestinian state in return for peace, personal security, and, yes, the recognition of Israel as a Jewish state. It is an undeniable fact that 80 percent of Israelis are Jewish.

President Abbas, muster your courage! You are an old man yet you can still leave with the greatest legacy by paving the road for peace for the sake of future generations of Palestinians and Israelis.