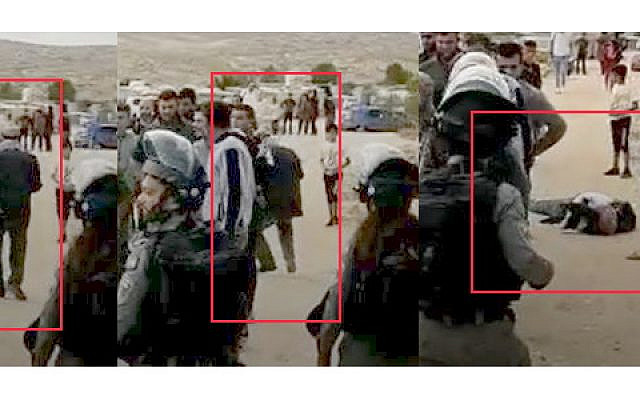 Why did international and local reporting from a ginned-up “altercation” between IDF troops and Palestinians become part of an anti-Israel libel – despite video evidence showing the dust-up to be faked?

Anti-Israeli social media is rife with accusations that “Jewish settlers” in the “West Bank” – i.e. Judea and Samaria – attack their Arab neighbors with impunity daily, and foes of the Jewish State unquestioningly accept the Arab narrative of settler violence. Multitudes of articles in the Israeli and foreign press then repeat the canard, while one can count on one hand competing – or, at least, more comprehensive and reliable  — accounts.

In many cases, purported video and photographic “evidence” supporting the accusations against the Israelis are quickly uploaded to news and social media sites. IDF soldiers have told me that videos are edited to only show the portion depicting the soldiers’ responses to harassment in the propaganda war in which feelings trump facts. The complete videos with the context within which the soldiers were responding are not publicized. Therefore, when a video showing the cynical abuse of naive news consumers’ trust does become public, it should be considered newsworthy by a great number of outlets.

This, however, is apparently is not the case.

The video below was filmed by Jewish residents of the village of Susya during a demonstration on 24 September, 2021 near a disputed Arab outpost, Khirbet Susya (Khirbet meaning “on the ruins of”).

Susya is also the site of an ancient synagogue active between the 4th and 9th centuries CE followed by its conversion into a mosque and later populated by Crusaders and then, abandonment. It’s reconstructed synagogue, massive mosaics, and ongoing archaeological dig all bear stark witness to the site’s Jewish origin. From the Ottoman Empire on, however, shepherds from the nearby Arab hamlet of Yatta would pitch temporary tents and lean-to’s in order to graze their flocks among the ruins over the winter.

While the legal battle to determine the fate of the Arab outpost is still ongoing, the article depicts Susya’s Jewish residents, who had gathered to protest the outpost’s continued illegal expansion. IDF soldiers served as a barrier between them and counter-demonstrators: Arabs from the vicinity and Israelis from leftist NGOs. The video shows that there was no contact between the two separate groups. Pay particular attention to the middle of the screen at the :20 second mark:

One can clearly see a male demonstrator sit down on the ground and then put himself into a prone position. Nobody touched him at any stage of this odd behavior. He was surrounded by his fellow demonstrators and there were no soldiers or Jewish Israelis near him. He just calmly sat down, and then lay down, on the ground.

You can hear the photographer and those near him laughing, with one joking: “Look! Look! He laid down for fun!”

Another added: “Hey, it’s as if something happened to him. Now all the leftists are taking pictures of him: Look! He fell! Whoa!”

Journalist Elisha Ben-Kimon posted on his Twitter account both the video and images of the Palestinian ambulance crew taking care of him, and published his expose’ in Ynetnews: Injured or Pretending: Palestinian Demonstrator Documented Falling Unhurt.

The title implies that the demonstrator was faking his supposed injuries; the opening sentence states that a demonstrator was documented “falling” on the ground without having been assaulted, pushed, or otherwise touched by anyone around him. And the video incontrovertibly leads one to come to that conclusion. (For some reason, the sound in the video uploaded onto the Ynetnews article had been removed so nobody can hear the laughter and derisive comments.)

We have seen this kind of image doctoring before: “Pallywood,” a term coined by historian Richard Landes referring to the intentional staging of injury – and even death – at the hands of presumably murderous Israelis.

The tone of the rest of Ben-Kimon’s article, however, seems intended to distract readers from the video of the faked injury. A collection of photographs, not only of the “fallen-but-unhurt” demonstrator receiving medical care, but also of demonstrators and of soldiers, serves to draw our attention away from the Pallywood scene that was supposedly the point of this article.

And who was this “fallen-but-unhurt” demonstrator? Rateb al-Jabour, who, according to his Facebook page, is no less than Coordinator of the National and Popular Committees against the Annexation Wall and Colonies in the Yatta Region, and teaches at the village’s school.

Al-Jabour seems to be a regular fixture at demonstrations in the area. On that day at Susya, the agent provocateur’s participation was, however, a bit more dramatic than usual. He has not yet responded to my requests for comments on his performance.

Yohai Damri, Chairman of the South Hebron Hills Regional Council, provided a statement claiming that those who lie regarding their illegal outposts gobbling up Israeli state land will continue to lie and this video is just one example of the Palestinian fake news industry that is exploited by anti-Israeli organizations.

The effect of Israeli press neglect in this matter is that the Arab language press (for example, here) has been using the image of al-Jabour on a stretcher 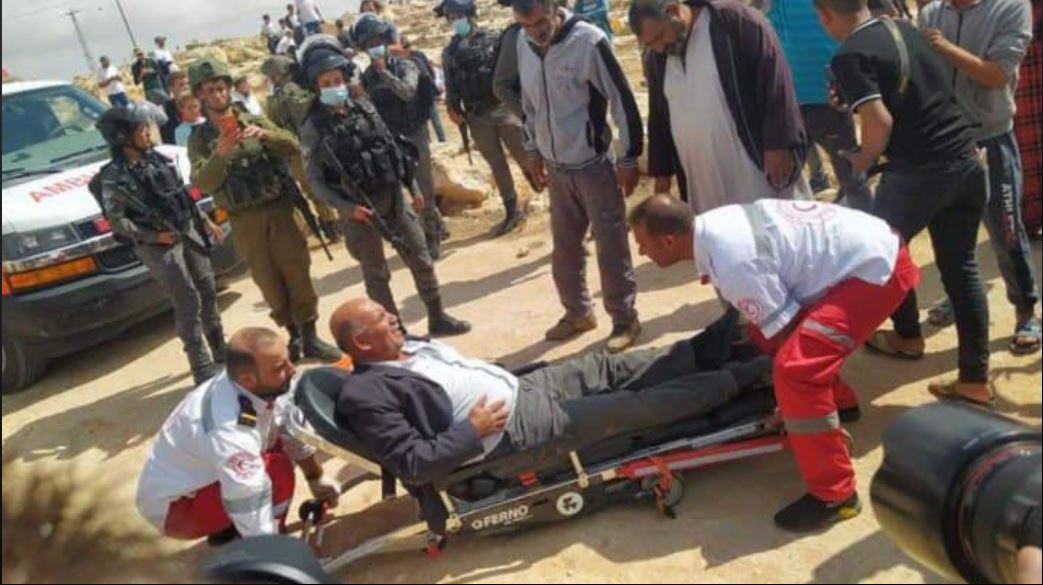 Image that has been shared in countless Arab news sites and social media without showing the video that proves this is fake.

to spread the lie that:

“A number of citizens were injured and bruised, including the coordinator of the committees against the wall and settlements in south Hebron, Ratib al-Jabour, today, Friday, when settlers attacked them in the village of Susiya, near Yatta, south of Hebron.”

One is also a number, I suppose, yet had readers been shown the video of the fake “fall” they would have doubted the entire accusation leveled against the settlers — in this instance at least.

The question is: why did this video not get more attention in local and international news and social media?

Given the usual reports on demonstrations in Judea and Samaria, violent or not, this video seems like a “man-bites-dog” kind of incident that old-school journalists – those of integrity, at least – might consider themselves lucky to find.

About the Author
Sheri Oz, owner of www.israeldiaries.com, is a retired family therapist exploring mutual interactions between politics and Israeli society.
Comments