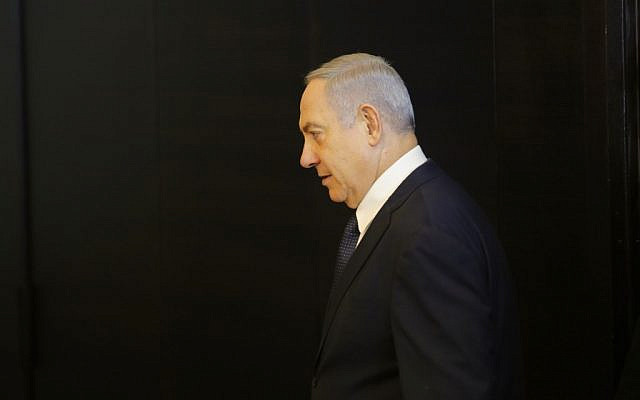 Prime Minister Benjamin Netanyahu arrives to deliver a statement regarding his intention to file a request to the Knesset for immunity from prosecution, in Jerusalem on January 1, 2020. (Gil Cohen-Magen/AFP)

On Monday, it’s off to elections we go — yet again. And from what the winds are blowing, there might be another. Again. And again, and again…. Of course, the definition of insanity is doing the same thing over and over again — and expecting different results. I don’t know how many “over agains” qualify as insane. T’would seem to me three is enough.

As to how to resolve this, it is really quite simple. We will just adopt King Solomon’s model.  Since Solomon’s Judgment involved a court case, we will use legal rules to decide the current impasse, and since this is a fantasy case, I will take some liberties with legal process. For our “summary judgment” motion, then, we will take the positions of the parties as they claim them, and assume they are correct.

First: We have Bibi and his Likudniks. They claim “Bibi, Bibi, there is no one like Bibi.” Others phrase it differently, but with the same meaning: “From Bibi till Bibi, none came close to Bibi.” Now actually, as matters stand, the voters voted for Likud, not Bibi. Oh well.  But both Bibi and his Likud promise a government to the right, and only the right, so there isn’t much daylight there. This, they say, is a “true” government with a “true” leader – the only “true” leader, our Parent, our Guardian, King Bibi.

Second: We have Gantz & Co. (G&C) They want a unity government. Not just any unity government, though, just one without Bibi – as they will sit in coalition with Likud. Now Gantz & Co. have had, are going to have, and will have for the foreseeable future – the same number of mandates as Bibi, or almost the same. Wishing this away won’t change things.

Third: Then we have Liberman: Ditto to G&C. So, for the sake of simplicity, we can simply lump him in with G& C’s position.

Let’s assume Bibi is, indeed, the genuine best candidate to parent his people (and that’s the rule here, we’re assuming the position of each of the parties is correct).  And let’s play Solomon. Faced with two women claiming to be the “true” mother, each claiming the child was hers – the wise king, as well all know, ordered the child be cut in half and evenly split.

Now the “true” mother, I am sure, felt that she would be the “better” mother, the one who would best love, nurture and guide her infant.  But she was willing to abdicate her role, to waive her claim. She was willing to relinquish all the benefits raising that child would entail, both to her and to her child. She was willing to give her child up — to someone else who was less suited to parent the child  — in the interest of her child’s existential survival.

So, Bibi, if you really are the “true” leader, and you see your people committing insanities? Are you really willing to let us go to a 4th election?  Are you going to cling on, cutting the country down in the process?

With the Coronavirus certain to take an economic gulp out of our economy, and the Gaza situation looming at our doorstep, we cannot sustain the costs of another election, nor the limitations of an interim government. We are going to need immediate, permanent decisions to take on new budgetary constraints, deal with defense issues, grapple with the educational embarrassments our latest figures demonstrate.  If you want to hang on, you can delude yourself into thinking you may eventually win – on the fifth or sixth or seventh ballot, but you will dismember the country in the process.

Perhaps Gantz will not be another Bibi. But with your abdication, Bibi, Yuli can take over. Yuli likely will be able to negotiate a great deal for Likud, maybe even start off the rotation. With just Likud and Gantz, you won’t have to waste ministry seats on outlier parties – you can keep most for your own. Think about that, Papa Bibi.

A true leader who loved his people would not subject them to this merry-go-round. He would not dismember his people to save his own skin – even if he and his believers felt he would be the better leader.

Now, I can hear the Bibi-niks saying, so why doesn’t Gantz step down?

Because it wouldn’t change a thing. Even if Gantz did not oppose Likud’s bloc, Likud still can’t form a coalition.

Because G&C and Likud can form a coalition. G&C will sit with Likud. It’s Likud, under Bibi, who can’t sit with him.  It’s the Bibi part that’s breaking up the possibility of a coalition.

And if you ask why Gantz won’t sit with Bibi –we tried that already – and it doesn’t work. Bibi and Gantz just don’t get on. (Remember that definition of insanity).

Stand down, Bibi, if you are the true leader, and let your people go.