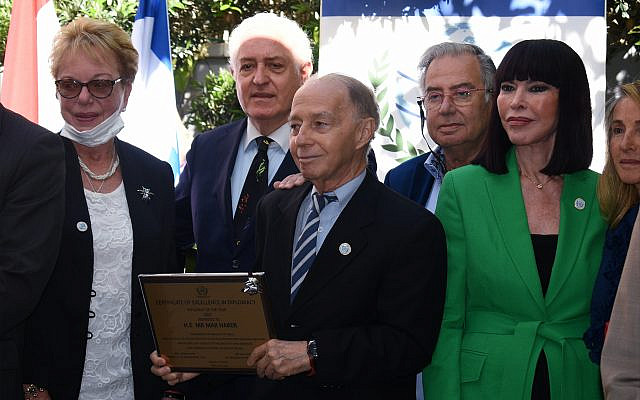 Max Haber, Paraguay's longtime ambassador to Israel, receives a plaque recognizing him as "Diplomat of the Year" during an April 13 ceremony in Herzliyya. (Larry Luxner)

HERZLIYA — In recent years, the bilateral relationship between Israel and Paraguay has fluctuated between hot and cold, to say the least.

In May 2018, the landlocked South American nation of 7.1 million transferred its embassy from Tel Aviv to Jerusalem—the third country to do so after the United States and Guatemala—in a much-publicized ceremony led by Paraguay’s visiting president, Horatio Cartes and Israeli Prime Minister Benjamin Netanyahu.

At the time, Netanyahu called it “a great day for Israel” and proclaimed, “we have no better friends than you. Thank you, Horacio. Thank you, Paraguay.”

Only four months later, his successor, Mario Abdo Benitez, abruptly reversed the decision and moved the Paraguayan Embassy back to Tel Aviv. 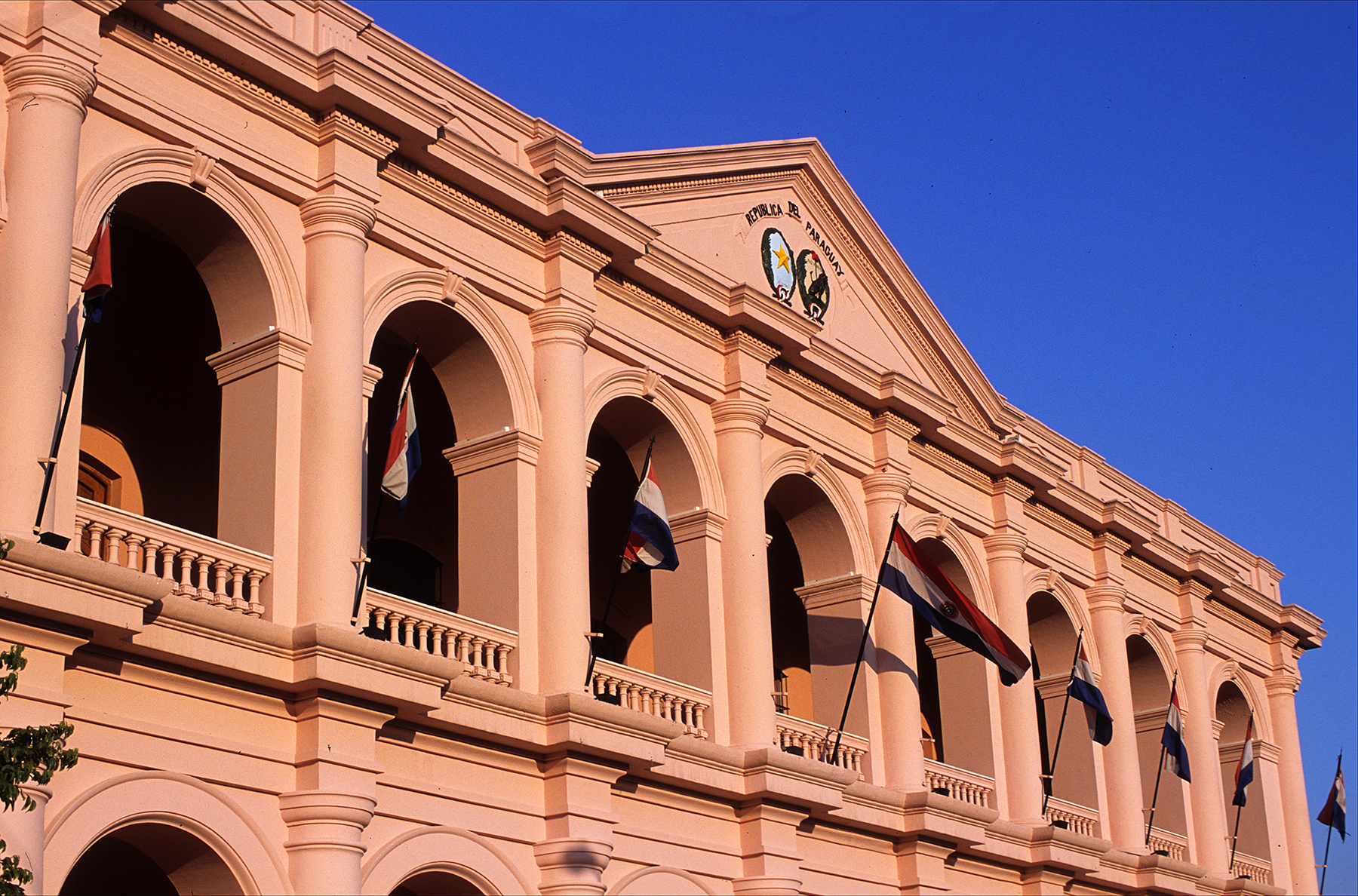 Within hours, a furious Netanyahu ordered Israel’s embassy in Asunción, which had reopened only two years earlier after having been shuttered for budget reasons, to close immediately.

Through it all, veteran Paraguayan Ambassador Max Haber, 78, has tried to keep things as cordial as possible. For his efforts, the Ambassadors Club of Israel yesterday presented Haber with its 2021 “Diplomat of the Year” award at a reception attended by some 40 dignitaries.

The outdoor event, held at the Herzliyya office of businessman Yoram Naor, marked a farewell of sorts for Haber, a Paraguayan Jewish entrepreneur of German origin who’s represented his country in Tel Aviv, Jerusalem and again Tel Aviv since late 2013. 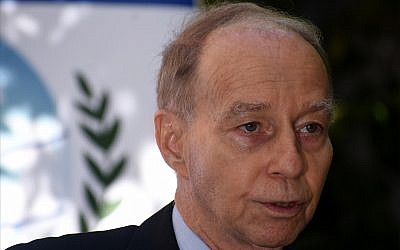 “Today, we are honoring the ambassador of Paraguay, but through him we also honor Latin American and Caribbean diplomacy, characterized by its positive and friendly approach to Israel,” said Yitzhak Eldan, the club’s president and former Israeli envoy to Denmark and UNESCO. “Each Israeli Independence Day reminds us of the precious and decisive diplomatic support Israel received at the United Nations in November 1947 from Latin American countries, Paraguay among them.”

Before taking up his current position, Haber—an electrical engineer by training—spent 13 years as Israel’s honorary consul in Asunción, so he’s seen the relationship from both vantage points. In addition to some Hebrew, Haber is fluent in Spanish, English, Portuguese, German and Guaraní (an indigenous language spoken mainly in Paraguay). 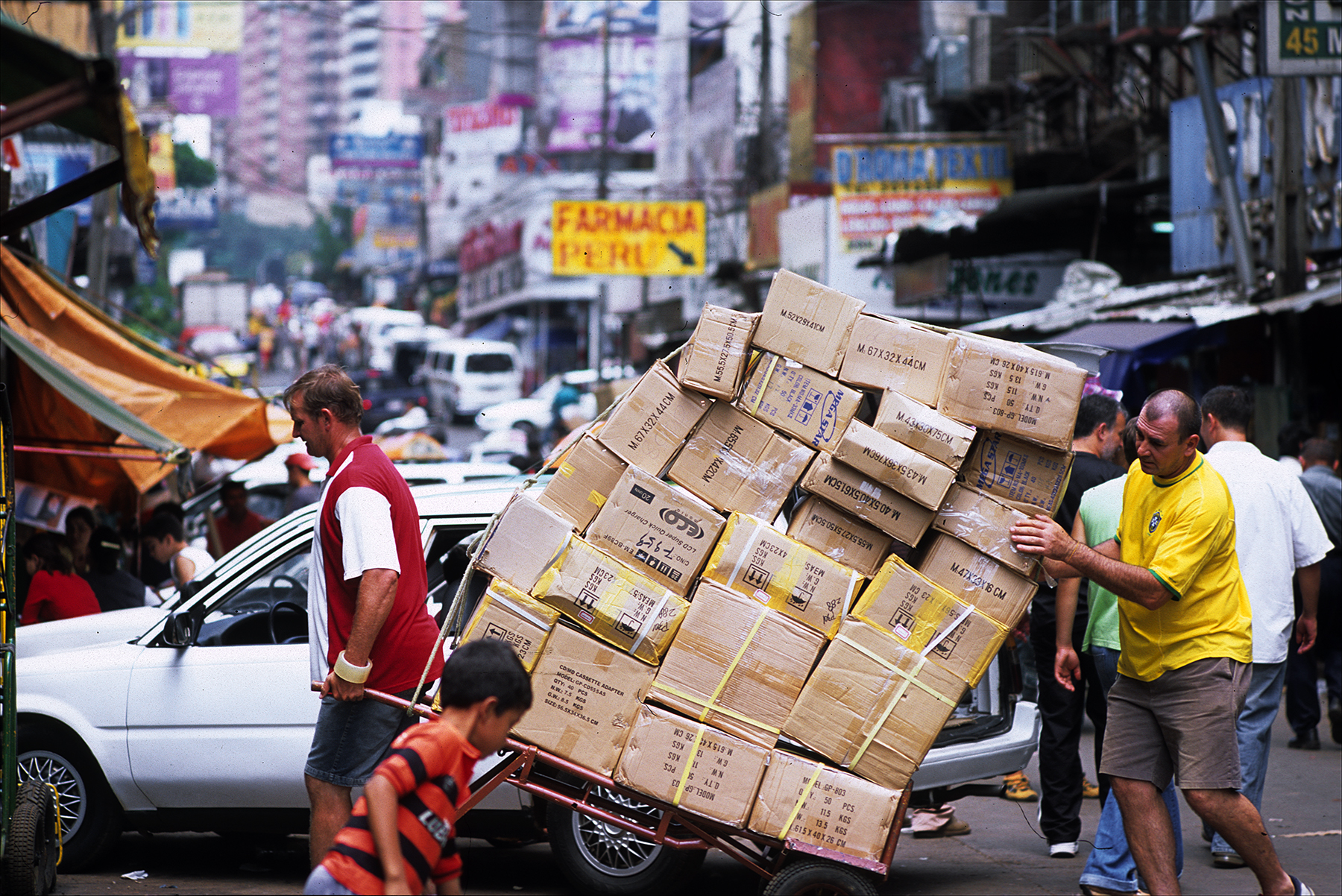 Men haul boxes full of contraband through the dusty streets of Ciudad del Este, a town on Paraguay’s border with Brazil. (Larry Luxner)

“For over 20 years, our dear friend has been investing his precious time bringing Israel and Paraguay together, building bridges,” Eldan said. “This alone is a reason to give you the award.”

Haber has long been dean of both Israel’s diplomatic corps as well as the Group of Latin America & Caribbean (GRULAC). With his imminent departure, the new dean will be Zambia’s ambassador here, Martin Mwanambale. And the dean of Israel’s GRULAC will be Honduran Ambassador Mario Castillo.

Gil Haskel, the Israel Foreign Ministry’s chief of protocol, noted that Haber is the only still-serving ambassador who presented his credentials to the late Shimon Peres; all the others were received by Israel’s current president, Reuven Rivlin.

“I would really like to congratulate you on a fantastic term as ambassador,” Haskel told Haber. “This was a turbulent relationship, a term that had its ups and downs. You succeeded thanks to your temperament, patience and demeanor as a seasoned diplomat. You were the only ambassador who moved back and forth to Jerusalem and Tel Aviv. And who knows, you may still move back to Jerusalem.” 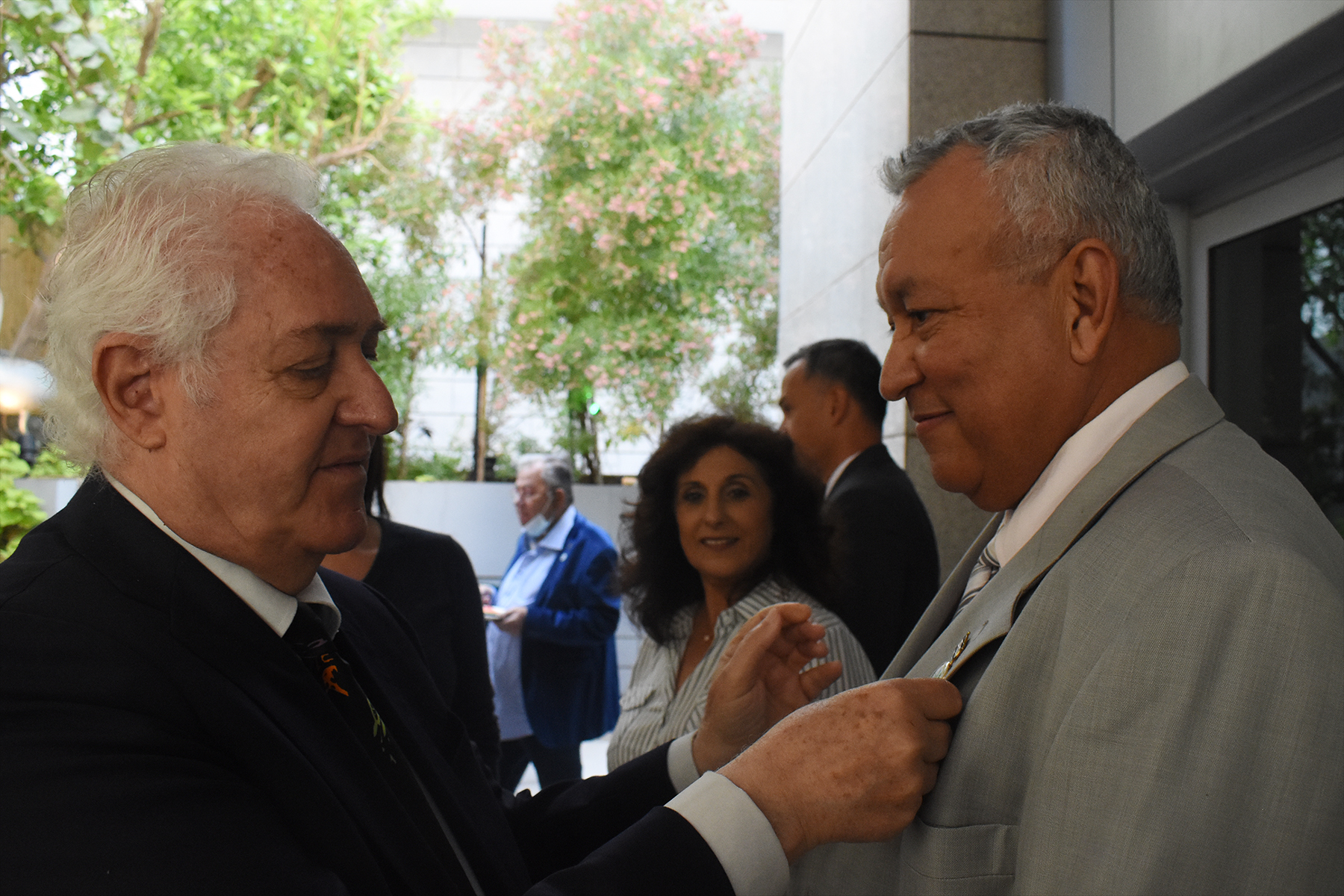 Eldan, speaking on the eve of Israel’s Yom HaZikaron, said Paraguay’s noted that the first diplomatic victim of terror in Israeli history was Edna Pe’er, a secretary at the Israeli Consulate in Asunción. She was killed on May 4, 1970, along with a local employee, when two armed Palestinians broke into the mission and began firing their weapons. The terrorists were later arrested and sentenced to long prison terms.

Ruth Amit Fogel is both Paraguay’s honorary consul in Israel and vice-president of the Ambassadors Club of Israel, which she helped establish 10 years ago in the same building where yesterday’s event took place.

“I am thrilled to be the one to bestow this honor upon you. I know more than anybody attending this ceremony who you are and what your values are,” Fogel told Haber. “We started to work together seven and a half years ago, and we have accomplished a lot. Your remarks and feedback have always been a source of inspiration for me.” 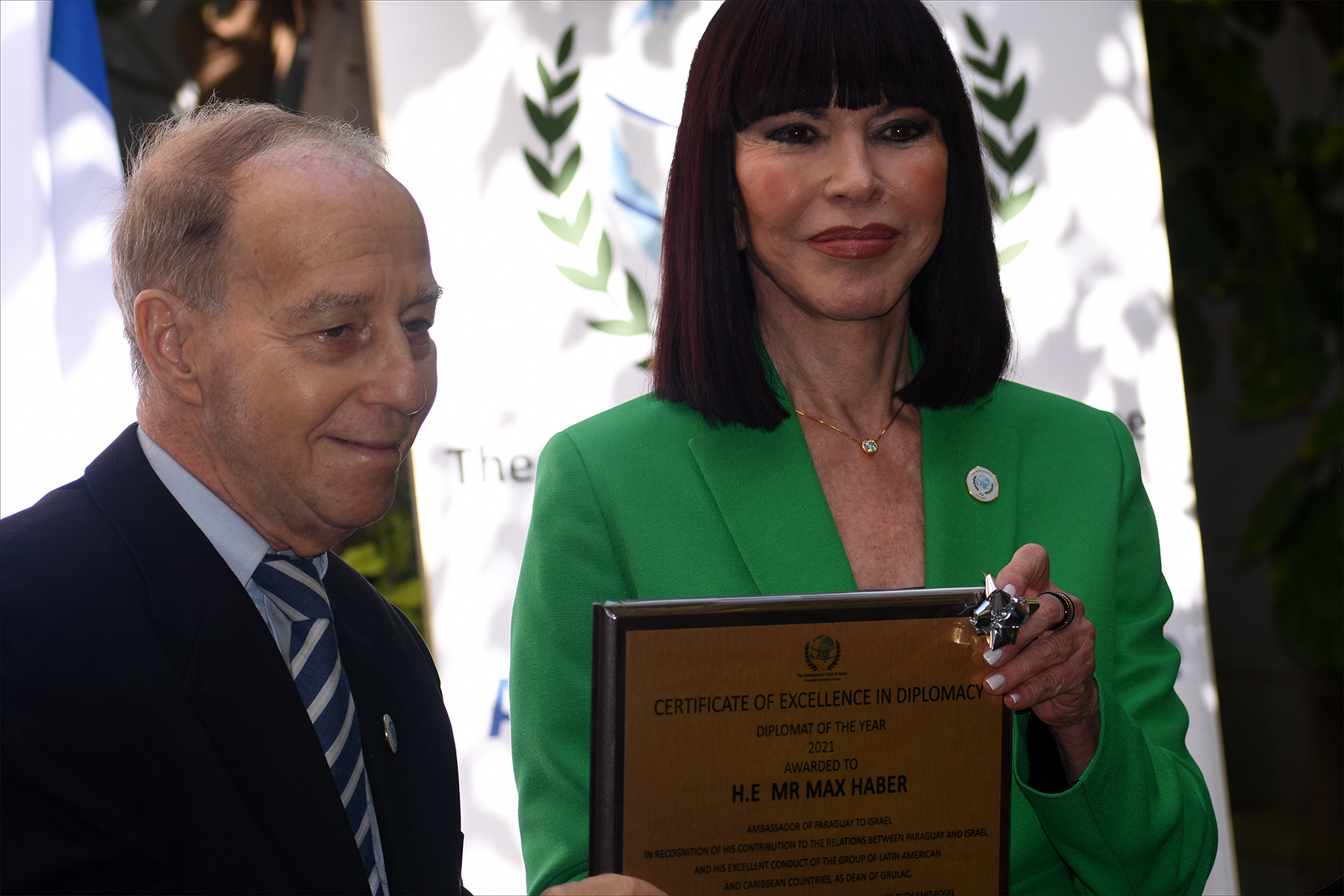 In accepting the award, Haber said he was proud to have reopened the Paraguayan Embassy in 2013 after a 12-year closure. Another important accomplishment, he said, was the 2007 free-trade agreement signed between Israel and Mercosur, a regional bloc composed of Argentina, Brazil, Paraguay and Uruguay. That FTA was Mercosur’s first-ever with any country outside of Latin America.

Bilateral trade today comes to $130 million a year, $100 million of which are Paraguayan kosher meat exports to Israel. The remainder consists mainly of Israeli agricultural, fertilizer and high-tech shipments to Paraguay. 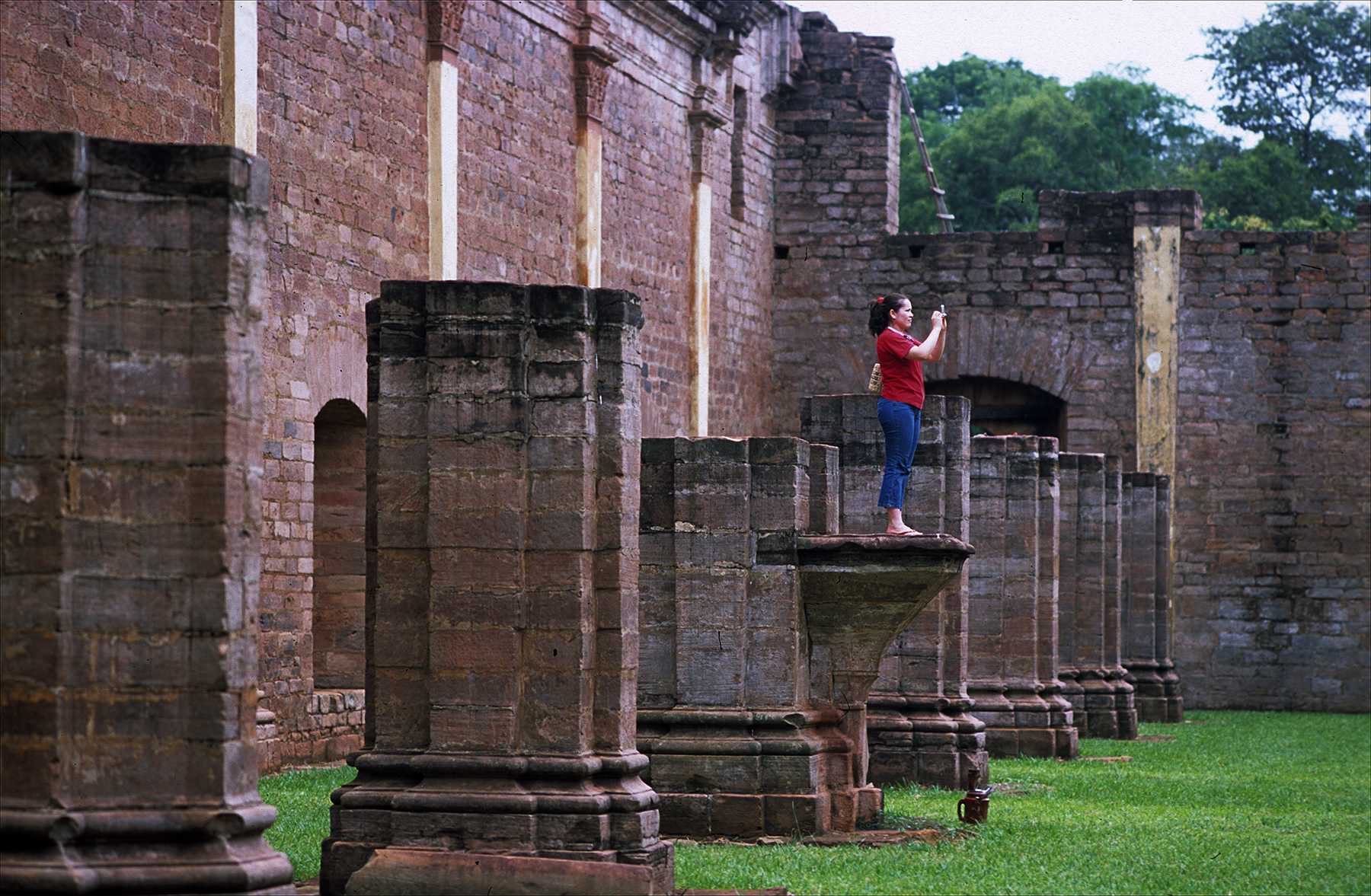 A visitor takes photographs of an abandoned Jesuit settlement at Jesús de Tavarange, near Encarnación. The ruins, a UNESCO World Heritage Site, are among Paraguay’s top tourist attractions. (Larry Luxner)

In a brief interview following the ceremony, Haber expressed regret at Israel’s 2018 decision to close its embassy in Asunción but said he hopes the Netanyahu government will reconsider that decision.

“We only moved 70 kilometers, from Jerusalem to Herzliyya. We never left the country,” he said, declining to discuss the politically sensitive matter in depth. He added: “We are confident that Israel will reopen its embassy in Paraguay shortly.”