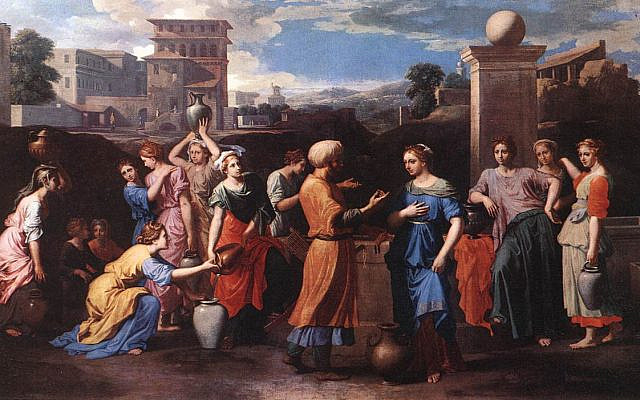 Rebecca at the Well by Nicolas Poussin, 1648, Musee du Louvre.

This chapter, Hayyei Sarah חיי שרה, “the life of Sarah”, is mercifully short.  It contains four important stories : first, the death of Sarah; second, the love-at-first-sight between Isaac and Rebecca and their marriage; third, the death of Abraham and his burial by both of his sons, Isaac and Ishmael and, finally, fourth, the line of Ishmael in detail.

Sarah’s lifetime—the span of Sarah’s life—came to one hundred and twenty-seven years. Sarah died in Kiriath-arba—now Hebron—in the land of Canaan; and Abraham proceeded to mourn for Sarah and to bewail her. (GEN 23:1,2)

The rabbis have many comments about the death of Sarah, the first matriarch. Some say she died when she learned that Abraham planned to sacrifice Isaac and did not tell her his plans.  Some say she died because she could no longer tolerate a world with an unjust Gd (remember she laughed at Gd). We will never know and the Torah is silent. However, the irony of the title, given her immediate death, suggests simply that Sarah died of a broken heart because, in some ways, she lost both her husband and her son all at once.

2. And Isaac went out walking in the field toward evening and, looking up, he saw camels approaching. Raising her eyes, Rebekah saw Isaac. She alighted from the camel and said to the servant, “Who is that man walking in the field toward us?” And the servant said, “That is my master.” So she took her veil and covered herself…. Isaac then brought her into the tent of his mother Sarah, and he took Rebekah as his wife. Isaac loved her, and thus found comfort after his mother’s death. (GEN 24: 63-67).

This is love-at-first-sight in the Torah (it’s not a romance novel!).  Rebecca blushes, veils herself; Isaac falls immediately in love and on the first night they marry.**

Rebecca at the Well by Nicolas Poussin circa 1648. Musee du Louvre.

3. This was the total span of Abraham’s life: one hundred and seventy-five years. And Abraham breathed his last, dying at a good ripe age, old and contented; and he was gathered to his kin. His sons Isaac and Ishmael buried him in the cave of Machpelah….. (GEN 25:7-9)

At 175, I think we can all agree that Abraham died at a “good, ripe, age”! Kidding aside, the moving and important point in these lines is that both Ishmael (the elder brother) and Isaac (the younger, favored brother) come together to bury their father.  Once again, the story of Ishmael from birth to death (see next) is vital in the story of Abraham. And, to bring us to our day, the descendents of both sons are part of one family (which does not necessarily make it easier for them – aka for us – to get along!).

4. This is the line of Ishmael, Abraham’s son, whom Hagar the Egyptian, Sarah’s slave, bore to Abraham.  These are the names of the sons of Ishmael, by their names, in the order of their birth: Nebaioth, the first-born of Ishmael, Kedar, Adbeel, Mibsam, Mishma, Dumah, Massa, Hadad, Tema, Jetur, Naphish, and Kedmah. These are the sons of Ishmael and these are their names by their villages and by their encampments: twelve chieftains of as many tribes. These were the years of the life of Ishmael: one hundred and thirty-seven years; then he breathed his last and died, and was gathered to his kin. They dwelt from Havilah, by Shur, which is close to Egypt, all the way to Asshur; they camped alongside all their kinsmen.(GEN 25:12-18)

We have known Ishmael from his birth to his death. Though not an Israelite, he is family. The Torah’s attention to Ishmael is telling and moving.  Abraham’s love for Ishmael did not falter.  The two were circumcised together and he (Abraham) was terribly distressed, distraught, when Sarah asked that his son be banished and only agreed when he understood (from Gd) that he had to make a terrible choice between his marriage and his son.  Knowing his son was with Hagar, his (Ishmael’s) mother, allowed him (Abraham) to move forward though not without bitter regret and terrible pain. I have already mentioned the Abraham Accords between Israel and several Arab nations, UAE, Bahrain and Sudan to start. They are rooted in the understanding that we are, at end, a family.
https://www.state.gov/the-abraham-accords/ 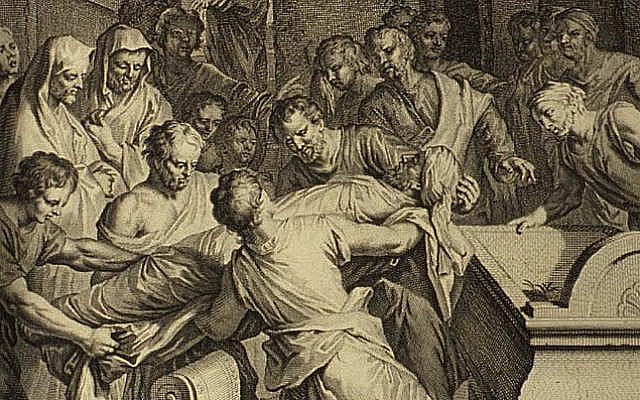 Before Rebecca meets Isaac, she is asked whether she will leave her family. Her permission and assent are required.  She decides whether or not to meet Isaac. Women are often, if not always, empowered in the Torah.

All images are free from copyright restrictions. The painting by Poussin and the image by Hoet are in the public domain.