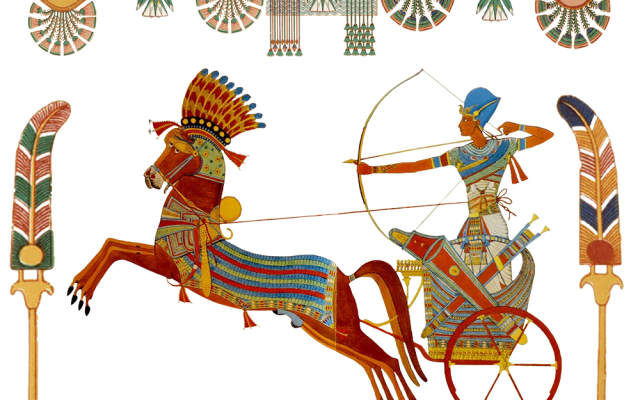 Image by addesia from Pixabay

In Parashat Beshalah, the Israelites are finally freed from slavery in Egypt. But it’s not exactly smooth sailing! No sooner do they reach the edge of the desert, than God tells them to turn back and camp at a particular place facing the Red Sea (or Sea of Reeds). Moshe is told that things are approaching the last act: “I will stiffen Pharaoh’s heart and he will pursue [the Israelites], that I may gain glory through Pharaoh and all his host; and the Egyptians shall know that I am the Eternal.”

And indeed, when the Egyptians wake up to find the Israelites (and presumably a large number of other slaves) gone, they have a change of heart: “What have we done (מה זאת עשינו)!?”

It’s not long before the Israelites also have a change of heart. When they see the Egyptian army closing in on them, they cry out to Moshe: “Was it for want of graves in Egypt that you brought us to die in the wilderness? What have you done to us (מה זאת עשית לנו), bringing us out of Egypt?” The phrase used echoes that used by the Egyptians in the earlier pasuk.

In what must be one of the earliest ever cases of “I told you so!”, the people rail at Moshe: “Is this not the very thing we told you in Egypt, saying, ‘Let us be, and we will serve the Egyptians, for it is better for us to serve the Egyptians than to die in the wilderness’!”

It seems that neither the nation of Egypt nor the house of Israel is ready for the events now unfolding. They are overwhelmed by events out of their control and beyond their experience. The Israelites, having lived in slavery all their lives, were naturally fearful of freedom—and even more fearful of the Egyptians. It makes sense then, that for God’s plan for the nation to play out, the people would need to be rescued against their will.

The Egyptians, meanwhile, have reason to feel even more overwhelmed than the Israelites; they have been caught up in a process in which each ill-concieved decision breeds another calamity, and yet they can find no way out of the cycle. Again and again, God “strengthens the hearts” of the Egyptians—first, so that they will refuse to free the slaves, and now, so that they will pursue them to bring them back. The impression throughout is that no one is really acting from free will.

But how do we reconcile this seeming lack of free will with the Torah’s usual insistence that humans are free to choose?  I think an answer is to be found in the Torah’s depiction of miraculous events.

Anyone who’s seen Cecile B. Demille’s version of the splitting of the Red (or Reed) Sea comes away with an image of an almost cataclysmic event. And yet, the Torah describes a scene that, were we not told that God was bringing it about, we might ascribe to a fortuitous natural event:

Even though the text pictures the waters standing on either side like a wall, we are also told that God performed the miracle via a strong east wind that blew all night. The miracle might easily be ascribed to a natural—if freakish—occurrence.

So too, with the stiffening of the hearts of Pharaoh and the Egyptians, had we not been told that God is “stiffening their hearts”, we would simply see their disastrous decisions as the result of spectacularly bad leadership.

In giving us the “inside scoop” the Torah is teaching us another way of seeing things: the same event can be viewed through more than one lens. We can see it as a natural phenomenon, which of course, it is. Or we can see it “from the inside” as part of a larger plan. Both views are true; they each represent one aspect of the world.

While a psychologist might see God’s “strengthening” of Pharaoah’s heart as a manifestation of confirmation bias, a historian could see the Egyptian policies as a prime example of what historian Barbara Tuchman famously termed “folly”.

Folly, wrote Tuchman, is the pursuit of policy contrary to the self-interest of the constituency or the state involved. In order for a policy to be considered “folly”, it must have been perceived as counter-productive in its own time, while a feasible alternative course of action was clearly available.

Chief among the forces affecting political folly is lust for power…. Government remains the paramount area of folly because it is there that men seek power over others — only to lose it over themselves.” (Barbara Tuchman, The March of Folly)

Interestingly enough, a critical review of The March of Folly pointed out what the reviewer saw as a weakness in Tuchman’s thesis:

Tuchman applies the concept of folly to ‘historical mistakes’ with certain features in common: the policy taken was contrary to self-interest; it was not that of an individual (attributable to the individual’s character), but that of a group; it was not the only policy available; and it was pursued despite forebodings that it was mistaken. The only way to account for such self-destructive policies, in Tuchman’s view, is to label them follies; but that, as she seems unaware, puts them beyond rational explanation. (“The March of Folly by Barbara W. Tuchman”. Kirkus Reviews. Retrieved 2016-05-11.)

Indeed, such things may indeed seem “beyond rational explanation”—in fact they may appear miraculous!