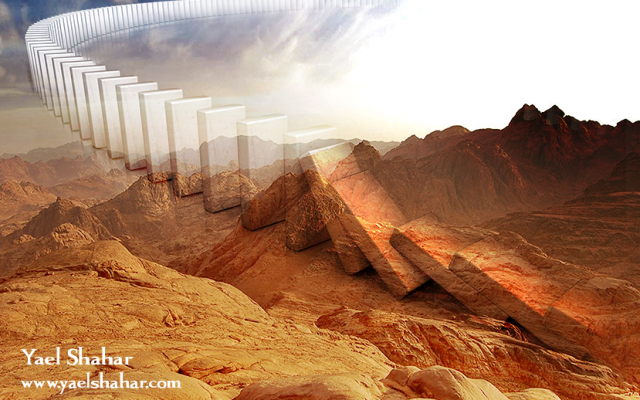 This week’s parashah continues Moshe’s orations to the Israelites in the desert. The setting plays a crucial role in understanding what is going on: it is the eve of their transformation from a group of wandering tribes into a nation. It is no coincidence that this parashah is called “ekev”, literally “because of”. This parashah is about consequences:

The word “ekev” has the same root as akev (heel). The connotation is that of causality, of one thing coming “on the heels” of another, as a natural consequence.

The same word is used further on to spell out the opposite consequence, thus framing the “fine print” of the Covenant:

The Ways of God

Moshe emphasizes again and again, from a variety of different directions, that the new nation will prosper and inherit the Land only if it adheres to “the ways of God”.

And what is the way of God?  The Talmud (Sotah 14a) expounds on the phrase “to walk in his ways” as indicating Imatatio Dei:

This is hinted at when Moshe points out that “God will not be bribed and will not show favor”, rather, just as he champions the cause of the weakest members of society, so must you do the same:

The Arc of History Bends Toward Justice

Justice is not merely an individual or societal issue; it has historical consequences. The events now unfolding on the eve of the Israelites’ ascent to the Land are the fulfillment of the Covenant which God made with Avraham at the Brit bein haBatarim, and renewed with his son and grandson. This is made clear by Moshe’s choice of words:  Avraham was told that through his descendants the nations of the world would be blessed, “because—ekev— he feared and obeyed God in the matter of Akeda:

A generation later, Yitzkhak is told that his descendants would be as numerous as the stars and would be a blessing to the nations, because —ekev—Avraham “kept My charge: My commandments, My laws, and My teachings.”

But the connection goes back even farther. We are told that God chose Avraham because “I know him: he will teach his children to do righteousness and justice—tzedek u’mishpat.” God is in effect saying, I have a stake in the choices of this nation and in its future.

The opposite of tzedek umishpat is embodied in the nation of Amalek. A nation that preys on the weak and vulnerable may have temporary ascendancy, but is destined to collapse of its own corruption in the end. Such a nation will have no historical continuity because it operates against the very principles of national survival.

This, our parashah hints, is exactly what has happened to the once-prosperous nations that the Israelites will, over time, displace. Three times Moshe repeats: “It is not because of your virtue that God is displacing these nations in your favor. Rather it is because of their failings.”  These nations were an evolutionary dead end. God’s love of justice equates to this: that just societies have a future.

The central message of Parashat Ekev has been borne out time and again. In 1853, Theodor Parker, an American minister, used a similar logic to argue for the abolition of slavery:

Look at the facts of the world. You see a continual and progressive triumph of the right. I do not pretend to understand the moral universe, the arc is a long one, my eye reaches but little ways. I cannot calculate the curve and complete the figure by the experience of sight; I can divine it by conscience. But from what I see I am sure it bends towards justice.

The Perils of Success

The danger is that when the Israelites are given the land “on a silver platter” and blessings are showered upon them, they may lose sight of cause and effect:

To cement this lesson in the minds of his hearers, Moshe recounts the history of Israel and its wanderings, showing what led up to the present moment. What is happening now, he tells them, is the long-term result of the promise made to Avraham 400 years earlier. That promise is about to be fulfilled, but don’t expect open miracles—it will happen through the strength that God gives you to build your nation, and the justice with which you administer your affairs.

These are covert miracles; they could easily be mistaken for coincidence.  Thus, Moshe reinforces the connection between historical memory and causation: Remember! Remember your wanderings in the desert and how you were cared for when you could not fend for yourself! Remember how you lost site of the mission and were nearly destroyed because of it. Remember—do not forget!

The strength of Moshe’s vision is shown in the fact it has been preserved in memory down through the ages, and has shaped memory itself to be the tool of its propagation, such that the encounter at Sinai is renewed again in every generation.

Moshe’s listeners may not have fully understood what he was trying to tell them. They did not have the perspective of the intervening centuries to see the truth of his vision.

[1] This is not the first time someone has diagnosed success as one of the pitfalls of civilization, and a primary reason for the decline of a given culture. David P. Goldman makes a similar case in How Civilizations Die.