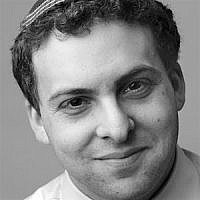 The Blogs
Chai Posner
Apply for a Blog
Advertisement
Please note that the posts on The Blogs are contributed by third parties. The opinions, facts and any media content in them are presented solely by the authors, and neither The Times of Israel nor its partners assume any responsibility for them. Please contact us in case of abuse. In case of abuse,
Report this post.

They’re calling it the punch heard ‘round the world. In a baseball game between the Texas Rangers and Toronto Blue Jays, Texas second baseman Rougned Odor punched Toronto’s Jose Bautista square in the jaw when he took exception to Bautista’s dirty slide into second base. The slide came after Bautista had been hit by a pitch, likely in retaliation for his showy bat flip after hitting a go ahead home run in Game 5 of last year’s American League Divisional Series. While the punch and the ensuing brawl were certainly exciting and entertaining to watch, when we step back for a moment it is easy to see how completely immature and juvenile the whole situation is.   That being said, there is also an important life lesson for us.  The question is, are you looking for a fight, or are you looking for a win? Are you a brawler or a baller? There’s a major difference between the two.  A difference which can be seen clearly when we take a close look at another brawl; this one found in our Parasha this week.

At the very end of Parashat Emor we read about the intriguing case of the mekallel, the blasphemer.  In the midst of an altercation, one man cursed the other, employing the Holy Name of God to do so.  Since this had never happened before Moshe wasn’t sure exactly how to proceed, and asked God for instruction (kind of like waiting for MLB to hand out suspensions!).  God replied to Moshe that the man should be put to death.  Many commentaries point out that this last narrative seems to be completely out of place with the rest of the Parasha. The Parasha begins with a list of specific laws addressed to the Kohanim (priests) regarding the level of holiness and purity that they must uphold.  This includes some laws about contact with a dead body, mourning, marriage, which Kohanim are fit to perform the service in the Temple, and details of the rituals involved in offering Korbanot (sacrifices).  The discussion about sacrifices leads into a section on the festivals of the year.  After the section on the festivals, we move to laws about the Menorah and showbread, two additional responsibilities of the Kohanim. And then we read about a fight!  Where does the fight come in?

Yitzchak Karo (cited by Nechama Leibowitz) explains that everything in the Parasha – the Kohanim, the sacrifices, the Menorah and the showbread – all come to sanctify God. “Comes the blasphemer and repudiates all – the offerer, the sacrifice, and the very existence of God.” The blasphemer stands in stark contrast to the rest of the Parasha.  The Parasha is about bringing blessing, bringing sanctity, bringing holiness; the blasphemer chooses the opposite.  He chooses to bring curse, profanity, and desecration.

The blasphemer is a brawler.  He is looking for a fight.  If you’re looking for a fight, you’ll find one.  There is always something to get upset about, there is always someone doing something that bothers us.  We can choose to pounce on those situations.  We can walk up to others and punch them in the face.  We can curse them.  We can be sources of negativity, complaints, and fights.  Or we can be ballers.  You know what a baller does?  He/she steps into the batter’s box at the next opportunity and gets a hit. A baller looks to win the game.  A baller is a source of positivity, benevolence and peace. A brawler, like the blasphemer, comes to counter all that is good.  A baller looks to overcome the bad with good.  Are you a brawler or a baller?

About the Author
Rabbi Chai Posner is Associate Rabbi of Beth Tfiloh Congregation in Baltimore Maryland, where he has served since receiving his Semicha from Yeshivat Chovevei Torah in 2010.
Comments