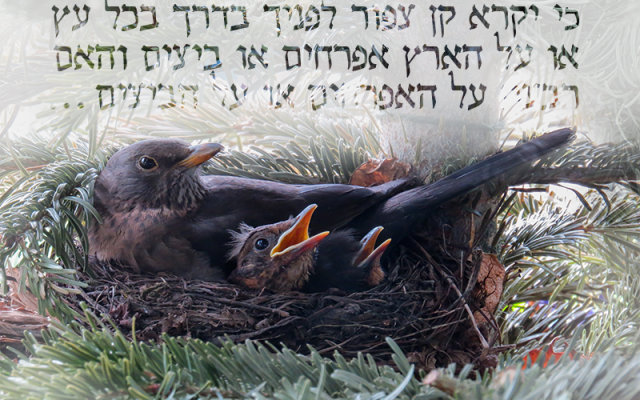 The “law of the bird’s nest” comes at the end of a long list of other mitzvot, almost all of which are situational: if such-and-such happens, then do this. This is also known as casuistic law, or case law—laws which are set out on a case-by-case basis, rather than as broad principles.

And yet, these cases and their prescribed behaviors are never far from the teaching of general principles. The totality of the laws illustrates the values and principles on which our society should be based. How do we know this? Because the Torah says as much straight out. The list of mitzvot in Ki Titzei culminates in the far-reaching statement: “So that it will be well with you and your days will be long (לְמַעַן יִיטַב לָךְ וְהַאֲרַכְתָּ יָמִים).

A cursory glance at the list of mitzvot in our parasha reveals a thread of pragmatism running through them all: they are all mitzvot that mitigate the impact of common societal ills, such as atrocities in war, honor killings, and prolonged poverty.1 The outcome of these laws is simple cause-and-effect: the concrete benefits of a well-run society where justice is valued, and greed and vengeance are held in check by law.

Coming as it does as the culmination of a whole set of laws, the “law of the bird’s nest” has come to be particularly associated with long life. One could argue that any mitzva that ended the series would be so associated, when really, it’s the observance of the mitzvot as a whole that guarantees long life.

Beyond the Tragedy of the Commons

But what sort of long life? Perhaps the fact that the bird’s nest—seemingly the most trivial in the whole series—is the one associated with long life is itself an indication of what “long life” means in this context. After all, it would be easy to say, “It’s only one bird! What does it matter if I take the mother bird along with her chicks. So long as not everyone does likewise, there will be plenty of birds to go around!”

This is what’s known as “The Tragedy of the commons,” the notion that I can graze my flock on common land without fear of overgrazing, so long as everyone else refrains from doing likewise. The “tragedy” here is that the individual’s self-interest runs contrary to the good of society as a whole.

The problem is that most of the actions that fall into the category of the tragedy of the commons fall below the radar of the law; they are not crimes per se. And yet, as Avraham Yehoshua Heschel pointed out, societies stand or fall upon the actions of individuals:

It is the prophets who teach us that the problem of living does not arise with the question of how to take care of the rascals, of how to prevent delinquency or hideous crimes. The problem of living begins with the realization of how we all blunder in dealing with our fellow men. The silent atrocities, the secret scandals, which no law can prevent, are the true seat of moral infection. (“Religion in a Free Society,” The Insecurity of Freedom, p. 11-12)

The seemingly trivial act of restraining one’s greed and letting a mother bird go free is thus tied to a greater good: a people that conserves its resources and refrains from decimating its environment is vouchsafed a long life on its land.

This is not so much a “reward” as a natural consequence of the act of conservation: a society that does not destroy two generations of food animals at once is one that is willing to forego short-term gain for the greater good of long-term benefits.2 Greed is kept in check by rules internalized in each generation. If this applies even to “windfall” opportunities such as a bird’s nest found along the way, how much more should it apply to more critical resources!

Honoring the past as guarantor of the future

A similar list of mitzvot in Sh’mot (Exodus) also ends with the promise of long life:

Honor your father and your mother, so that you may live long in the land the Eternal your God is giving you.

As with the bird’s nest, the length of days associated with this mitzva would appear to pertain to the society as a whole, rather than the individual: a society that respects its elders is one in which the past is a guide to the future, where the wisdom of earlier generations is passed on, generation to generation. It is a society whose culture will survive into an unknown future.

Only cultures that are connected to their past—that honor and cherish their pasts and give this honor concrete form by cherishing the corporeal representatives of the past—only such societies have any stake in the future.

Both conditions—honoring parents and safeguarding the environment—are necessary for national survival beyond a few generations. Honoring parents is a necessary condition for a long cultural life, conservation of resources for a long physical life. It’s just that the long life must be seen not as individual life but as societal life—the life of a people.

Notes:
1. The notion that the Torah comes to “regulate” the natural response is a very fruitful idea, in particular when dealing with issues where our moral sense recoils. For example, the Sotah (the woman suspected by her husband of adultery), the Yaffat Toar (the beautiful woman taken in battle), the Ben Sorer More (the rebellious son)… In all of these cases, the Torah seems to be saying: “You want revenge? You want to slake your lust? Your need to control? Sure, but not so fast! There are procedures that must be satisfied first!” And in the course of fulfilling the required bureaucratic requirements, tempers cool, lust subsides, sanity prevails.↩

2. Nachmanides on Deuteronomy (22:6): “Scripture will not permit a destructive act that will cause the extinction of a species even though it has permitted the ritual slaughtering of that species. And he who kills mother and children in one day, or takes them while they are free to fly away, is considered as if he destroys the species.” ↩