The Blogs
Yael Ridberg
Apply for a Blog
Please note that the posts on The Blogs are contributed by third parties. The opinions, facts and any media content in them are presented solely by the authors, and neither The Times of Israel nor its partners assume any responsibility for them. Please contact us in case of abuse. In case of abuse,
Report this post. 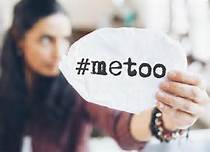 In the past few weeks as the stories of sexual harassment and abuse at the hands of Harvey Weinstein have come to light, the prevalence of sexual exploitation and harassment in our society has entered the national spotlight. #MeToo stories are real, and they are being told by women in nearly every field and walk of life. The presumption on the part of men that their position, their stature, and self importance is such that they are entitled to take what they want from women is clear. The power of #MeToo, though, is that it has taken something that women have long kept quiet about and virally shattered the silence of isolation.

The silence is not new, and we have only to look at this week’s Torah portion of Lech Lecha to see how silence is perceived as consent, thereby setting up the ancient system of women as notions of property, to be dealt with as any man likes.  As Abraham and Sarah head to Egypt, Abraham is concerned about his safety (not their), and proposes to Sarah that because she is beautiful, she indicate that she is Abraham’s sister “that it may go well with me for your sake, and that I may live on account of you” (Gen. 12:13).

The Egyptians cannot help but notice Sarah’s beauty, and she is taken to Pharaoh, who presumably is intimate with her.  The great commentator Rashi explains that Abraham was hoping that the Egyptians would not only spare his life, but that they would shower him with gifts. Which by the way, they do: with sheep, oxen, asses, male and female slaves, and camels, all this while Pharaoh was assaulting Sarah in silence. It isn’t too far fetched to read these riches as a payment for Sarah’s “services,” even while traditional commentators see her behavior as an act of courage.

We don’t know what happened in Pharaoh’s bedchamber, not the least of which is because the narrative does not record Sarah’s thoughts, words, or actions during or after her encounter with Pharaoh. Readers of the text might dismiss her silence since the Torah is replete with moments where dialogue is missing, and we have to read between the lines to interpret the text. But I have always identified her silence with discomfort, insecurity, and fear that something worse could happen if she didn’t comply. Was she taken against her will? Did she say no to Pharaoh?

Remarkably, this motif will repeat itself two more times in Genesis, once again with Sarah, in Genesis 20, and in a nod to the teaching of the rabbis, “ma’aseh avot siman l’vanim” — the actions of the fathers are signs for the sons — between Isaac and Rebecca, Genesis 26. Each of these scenes occurs directly after God has made some pledge of prosperity to the patriarch, which only serves to underscore the power dynamics between men and their wives in the Torah, and the larger point that sexual assault isn’t ever really about sex, it’s about power. The ease of the presumption and perpetuation of behavior, in the face of Sarah’s (and Rebecca’s) silence, which masquerades as consent.

Consent refers to a practice of seeking a person’s permission before proceeding with a particular behavior or course of action. We might all agree that a person has the right to choose what she or he experiences or doesn’t, but in the context of sexual harassment and assault, as we have heard over and over again in the now more than 65 accounts against Weinstein, women often find themselves stunned into silence by the behavior of a man they know, admire, report to, work for, or respect. There is an uncomfortable tension here because many men don’t seem to take the need for consent seriously, and women who are victimized by this behavior often question whether they had a right to say no.

There is much work to be done in confronting a climate of serial sexual predation that is as old as the Bible itself. It is important for women to be able to raise our voices out of the silence, but we also need men to stop belittling, undermining, harassing, assaulting, and abusing women, and they must condemn such behavior when they see it. Let us break the cycle of such behavior so that indeed, each of us might be the blessing that the covenantal promise of the portion anticipates.

About the Author
Rabbi Yael B. Ridberg serves as the spiritual leader of Congregation Dor Hadash in San Diego, California. In addition to her congregational responsibilities, Rabbi Ridberg serves on the Board of The San Diego Jewish Academy. She lives in La Jolla with her husband and four daughters.
Related Topics
Related Posts
Comments
Advertisement