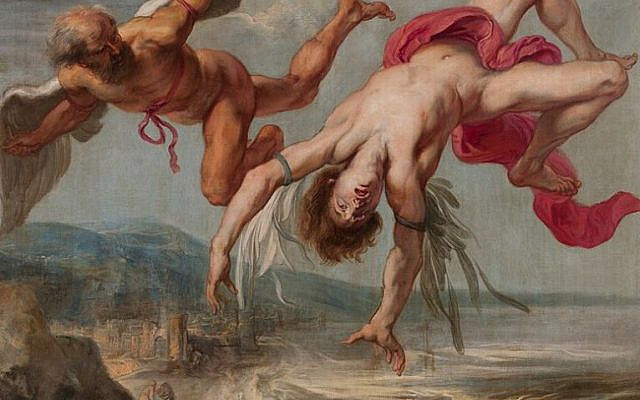 Many people know the Greek myth of Daedalus and his son Icarus.  His father, a celebrated carpenter and inventor, was imprisoned by the King Minos of Crete in a tower with his son Icarus.  To plan an escape, Daedalus fashioned wings that could soar unto the heavens.  He gathered feathers and bound them together with wax, giving them to his son.  He warned his son not to fly to0 low to the water, as the humidity would weigh the wings down and he would crash into the water.  Conversely, he instructed his son that flying too high to the sun would cause the wax to melt.  Icarus, soaring through the air, became overwhelmed by the experience, rising higher and higher.  As he touched the sun, his wings burned up and Icarus crashed into the sea and drowned.  The myth is meant to be a lesson to teach that human creativity, which is like the gods, needs to be coupled with a sense of propriety and limits.  The immature pride, the hubris, of Icarus was the cause of his own death.

While there is an ocean of difference between pagan Greek myth and our Torah, often cross-cultural comparisons can be enlightening. Interestingly, the very hubris that motivated Icarus’s downfall is reflected in a different way in this week’s parashah in a story, which has troubled many.  In our parashah, we learn of the untimely and tragic death of two of Aaron’s sons- Nadav and Avihu.  On the eighth day of the dedication of the Tabernacle, they experience a Divine flame descend from heaven and consume the sacrifices on the altar; the Divine presence symbolically occupies the Tabernacle.  This must have been a moment unlike any they had ever experienced. Overwhelmed and in a state of religious ecstasy, Nadav and Avihu give an esh zarah, a strange offering of fire not commanded by God.  Like Icarus who wanted to approach the sun, the actions of the two priests seemed generally motivated by an intense desire to connect to the Divine.  Yet, the Torah tells us that instead of the sacrifice being accepted, they become the sacrifice itself, being consumed by the heavenly flame.

Both the Greek and Biblical narrative are meant for us to consider the notion of self-knowledge and human limitation.  We need to be aware of the difference between our finite existence and the Divine existence, and to respect boundaries.  Great crimes are committed when we forget that the other is truly the other, whether it be in a relationship between two people, or between mortals and the Divine.

However, I would like to focus on a different aspect of the story, something, which I believe, is a challenge for us.  Whether it is the Bible, or the Greek myth, for the story to be powerful we must not only focus on the limits of humanity, but the Divinity of humanity as well.  Indeed, the names of our priests, whose names curiously mean “to give tribute” and “he is my father”, point to the fact that they feel the Divinity not only beyond themselves, but within themselves, and they want to give homage to that.   Humanity is made from the dust of the earth, but they are also in God’s image.  Like one chord of an instrument that resonates with the vibration of another chord, the human being is a spiritual creature in a physical body.  We too can respond to the spiritual resonances all around us- if we attune ourselves.

And here is the problem in our modern society.  In both stories individuals are tempted not with wealth, or power, and money but with spiritual connection and transcendence.  These resonances are so strong that they cause the protagonist to lose their own lives in the process.

In our modern society becoming increasingly secular and filled with the cacophony of deafening distractions, I do not think the temptations of Nadav and Avihu are real concerns.  We do not need to fear being burnt by the sun like Icarus.  Many simply cannot relate to these spiritual and religious passions, and it is for this reason that the failings of Nadav and Avihu seem so strange.  The fire offering, they gave is indeed an esh zarah, a strange fire- not in the sense that it was an offering not commanded by God, but that they felt compelled to do this in the first place.

In the words of Wordsworth, “The World is too much with us.”   When we speak about success in our society, it generally relates to the notion of material success, as opposed to a life well lived.  Our education system is often perceived as utilitarian as opposed to a path towards wisdom.  We are focused more on achieving marketable skills than asking compelling questions about the world in which we live, questions which can propel us into a lifelong search for meaning.  For our generation, the danger is not getting too close to the sun, but too close to the water in such a way that our spiritual wings are burdened, and we cannot fly at all.

Rabbi Amnon Bazak has noticed an interesting phenomenon in the book of Leviticus.  In the Torah, sacrifices have been referred to using many terms- zevah (offerings), todah (thanksgiving offering), or olah (burnt offerings).  However, the most common word in Leviticus for sacrifice, korban, is surprisingly missing.  Why?

The word korban does not really mean sacrifice, but comes from the root LeHakriv, which always in the Torah means to come close.  This is not the place to discuss the meaning, theories and various symbolisms of sacrifices, a topic that is hard for many modern individuals to understand; furthermore, different sacrifices clearly have different functions.  Yet, at the root of every private sacrifice is the concept that the person wants to come before God and be in relationship.   Thus, to sacrifice, lehakriv, really means an act of coming close.   In the Torah sacrifices are not mindless ritualistic acts of placating or even bribing God but are seen as an expression of an individual that with his whole being wants to come close to God. [1]  The prophets repeatedly warn the Jewish people that God does not require animals per se. “For I demand kindness and not offerings, and the knowing of God over burnt offerings’ (Hosea 6:6).  The point is not so much that sacrifices are meaningless, but rather that they are an expression of a person on a spiritual quest who wants to be in relationship with God.

Perhaps this is the reason that for some voluntary burnt offerings, the Torah permits the individual not only to sacrifice animals, but if one is poor turtledoves.[2]  Anyone regardless of his or her level of wealth who has an intention to approach God should be able to do so.  In modern parlance, synagogue should not only be for people who can pay full fair but should reflect the economic realities of the entire community.  At the same time, giving something of real meaning is an expression of value that one brings to the relationship, in this case their relationship to the community and to their spiritual life.

It may be true that modern Jews have difficulty understanding the technicalities of sacrifice, but much more problematic is the failure to understand the psychology that motivated people who wanted to bring a sacrifice in the first place.  The mind of the person who wanted to bring a sacrifice felt the presence of God in the camp and in his life, and he needed to respond somehow.  It was this mindset that led Nadav and Avihu to lose themselves, so blinded by their love to connect.

Our Jewish community is rich and multifaceted, and we know that there are many gateways to Jewish identity, many avenues. Yet, I fear very much that we will lose the next generation if we do not instill within them a spiritual passion to transcend.

Many years ago, the former host of NBCs Meet the Press David Gregory addressed the Miami Jewish community at an event about his journey of faith.  Gregory, the child of intermarried parents and himself married to someone non-Jewish, began in adulthood to explore his faith and began to learn Torah more seriously.  I remember Gregory saying something that for some in the crowd was very uncomfortable to hear, yet nonetheless I believe contained a lot of truth.  He said that ultimately a Jewish identity which was to survive in a multicultural America needed depth, and that meant a serious engagement with Jewish learning and Jewish texts.  National Jewish pride in the State of Israel and standing up to anti-Semitism was not a substitute for personal spiritual commitments.   One needed to chart a Jewish path leading towards a higher meaning and understanding of self.   For someone whose family life and history reflects the American experience, I think his words were particularly significant, for these were not the words of a rabbi looking down from atop the pulpit, but the words of one who some might consider somewhat assimilated, someone not so different from many in our Jewish world.

Our generation is not the generation that should fear the sin of Nadav and Avihu.  Quite the contrary.  Our challenge is to instill within our people the passion to embark upon spiritual journeys, and the challenge does not begin with engaging others.  It begins with engaging ourselves.  Nadav and Avihu brought a strange fire not commanded by God, and this was their failing.  Yet, that was their greatness as well, as they, both understood more than any present that they stood before God and wanted to bring something of themselves.

Can we feel that same sentiment and can we respond? This is the challenge of our time.

[2] Not all sacrifices allow this ‘sliding scale’.  The theories are beyond the scope of this essay.