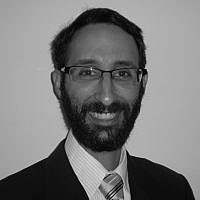 The Blogs
Uri Allen
Apply for a Blog
Please note that the posts on The Blogs are contributed by third parties. The opinions, facts and any media content in them are presented solely by the authors, and neither The Times of Israel nor its partners assume any responsibility for them. Please contact us in case of abuse. In case of abuse,
Report this post.

This sermon was delivered during Shabbat morning services.

Monday was a hard day.

As many of you know I had taken a few days at the beginning of the week to go and study at Yeshivat Hadar, a place of deep Torah and even deeper soul, that I have connected to over the years. My goal was simple – to immerse myself in the world of the beit midrash, to tap back into the joy and fulfillment I receive from Talmud Torah Lishmah – Torah study for it’s own sake. As I remarked to Sari over the phone Sunday night after an inspiring class taught by Rabbi Shai Held – I was in my happy place.

The next morning however, as we were sitting down to prepare material for Talmud class – my phone started buzzing with text messages from Sari.

Our oldest son is in kindergarten there. Needless to say we were very worried.

We spoke and texted several times over the next couple of hours. Rabbi Shawn was with me at this conference as well and he too has a son at Perelman. We diligently monitored the phones as more information came out about what was going on and what the school was doing to keep our children safe. Learning was extremely difficult.

The school communicated with us beautifully. Throughout the morning phone calls and emails came to us providing information, instructions, reassurance and support. As a parent I could not have been happier with how the school handled things.

During the lunch break, while speaking with an old friend and colleague, I contemplated returning home. Only the day before, the Mt. Carmel Cemetery was desecrated and plans were beginning to come together about the rally that took place this past Thursday on Independence Mall. Could I be of any help or service if I came back? Would it make a difference? Mostly, I wanted to hug Doron and Aderet and Yedidyah and Sari as hard as I could – possibly never letting go.

In the end, I decided to stay and continue learning despite the fact that my mind remained divided. I was inspired by what another participant in these days of study remarked to me – the way to combat antisemitism is not with anti-antisemitism. It is with pro-semitism. What he was saying to me is that the people behind these acts of cemetery desecration, of calling in threats to Jewish institutions, of using Nazi imagery and propaganda against us – what they really want is for us to be afraid of being Jewish. One way, a very powerful way to combat that, is to proudly and without apology continue to live and behave as Jews do.

This called to my mind a famous story of Rabbi Akiva who was thrown into Roman prison for disobeying the decree prohibiting public Torah study. As the Romans tortured him, flaying his skin with sharp iron combs, he began to recite the Shema.

His students, witnessing the suffering of their beloved teacher, could not believe their ears. Is this the moment to say the Shema? Really? Our teacher – this far, they cried out! Yes he replied. As the Shema teaches, we should love God with all our souls…even if it takes your soul

I am no Rabbi Akiva, far from it. But it felt like an act of defiance to remain and continue learning.

These anti-Semitic incidents, despite becoming all too familiar and regular around the country and the world, must not lead us to feel that this is normal. This is not normal.

I don’t know what these people want ultimately. But what is clear is that they want us to be afraid, to see the world as chaotic and unpredictable to cause paralysis and inaction.

Our parsha this week speaks to this very issue though in a subtle way.

The rabbinic tradition, in reading the architectural plans for the mishkan, the portable sanctuary in the wilderness, makes direct connections to the creation of the world at the very beginning of our Torah. This is further supported by the juxtaposition of Shabbat and Mishkan that we will find in the coming weeks.

What is the rabbinic view of creation? The Rabbinic view of the creation of the world is a continuation of the biblical view. It is not a vision of creation ex nihilo – having the world appear out of thin air as it were. It is the opposite in fact. God takes a chaotic primordial environment – tohu vavohu – and gives it order thereby enabling it to be a place fit for life, for love and for holiness.

In that light, our Tabernacle is a microcosm of the world. Out of items taken from the Egyptians, after our experience of slavery under Pharaoh, whose name literally means one who makes chaos – we build a place, a structure, where order can triumph over the forces of disorder. We build a place where holiness can dwell.

It is not the activity that we do there that makes it a holy place. It is the construction itself that facilitates it being a place worthy of sanctified actions.

In perpetrating acts of disruption that serve to heighten the sense of chaos – those who act out from places of anti-Semitism, homophobia, islamophobia, anti-immigrant sentiment and any other kind of discrimination on the basis of difference, do so in direct opposition to the theology and the God of the Bible.

Friends, this has been a hard week filled with a range of emotions and reactions. On this Shabbat of building holy space let us be moved to action from the models of Rabbi Akiva and from the mishkan. Let us double down on our learning , our prayer, our community building and our performance of mitzvoth. Let us resolve to defy those who would scare us into abandoning Jewish practice and let us manifest our generous spirits creating a dwelling place fit for holy work and the presence of the Holy One of Blessing

About the Author
Uri Allen is the Associate Rabbi at Temple Beth Sholom in Roslyn, NY where he lives with his wife Sari and three children Doron, Aderet and Yedidyah. He is also a Rabbis Without Borders Fellow and a part of the fourth cohort of Clergy Leadership Incubator.
Comments