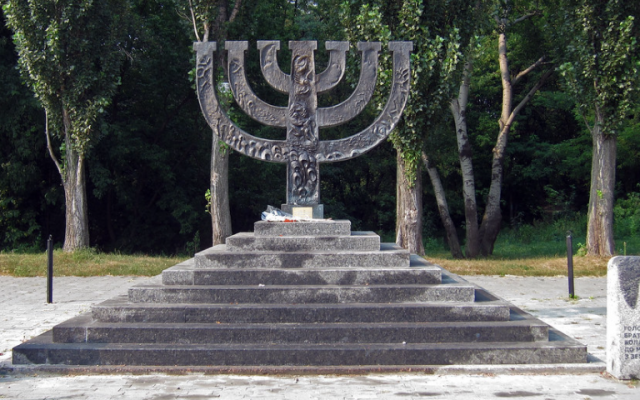 There is a strange contradiction among many of those who would question the heinous crimes of the Holocaust.  While denying these events ever happened or are grossly exaggerated, they simultaneously fuel the very hatred which caused the Holocaust in the first place.  These anti-Semites claim that the entire Holocaust is a fabrication, made up by Jewish (or Zionist) establishment to further their misanthropic ‘Jewish’ interests.  Beyond the violence these people do toward history, the past, and truth, consider the impact on our survivors today.  Not only do they need to carry daily the scars of the past, but this very denial implicitly questions their very right to grieve for their family and friends.  It is almost like these crimes have drowned in the great river of time.  Almost like they never happened.

This week’s parasha opens with the first of the ten plagues- blood.  Aaron throws his staff into the Nile, transforming the Nile into blood.  Was there a specific message with the introduction of the plague of blood?

Like modern day Pharaohs, the Pharaoh of the Exodus was the mastermind of a nefarious program of persecution, slavery, and even genocide.  This new chapter in Egyptian history begins in last week’s parasha with a new Pharaoh that the Torah says, ‘did not know Joseph’.  How could he not know Joseph, the savior of all Egypt!  Impossible.  Everyone knew and admired Joseph and his family.[1]  Rashi notes ‘he [Pharaoh] made himself as if he did not know Joseph’.  Pharaoh understood you cannot oppress and enslave someone you know, much more convince your subjects to turn on their fellow countryman.  ‘Let us be shrewd’, he tells his inner circle of advisors.  To enslave and oppress the Jewish people, they will first need to engage in ‘revisionist history’ to desensitize fellow Egyptians to achieve his ultimate plan of persecution, enslavement, and even genocide.  In other words, each Egyptian will also need to make themselves ‘as if they did not know Joseph’.

How did he do it? The 13th century commentary Nachmanides explains a plan chillingly reminiscent of the 1930s.  He begins with a propaganda campaign: the Israelites very success in Egypt is a danger.  They are in essence a fifth column who will align themselves with their enemies and eventually dispossess them.  They are multiplying and are people who ‘swarm’ and ‘fill the land’; these are words used by insects, not human beings.[2]  He then enacts discriminatory taxes upon the Jewish people- a ‘foreign tax’- even though they had been native to Egypt for over two hundred years.  Desensitizing the people even further to their suffering, he is able now to tax their bodies as well, having them do the lowliest of labor, making bricks.   At this point they are no longer seen as fellow human beings, but economic commodities.

By this point, the people have certainly forgotten Joseph, and Pharaoh is ready to destroy any memory of them ever being a people, through eliminating the leadership of all males.  However, even now to command the people to kill them with their own hands is distasteful, so the dirty job is given to the Hebrew midwives, ‘a special unit’ commanded to kill the male babies on the birthing stool.  This way there would be plausible deniability, as Pharaoh could claim the children died in childbirth.  Bravely, the Hebrew midwives are a voice of conscious, and refuse to obey Pharaoh’s command.  However, by this point Pharaoh has created such an environment of discrimination, dehumanization, and violence against them, that he is able to declare to his people, “Throw the males into the Nile River!”  Terror moves to the streets with marauding mobs, and Jews hide their children.  The terror becomes so extreme that Moses’ mother Yocheved decides that deserting her child to float down the Nile River in a basket is her best hope to protect him.  Indeed, by the end of Pharaoh’s campaign they did not remember Joseph.  Revisionist history was achieved.  Pharaoh’s program begins with propaganda and disinformation and ends with Egyptians drowning Israelites in the Nile.  Pharaoh is a version of our modern-day Holocaust deniers.

Rabbi David Fohrman notes that the command to ‘cast them into the Nile’ is part of Pharaoh’s plan, for the Jews are swallowed into the depths of the Nile without a trace.  It was as if their suffering and death never occurred.[3]  One thinks of today’s Holocaust survivor who hears the voices of those claim that the Holocaust is a hoax.  Like the Nile, his family one day disappeared into the crematoria at Auschwitz without a resting place.  It is almost as if they never existed at all.

Many years ago I went with a delegation of rabbis to Kiev, where we did a memorial service at Babi Yar, a place where thousands were executed by Nazis and thrown into ditches.  Today there is a small monument remembering this horrific event, but the ravine and the area was wooded with paths, and people were out jogging their dogs.  It felt to me almost as if these horrific events did not occur, submerged in a river in time.

The first plague of the Nile turning to blood is a direct message to Pharaoh.  Aaron takes the rod of justice and casts it towards the peaceful Nile, which conceals the thousands of victims in Pharaoh’s murderous campaign.  The blood of these drowned victims float to the top so everyone in Egypt will see the heinous crimes they have committed.  God is in essence telling Pharaoh and Egypt that they cannot cover up their crimes.  They will be brought to justice. These events occurred and their society is as bloody as the Nile.  Just like the blood of Abel which ‘screams from the ground’, God does see the blood of the victims in that vast river.  In this first plague, God symbolically proclaims to the entire ancient world, “You, Pharaoh, are a murderer.  While you believed you would be able to cover up the sins and they would be forgotten, I will remember.  Truth will prevail. ‘

We too must speak loud and clearly when anti-Semitism and every form of hatred -including racism- appears.  We need to stand up for ourselves as well as others who are singled out based on ethnicity, race, religion, or sexual identity.  We cannot pretend that recent events are not alarming, that this year’s insurrection in the U.S. Capitol was a ‘walk in the park’, that there are not people and groups who claim they are being replaced by ‘non-Americans’, and that the Jews are behind this.  These voices are no longer fringe either, but thanks to mass media they have entered parts of the mainstream.  These voices sound exactly like the propaganda program of Pharaoh, where the Jews are powerful and will eventually ‘replace us.’  Even after two hundred years, parts of our country seem unable or unwilling to truly grapple with the darker parts of our history.  Moreover, some tend to idealize some imagined past, a simpler time, when people knew their place.

We cannot remain silent.  Without a serious reckoning over racial and religious hatred in this country, we are bound to revisit these very dynamics, and in the end, we will suffer because of it.  We need to cast the figurative staff into our own Nile if we are to redeem this country from its baser instincts.  We need to speak loudly and clearly for the truth; people are prone to believe conspiracies and it is naïve to believe people will be able to disentangle truth from disinformation.  The ancient Egyptians did not, and it took ten plagues until they were able to clearly see the injustice they were committing.

The seeds of devastation in Egypt were planted against us over time and allowed to fester.  Today, we too must speak truth to power.

[1] Look at the concluding chapters of Genesis.  The deaths of both Jacob and Joseph are accompanied with public and national periods of mourning.

[2] Exodus 1:7. The Torah uses these dehumanizing terms to talk about the fruitfulness of the children of Israel as the Torah is describing the experience from the point of the Egyptians.

[3] See his lecture series on Shmot, Passover: The Great Miracles of the Exodus”, on his Website Aleph Beta