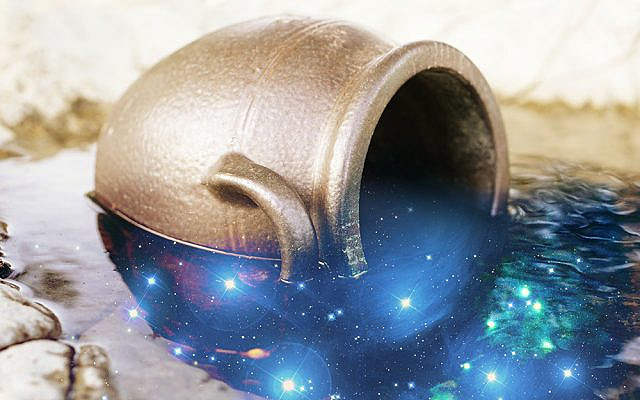 Image by Yael Shahar, based on a Pixabay image by jhenning.

In this week’s parasha, Yaakov flees from his home after stealing his father’s blessing that was meant for his older brother, Esav. His destination is Haran, where his mother’s family lives. In one of the iconic scenes in the Torah, Yaakov meets the daughter of his mother’s brother at the well, and falls in love with her.

This is not the first time that one of our patriarchs finds love at a well. Notably, it was at a well in Haran that Avraham’s servant looked for a wife for Yitzhak. Moshe too will meet his future wife at a well when he flees from Egypt. What is it about wells that makes them the vehicle for matchmaking?

Meeting and greeting at the watering hole

The obvious explanation is that the village well is the community’s vital center—the place where people meet and mingle on a daily basis. It would be the obvious place for men to meet single women (the main “water drawers” of the family). Really the question isn’t why wells play so prominent a role in matchmaking, but why the Torah bothers to tell us something so obvious! Of course our heroes meet their spouses at the well. Why even include that detail?

I think there are a couple of reasons.

To begin with, the well is also a closely guarded communal resource, a hedge against scarcity. It is the place to test a community’s behavior toward the stranger or the weaker members of society. Later we will read of how Moshe meets the daughters of Reuel at the community well. Here too, the Torah highlights how people act at the well as a way of showing the nature of the society. The local male shepherds bully the female shepherdesses, preventing them access to the well. Moshe acts on behalf of the weaker members of society, the young shepherdesses. This earns him a place in the household of Reuel, and eventually, the hand of Tzipora, one of Reuel’s daughters.1

And indeed, each of the stories in the Torah of a meeting at a well hinge on exactly this point. Avraham’s servant arrives at the communal well in Haran at sunset. He is a stranger leading ten laden camels after a long journey. We can assume, based on common practice in the Middle East to this day, that the evening hours are the time when the young unmarried women come to the well to draw water for their families. Avraham’s servant, as a male and as a stranger, has no access to the water at this time. Thus, his test is one designed to single out a woman of uncommon kindness toward the stranger.

The tragedy of the commons

The well that Ya’akov comes upon is also in Haran, but the circumstances are different. The well is in a field, and is covered by a large stone. Inquiring of the shepherds as to why they are gathered around the well, rather than pasturing their flocks, they inform him of the local custom: All the flocks must be gathered together before the stone is rolled away from the mouth of the well.

Is this because of the weight of the stone? Despite appearances, the answer seems to be more complicated. The stone is there in order to prevent “the tragedy of the commons”, whereby an individual or a group takes advantage of free access to a communal resource. Here the stone serves as a “lock” on the well; only when all the shepherds are present with their flocks is the stone rolled away and the well opened. In this way, they can ensure that no one takes more than his or her share.

As a sign of what is to come, it is an ominous warning, and it might have told Yaakov that he was in a place where trust was in short supply. What was his reaction? Upon seeing Rahel and his uncle’s flock, he straightaway rolled away the stone from the mouth of the well and watered the flock. The key phrases are repeated here “his mother’s brother”. Yaakov is now in the territory of his mother’s brother, and the rules are different from those back home.

Yaakov’s action in rolling away the stone is usually seen as an act of physical strength: one look at Rahel and he was given the strength of all the shepherds combined so that he could roll away the stone and water her flock.

But what if the act is not one of physical strength bur rather of cultural hutzpah? Flouting the local custom of waiting until everyone is present, Yaakov unlocks the well and waters his uncle’s flock out of favoritism toward Rahel. He has come to the end of a long journey, and has met the maiden who will be his future wife. He is overcome with emotion and impulse takes over.

But was he right to do so? All along, Yaakov’s troubles have been due to his overturning the social order. His “purchase” of the birthright, his stealing of his older brother’s blessing… and soon his attempt to marry the younger sister before the elder… All of it entails complications that would not have ensued had he gone along with the way things are normally done. His action at the well is yet another “socially unacceptable” overturning of the social order.

It would appear that, as with Rivka’s fateful decision to put forth her younger son over her elder as heir to the patriarchal tradition, this scene at the well is included for a reason. Among other things, we can see it as part of the trend of Avraham’s family to bend—or break—the rules. But Yaakov’s favoritism toward Rahel is a foreshadowing of things to come. We will later see how favoritism toward one wife over the other, and toward one son over the others threatens to tear Yaakov’s family apart, essentially ending the Jewish “experiment” before it has even begun. This theme of favoritism, and its consequences, will carry us all the way up to the enslavement of the Israelites in Egypt.

It would seem that meetings at the communal well are important, not because they are unusual, but because they are a microcosm of society—a place where interactions between people are showcased against the need to share communal resources. This shared need brings out the best—or the worst—in people. One has only to consider the behavior of shoppers at so-called “Black Friday” sales to see the continued relevance of the well as a test of communal values.

“On a first date,” goes a popular bit of wisdom, “the thing to look for isn’t your date’s looks, but how he or she treats the waiter!”

1. Moshe’s case may be highlighted by the Torah because it goes against our expectations. We expect the meeting at the well to result in a story of “Toledot”. But nowhere to we read “these are the ‘toledot’ of Moshe”. There is no dynasty, no patriarchy. The glaring absence is quite jarring. It is as if the Torah is using the familiar motif to show us what does not happen, and to urge us to ask why not.

About the Author
Yael Shahar has spent most of her career working in counter-terrorism and intelligence, with brief forays into teaching physics and astronomy. She now divides her time between writing, off-road trekking, and learning Talmud with anyone who will sit still long enough. She is the author of Returning, a haunting exploration of Jewish memory, betrayal, and redemption.
Related Topics
Related Posts
Yael Shahar