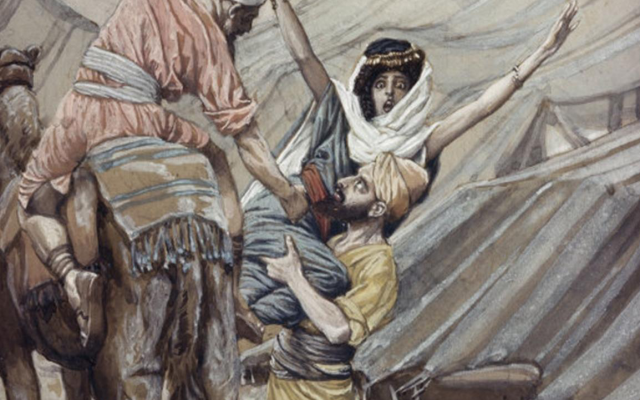 The Abduction of Dinah, By James Tissot - http://www.allposters.com/gallery.asp?aid=85097, Public Domain.

In our parashah, Yaakov, now at the head of a large family, heads home to the land of Canaan after living for two decades in the house of Lavan. During those 20 years, he has gone from being an “innocent” tent-dweller (ie., a shepherd) to being a savvy man of business. Having deceived his father and stolen his elder brother’s blessing, he has been deceived in his turn, and been given the elder daughter in marriage before the beloved younger. Measure for measure.

And now Yaakov is coming home. His first move may signal that he has learned the lesson well. He takes steps to symbolically return the stolen blessing. Recall the words of the Yitzhak’s blessing, the one that was meant for Esav: “May God give you of the dew of heaven and the fat of the earth, abundance of new grain and wine.” Yaakov now sends the fat of the land in a steady trickle, like the dew of heaven. Upon meeting his brother, he bows to the ground seven times, thus fulfilling the words “your father’s sons will bow before you.”

And, in that fateful midnight struggle with an unknown assailant, Yaakov is once again asked “what is your name?” And this time, he answers truthfully, winning the sought-for blessing honestly—as himself, and not as Esav. He has come full circle.

The test of favoritism

But there are hints that Yaakov has still to learn one crucial lesson. From the time he was born, he has sought to supplant Esav, perhaps even to be Esav. Now, having outwitted even the crafty Lavan, he has become a man of the world. Yaakov is now master of those traits of Esav that made him his father’s favorite.

But he has failed to learn the price of fatherly favoritism.

In fact, Yaakov repeats his father’s mistake long before he becomes a father, with his favoring of Rahel over her sister Leah. Yes, Leah was the wife that was foisted off on him, still one can also see the whole situation as a test: has Yaakov learned the lesson of how favoritism can tear a family apart?

Apparently not! The text in fact tells us that “God saw that Leah was unloved, and opened her womb, while Rahel was barren”. This seems a clear invitation to Yaakov to make amends. But if so, it’s one that Yaakov evidently doesn’t hear. In fact, while his father Yitzhak prayed on behalf of his wife in the same situation, we never hear that Yaakov tries to intercede on behalf of Rahel. When she says to him “Give me children or I shall die,” he snaps, “Can I take the place of God, who has denied you fruit of the womb?”

And so ensues the battle for Yaakov’s heart, with Leah attempting to lure her husband to her as the father of his children. The name she gives each child expresses her desire to be loved, “Reuven” – or “Look! A son!”, “Shimon” as a contraction of “He has heard my sorrow”; “Levi” for “He will accompany me”. Each name seems more desperate than the last.

It is noteworthy that Yaakov seems to be completely uninvolved in the naming of his children. Whereas Avraham named his sons (even in the case of Yishmael, where it was God who chose the name), and both Yitzhak and Rivka seemingly named their two sons, Yaakov seems to have no say in the matter.

Nor does he appear to see the nature of the competition going on in his family. The names of his sons certainly would seem a clear warning. Rahel names her surrogate son by Bilhah “Dan”, for “God has vindicated (judged) me; He has heeded my plea and given me a son.” When Leah later names her daughter “Dina” (the female equivalent of Dan, we readers can clearly see that this is more than a game.

And if “Dan” didn’t ring the alarm, the name of Bilhah’s next son, “Naftali” —”I have won!”— certainly should have! In short, Yaakov comes off as less than attentive to the struggles in his family.

Dina is Yaakov’s only (named) daughter. But she is introduced here as “Leah’s daughter whom she bore to Yaakov”. Not “Yaakov’s daughter”, but the daughter of Leah, the unloved wife. Leah, whose six sons will later grow to hate the beloved eldest son of Rachel. And so, the battle for Yaakov’s affections will be passed down to his sons.

We can learn a great deal about how the characters in the Torah relate to each other by noting how the text chooses to describe them. Dina starts out as “Leah’s daughter”, but to Shechem, the son of Hamor, the prince of the city, Dina is is just “her” in the objective sense: “He saw her, and took her, and lay with her by force.”

Even when Shechem warms to Dina, and decides he’ll do what the law of the time required, and marry the maiden he has despoiled, even then, she is only described as “the maiden”, never by name. To his father he says, “get me this girl for a wife.”

But when Yaakov hears of this, the tone changes, “He heard that he had defiled Dina, his daughter.” Our expectation is to see at least some sort of reaction from Yaakov. We would like to hear the words “Dina, my daughter,” from his lips.

Instead, we’re told that, since his sons weren’t home yet, he kept silent.  Dina’s brothers, however, are incensed, and come in from the field as soon as they hear what has happened. Their outrage is echoed in the text itself (a rare thing; normally, the text shows the nuances of a situation by refraining from expressing an opinion): “for he [Shechem] had committed an outrage in Israel by lying with Yaakov’s daughter—a thing not to be done.”

Oddly enough, while Shechem and Hamor begins their bargaining with Yaakov, together with his sons, it is the sons, not Yaakov, who answer with guile “because he had defiled Dina, their sister”.

And it is Dina’s brothers—Shimon and Levi—who rescue her from Hamor’s house, and then, in a rage go on a rampage through the town, murdering its inhabitants. Yaakov’s response to this is to worry that the surrounding tribes will rise up against him, a fear that later turns out to be unfounded. But it is his sons who have the last word: “Shall our sister be treated as a harlot?!” Indeed, the last word in the entire episode is “ahotenu“—”our sister”.

It would seem that Yaakov has failed to be a father to Dina, and so her brothers step in to fill the void. But where Yaakov might have found a way to diffuse the situation without violence, the zealotry and rage of Shimon and Levi leads to the kind of atrocities that will later earn the two brothers a harsh condemnation when Yaakov gives them their final “blessing”—”Let my soul not enter into their counsel!”

It may well be that the incident in Shechem was meant to serve as a warning to Yaakov. We never once hear the words “My daughter” from his mouth. He had all but abandoned Leah’s daughter, leaving the action to Leah’s sons. Might this be a sign of how Yaakov relates to Leah’s children in general? Later, we will be told in no uncertain terms that Yaakov sent his beloved Yosef to spy on Leah’s sons. Yaakov’s favoritism will thus put in motion a stream of events which will eventually lead the entire family to settle as migrants in Egypt.

It is no coincidence that our last parashah ended with Yaakov’s naming the place where he was reunited with Esav “Two Camps”. The irony is that he doesn’t see that “two camps” is exactly what he has made of his family, with dire consequences.