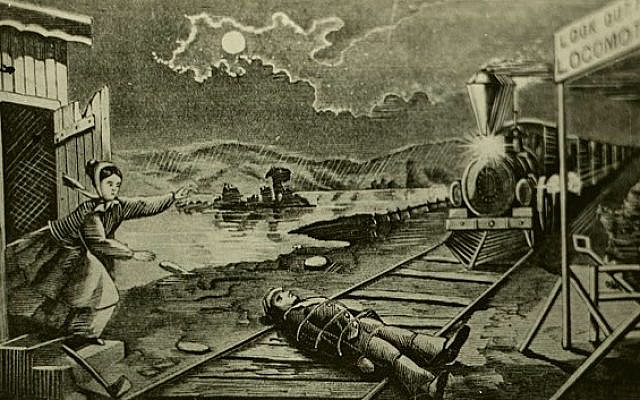 It is a well-known trope. The mustachioed villain in a hat ties the damsel to the railroad tracks. She lies there, helpless, screaming as the train rushes ever onwards. And at the last minute, the hero of the hour appears, cuts her bonds, and whisks her to safety in the nick of time.

You may have seen The Rocky and Bullwinkle Show where Snidely Whiplash ties Nell Fenwick to the tracks only for Dudley Do-Right of the Mounties to rescue her at the very last moment. Yet how many times was this theme actually featured in the silent movie era?

Surprisingly, the answer is none. As far as I can tell, no woman was ever chained to the tracks as the 10:50 train barreled down the line — other than in comedies which parody the cliché.

These send-ups of the genre included 1913’s “Barney Oldfield’s Race for a Life” and 1917’s “Teddy at the Throttle” (in the latter, Gloria has to rescue herself with the help of Teddy the Dog, because the “dashing” hero arrives too late).

By the second decade of the 20th century the heroine tied to the tracks was already stale.

But a few decades earlier, before the movies, in the Victorian melodramas, it had been incredibly popular.

The scenario appeared in 1863 in the London play “The Engineer,” and in a short story entitled, “Captain Tom’s Fright,” published in 1867. But the play that made it famous was “Under the Gaslight”, by Augustin Daly, which opened in New York a few months later in 1867. And then it really took off.

According to Nicholas Daly’s* 1999 article, in autumn 1868 in London you could have gone to the Victoria, the Surrey, the East London, the New Standard and the Princess’s to see Mocrieff’s “The Scamps of London”, Watt’s Phillip’s “Land Rats and Water Rats,” George Spencer’s “Rail, River and Road,” Alfred Rayner’s “Danger” and Dion Boucicault’s “After Dark, or, A Drama of London Life.” In each of these, a train burst onstage, allowing a hero or heroine to be rescued just in the nick of time.

Daly wasn’t happy with this, and demanded he be credited with inventing the oncoming train setup. He sued a production of “After Dark” for stealing his idea (even though the defendants argued that Daly was not the first to come up with this plotline). In a landmark copyright case, the court ruled that other plays infringed Daly’s intellectual property rights even if they did not use his dialogue and it wasn’t exactly the same scene. Despite the ruling, theaters continued to use the railroad scene, assuming that Daly wouldn’t be able to sue everyone.

Dramatic rescues from steam trains were what people in the late 1800s wanted to see. The industrial revolution had introduced theses huge, powerful, noisy, steam trains as a major form of transportation. London Underground’s Metropolitan Line opened its first section on January 10, 1863, and Victoria mainline station had opened three years earlier. Like any new technology, the steam engine both transformed the lives of the Victorians, but also terrified them. It was perfect as a dastardly murder weapon.

But the late 1800s was also when more and more people were moving from villages and farms to the big cities. The industrial revolution changed the way people worked. Instead of tilling the land, there was now more money to be made in London or New York. But after work, the homesick farmers wanted to watch melodramas in which the heroes were decent, honest, country folk, protecting the weak against the evils of the modern world.

The interpersonal relations we see onstage make sense only within the context of the experience of offstage urban modernity… Such is the case with the railway rescue scene, where the human encounter with the machine is quite literally produced onstage. Not only did audiences want dramas of contemporary urban life, they demanded to see the very artifacts of modernity on the stage.

And in London, and in cities around the Western world, it was often the Jews who were identified as the personification of “an amoral, cash-driven, modern culture,” (Daly).

Boucicault’s “After Dark” features Morris and Bellingham as railway-age scoundrels. Morris is a Jewish casino owner. He has an “un-English” accent and is described as, “A Jew horse dealer.” In the penny-pamphlet version of the play by Henry Llewellyn Williams, the description of Morris states:

His curly black hair was lustrous with il; and so were his whiskers, which almost come round to his nose – a nose that revealed the Israelite a mile off, though Mr. Dicey Morris has the impudence to deny he was born on of ‘the peoplesh.’

There was another 1800s theme running through many of these plays, including “Under the Gaslight” – women’s suffrage.
In our modern cartoon version of the scene, it is a helpless, screaming heroine tried to the tracks, waiting for a man to save her. But in 1887, when Laura saved Snorkey — a one-armed veteran — she was demonstrating that women are equal or superior to men.

Snorkey. Cut the woodwork! Don’t mind the lock—cut round it! How my neck tingles! (A blow at door is heard.) Courage! (Another.) Courage! (The steam whistle heard again—nearer, and rumble of train on track. Another blow.) That’s a true woman! Courage! (Noise of locomotive heard—with whistle. A last blow; the door swings open, mutilated—the lock hanging—and LAURA appears, axe in hand.)
Snorkey. Here—quick ! (She runs and unfastens him. The locomotive lights glare on scene.) Victory! Saved! Hooray! (LAURA leans exhausted against switch.) And these are the women who ain’t to have a vote!
(As LAURA takes his head from the track, the train of cars rushes fast with roar and whistle from L. to R. H.

I was struck by the similarity of the railroad track last-minute rescue demonstrating the superiority of women and the beautiful poetic high-point of this week’s Torah portion, Beshalach.

The Israelites fled on foot from slavery in Egypt with Pharaoh and his cavalry in hot pursuit. Rather than lead them in a direct path to freedom, God has Moses take the nation on a detour to the Red Sea where they are forced to stop by the water in their path.

Chained to the spot by the sea ahead of them, as the Egyptian army heads full steam toward them, the Israelites appear doomed. Then, at the very last moment, God splits the sea and the nation escapes to the other side. Then they watch as the dry land turns back to sea, drowning their former oppressors in the tumultuous waters.

As the bodies of their tormentors wash up on the beach, the Israelites sang a song of triumph. Actually, two songs.

First the men sang a page-long chorus praising God for the miracle (Exodus 15:1-19). Then the women, led by Moses’s sister Miriam, sang a single line of praise (Exodus 15:21).

Why did it take the men 19 verses to express what the women sang in a single sentence?

I would like to suggest that it is because the women constantly saw God’s miracles around them. This was just one more miracle. Sure, it was a huge one. But not fundamentally different to the miracles the midwives had seen each day in Egypt when secretly delivering babies away from the watchful eyes of Pharaoh’s guards. Not so different from the constant miracles of life and existence which they saw every moment during the years of slavery. They were attuned to the fragility of life and God’s constant, caring presence. For them, a single line expressed their gratitude for the miraculous salvation.

The men, worn down with the back-breaking work, were unable to see God in their lives. Yet even after they left Egypt, they remained blind to the ever-present miracles. So, when God split the sea and killed their enemies, they saw this as huge. They expressed their perception of the magnitude of the miracle in song.

But the problem with one-time mega-miracles is that the gratitude does not last. A couple of verses after leaving the Red Sea, the Israelites came to Marah and complained against God. And a few verse after that (Exodus 16:3) the men said:

If only we had died at the hand of God in the land of Egypt, as we sat by the fleshpots eating bread until we were sated. But He brought us out to this wilderness to kill the entire community with hunger.

Then at Rephidim (Exodus 17:3), the men again complained:

Why did you bring us out of Egypt, to kill me and my children and my flocks with thirst?

And even after God had miraculously provided them with manna to eat and water from Miriam’s well to drink, they said (Exodus 17:7), “Is God among us or not?”

The problem with seeing a huge miracle is that it is fleeting. The men were so grateful that God saved them. But within a few days or weeks they had forgotten the gratitude and didn’t remember that God had brought them to freedom, killed their oppressors, and provided then with miraculous food and water. They had been saved at the last moment from the onrushing train but after saying thank you their lives were no different.

The women were not part of these complaints. They understood that the miracle at the sea was just one of the infinite ever-present miracles. Sure they had been rescued at the sea, but they knew that God also saved them every single day and every minute.

*Nicholas Daly does not say whether or not he is related to Augustin Daly.

I’m giving a nine-part series at WebYeshiva on “Rabbis of the 19th Century.” You can listen to the live or recorded Torah classes by registering on the website. I’ve also started sharing more of my Torah thoughts on Facebook. Follow my page, Rabbi Sedley.

About the Author
David Sedley lives in Jerusalem with his wife and children. He has been at various times a teacher, translator, author, community rabbi, journalist and video producer. Born and bred in New Zealand, he is usually a Grinch, except when the All Blacks win. And he also plays a loud razzberry-colored electric guitar.
Comments