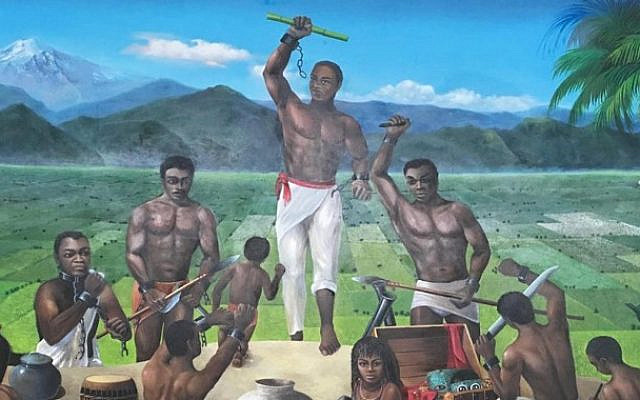 Kirk Douglas passed away this week, aged 103. He was one of Hollywood’s finest actors, and helped break the 1950s Hollywood blacklist of alleged communist sympathizers by hiring Dalton Trumbo as a scriptwriter.

He was always proud of his Judaism. In 1991, following a near-fatal air collision, he began studying Torah and became even more connected to his Jewish heritage. But my favorite quote from him about Judaism is this one:

“I always fasted on Yom Kippur,” he told a reporter. “I still worked on the movie set, but I fasted. And let me tell you, it’s not easy making love to Lana Turner on an empty stomach.”

Douglas is perhaps most famous for his portrayal of Spartacus, the leader of a first century BCE Roman slave rebellion. There is very little historical information about Spartacus, and we know nothing about what happened to him after the rebellion. So I’ll leave him aside this week and write instead about a more recent slave leader. 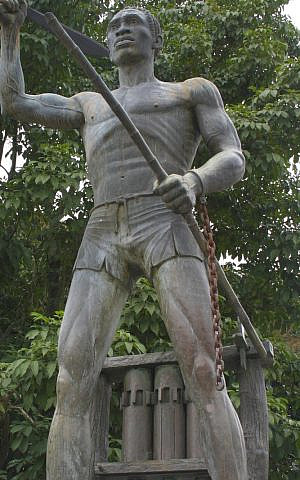 Gaspar Yanga was born into a royal family in West Africa 1545. He was described by a contemporary Jesuit priest as being from the “Bron nation.” Some accounts say that he was from Nigeria, others say from Ghana, or perhaps from Gabon. What is certain is that he was captured and brought by Spanish slave traders to Mexico, which was then part of New Spain.

Even though the Spanish enslaved the local people, they also imported slaves from Africa to work primarily on the sugar plantations.

Yanga worked in the Nuestra Señora de la Concepción (our Lady of the Immaculate Conception), not far from the gulf port of Veracruz.

In 1570, Yanga led a group of slaves to freedom. They escaped from the plantation and set up their own community, or palenque, in the jungle-covered mountains near Veracruz.

More and more escaped slaves gathered under Yanga’s leadership. Yanga was the religious, political and military leader and created a primarily agricultural community. His people also occasionally raided the Spanish along the Camino Real (Royal Road), the main route from Mexico City to Veracruz.

They were known by their former slave masters as “cimarrón,” meaning “fugitives” (this has become the English word “maroon”). For decades they flourished. A contemporary Spaniard wrote that:

…this Yanga… who had been the first maroon to flee his master and for thirty years had gone free in the mountains and he has united others who held him as chief, who are called Yanguicos.

Eventually, the Spanish decided that this state of affairs was unacceptable. Yanga and his community were a threat to the colonial slave-based economy. In 1609 Pedro González de Herrera led about 550 well-armed Spanish soldiers to defeat the palenque.

Wishing to avoid a battle, Yanga offered the Spanish a peace treaty. His people would stop raiding the highway, would pay a tribute to the Spanish and would not allow any more escaped slaves to join them, in exchange for self-rule. De Herrera rejected the terms and marched against the city.

Yanga was already quite old by this time, so another former slave, Francisco de la Matosa was charged with defending the palenque. Only about 100 of his men had firearms, and another 400 were carrying bows and arrows, machetes or even just rocks.

Although outnumbered and faced with superior weapons, the former slaves had spent decades learning their way around the terrain, and were able to launch surprise attacks against the troops.

There were heavy losses on both sides, and although the Spanish took the palenque and burned it to the ground, Yanga and his community fled to the hills and could not be defeated.

By 1618 the Spanish had enough, and agreed to Yanga’s terms. The palenque was officially recognized by the authorities and named San Lorenzo de los Negros.

In 1871, 50 years after Mexico achieved independence, Yanga was officially recognized as a Mexican national hero. In 1932, the town of San Lorenzo de los Negros was renamed Yanga in his honor.

IMDB claims that a movie about Yanga is in development, but he remains virtually unknown even in Mexico, and even more so outside the country.

Both Spartacus and Yanga had an advantage over Moses, who in this week’s Torah portion of Beshalach, led the Israelite slaves to their freedom. Spartacus and Yanga had both been slaves just like the people they led. Although it cannot have been easy to create a stable community, it was always clear that it was former slaves against their former masters. But Moses was never one of the slaves and never fully accepted by the people he led.

From the moment the Israelites left Egypt, and as soon as the immediate threat of capture dissipated, it was the people against Moses.

Chapter 15 of Exodus contains the song of thanksgiving for the miraculous defeat of the Egyptians and the splitting of the sea. Yet only three verses later (Exodus 15:24) the former slaves began complaining about Moses’s leadership.

The people complained about Moses [saying], ‘What will we drink?’

Moses had grown up in a very different environment from the people he led. He was never a slave and was raised in Pharaoh’s palace, before fleeing the country. At least he had his brother Aharon, who had spent his entire life with the Israelites in Egypt, to help him lead. But Aharon had also never been a slave, and when things got tough the people turned on both their leaders (Exodus 16:2-3).

The entire congregation complained about Moses and Aharon in the desert. The Children of Israel said to them, ‘If only we had died at the hand of God in the land of Egypt, while we sat by the meatpots, eating bread until we were sated. But you brought us into this desert to kill this entire community.’

We can understand people who fear they are faced with death, thirsty and starving, hallucinating about the past. But their incessant complaints against Moses and Aharon — which continued throughout the four decades they were in the desert — point not only to ingratitude, but to the disconnect between the leadership and the nation.

Although by the time of his death, Aharon was beloved by the people, he and Moses were never part of the people. They had come as outsiders and imposed freedom on the suffering slaves, challenging Pharaoh and enticing the nation with a dream of the promised land.

Whenever things went wrong, the nation turned against the leadership who had forced them not only into freedom, but also to accept the laws of the Torah (Exodus 15:26).

He said, ‘If you listen to the voice of the Lord, your God, and do what is right in His eyes, listen to His laws and guard His statutes, all the diseases I placed on Egypt I will not place on you, for I am God, your Healer.’

For 40 years the people resented Moses, and often rebelled against his leadership. He was the spokesperson for God, and they blamed him for everything.

Yet Moses was caught between a rock and a hard place because God blamed him for every sin the people committed, and treated the leader as if he was one of the people (Exodus 16:28):

God said to Moses, ‘For how long will you refuse to observe My commandments and My Torah?’

Spartacus and Yanga must have struggled constantly to create a community and safety for their followers. But they did so as part of that community, with a shared background and with similar hopes for the future.

Moses struggled to create a nation while facing complaints from both the people he had led to freedom, and God who had told him to be the leader.

I wish I had a powerful ending, but I don’t. Just two unanswered questions:

Is it better for a leader to be one of the people, or can an outsider accomplish more, despite the antagonism?

And why did God force Moses to become the unwilling leader, then turn against him, holding Moses responsible for every negative action committed by God’s people?