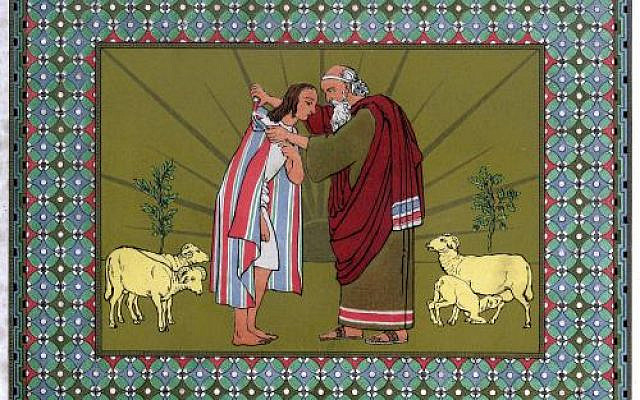 From 'The History of Joseph and His Brethren,' illustrated by Owen Jones. (Day & Son, 1869' scanned and archived at www.OldBookArt.com, public domain)

The Talmud in Shabbat 22a interrupts its discussion of the laws of Hanukkah and describes the pit into which Joseph was thrown by his brothers. The association between the two events is further highlighted by the fact that the story of Joseph is always read on Hanukkah. But what is the connection between these two stories?

Rabbi Joseph B. Soloveitchik (“the Rav”) explored this question in an essay, “Joseph and Hanukkah,” found in the collection, Days of Deliverance, and also in a recorded shiur he gave that was transcribed by Rabbi Reuven Spolter. I would like to explain his approach.

To begin with, the story of Joseph should never have happened. There are too many absurdities that make the story irrational, incomprehensible, and therefore illogical. For example, every parent is aware of the impropriety of blatantly favoring one child in the family. How could Jacob miss this? Surely he was aware of the deep animosity the brothers had for Joseph, so what could he have hoped to achieve by sending his favorite out to check on them?

Another example: It should have been abundantly clear to the brothers how morally repugnant it was to sell their brother into slavery, no matter how much he was loathed. And why would the one, Reuven, who had secretly resolved to rescue Joseph disappear from the scene before doing so? Surely, he should have stuck around to protect him! Moreover, why did Judah think that selling Joseph was better that leaving him in the pit?

The key to understanding all these puzzling events is found in the words “and a man found him wandering in the field” (Gen 37:15) – when Joseph went out to find his brothers, he apparently lost his way. Yet why does the biblical text include this apparently trivial piece of information? What is significant about Joseph getting lost? Why didn’t he simply return home, once he couldn’t find his brothers easily? And how coincidental that Joseph happened upon a stranger who had “overheard” the brothers and knew where to direct Joseph.

Rashi explains that actually the mysterious stranger is the angel Gabriel, whom we may consider the executor of Jewish history. As God’s messenger, he is responsible for guiding, directing, and tending to path of the Jewish people through time, overseeing the strange and unique destiny of the Jewish nation. According to the Rav, this figure was a peculiar man, a strange man, a mysterious man — or: not a man really at all, but a messenger of God. Thus, we may infer that Joseph finding his brothers (assisted by this figure) and then the brothers selling him, such that he ended up in Egypt, and eventually in a position to help his family, which in turn brought about the exile in Egypt, was all God’s will.

Despite all his prowess, however, Joseph, in many respects, remained a tragic figure. His brothers despised him. He endured slavery for 13 years. He did hard time in prison. Even when he rose to royalty, he was considered a foreigner by the Egyptians (Gen 43:32). It would seem that the Egyptians tolerated him for utilitarian reasons, but never fully accepted him. For all that he was privileged to be God’s instrument for rescuing and preserving the future Jewish people, the cost to Joseph personally seems to have been extreme.

So was the cost to Jacob. Recall that he left his homeland for what became essentially a long night of darkness, misery, and distress. He was the first Jew to live in exile for an extended period, namely, in the house of Lavan. Moreover, according to the Midrash, he dwelled in that hostile environment while maintaining his observance of God’s word and moral code. On Jacob’s declaration “Im Lavan garti” – I sojourned with Lavan (Genesis 32:5), Rashi notes that the patriarch implied that he kept all of the commandments despite living in Haran. He “sojourned,” never quite settling down (“yashavti” would have been the Torah’s word). Thus, Jacob never fully integrated into Lavan’s society – implying that just as an individual can maintain his identity in a foreign environment, so too could a nation do so in exile.

But why did both Jacob and Joseph need to experience such isolation in their commitment to what became the Jewish ethics and morals?

Jacob’s experience in undeveloped, desolate Haran demonstrates that one can maintain the commitment to God and the Jewish people in the face of poverty and oppression. No matter how downtrodden the immigrant, or how hard the work, people can make up their minds to maintain their allegiance to God, and succeed. In contrast, Joseph achieved power and wealth in one of the most advanced civilizations of its time. His commitment to the family traditions demonstrated that enormous success, admiration, and unqualified authority are not incongruous with a Jewish spiritual lifestyle.

Rabbi Soloveitchik lamented that, historically, Jews have not followed in Joseph’s footsteps, despite his example. While Jews have remained loyal to the tradition in poverty and while under persecution, they have not maintained that spiritual connection to the same degree when living under circumstances of material wealth. As Jews have risen to prominence in secular society, they have not overcome the challenge of elevating their own historic values.

And with this observation, a key connection between Joseph and the Hanukkah story is revealed.

The Hasmoneans saved the covenantal community — and were chosen to do so by God, though He did not intervene with flashy plagues or awe-inspiring sea-splitting. Rather, he required the Hasmoneans’ total involvement in their cause — personal sacrifice, courageous plans, and heroic decisions. Comparable expectations to what Joseph experienced. That is, both Joseph and the Hasmoneans had the difficult destiny of suffering, even despite the context of their national success.

The question of exile also underpins the connection between Joseph’s story and that of Hanukkah, and it may help answer at least one of the troubling questions on this week’s parashah.

Consider the “ketonet passim,” Joseph’s famous coat of many colors. When Jacob singled out this one son among the many others who wore simple jalabiyas, the garb common to the Land of Canaan, he fundamentally prepared him for the exile that would come. That is not to say that he knew of Joseph’s experience in Egypt, but he gleaned from his own experience of exile and conveyed it to Joseph. The ability to stand out and stick to one’s traditions was essential.

It would seem that Joseph was attuned to the norms of Egyptian society (remember that his brothers perceive him as an Egyptian, even as the Egyptians may not have quite made him one of their own). Thus, he was selective in adopting certain elements of Egyptian culture – and was able to become second the pharaoh himself. But he retained his home identity too, a measure of moral beliefs and holiness. A difficult path to tread to be sure, but the way to create harmony between the Jewish faith and the culture of the Western world in which we live. That is, we must be selective in what we adopt and what we leave aside.

The message is the same from the Hanukkah story. As soon as the Hasmoneans laid down their arms, they turned their attention to the Temple and the need to light the menorah there with pure oil. Their focus shifted from the material world in which they fought the Greeks to the spiritual one of Jewish greatness. But as much as the Hasmoneans rejected the Greek culture in the need to preserve their Jewish identities and practices, they did so with care. We know, after all, that not all of Greek culture contradicted Jewish values. For example, Judaism recognizes the power of beauty that was of cardinal importance in the Greek world, and finds a place for it within our own mores.

In many ways, the stories of Joseph and the Maccabees serve as a blueprint for living in the pre-Messianic era, whether in Medinat Yisrael [the State of Israel] or the Diaspora, when we, too, are called upon ‘to guard … the pride of our people and the grandeur of the Torah.’

About the Author
Dr. Chana Tannenbaum lectures at Bar Ilan University, Michlelet Herzog, and Matan. She has worked as a Jewish educator, in teaching and administration, for more than 30 years. She earned her doctorate at Yeshiva University, where she was also the recipient of the Baumel award, given to the most outstanding faculty member throughout Yeshiva University. Dr. Tannenbaum made aliyah with her family in 1997, moving to Nof Ayalon.
Related Topics
Related Posts
Chana Tannenbaum