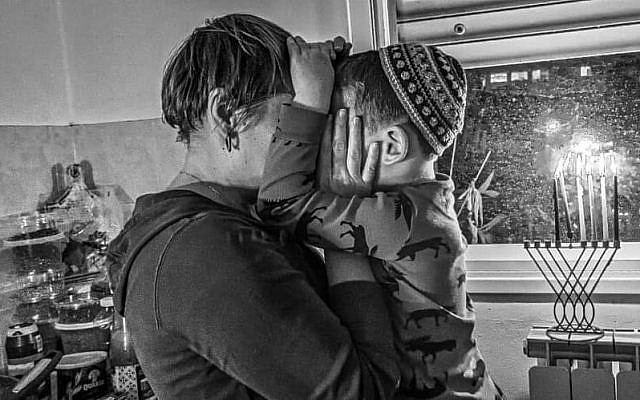 The gift of raising their children Jewishly in Israel. (Photo: Boris Hanoch)

“Do not pressure the Convert, but know his soul, because you were strangers in the land of Egypt…” (Shmot 25)

Rashi’s concise commentary struck such a cord with me, having accompanied many young Olim through the conversion process in Israel.

We do not have perspective of this current miraculous period in history, when an average 1100 Russian-speaking Olim move to Israel every month (down to 900 per month during Corona), comprising 51% of the total aliyah.

But many of us remember when this was just a pipe dream, and, aside from the Lubavitcher Rebbe who spoke about this as early as the 1960’s, few anticipated the fall of the Iron Curtain and the arrival of over 1 million Russian speaking Jews to Israel by the end of the 20th century.

According to official statistics, over half of the Russian-speaking aliyah in the past decade is under 35. These talented and motivated young Olim are transforming Israel in every field.

Many arrive without family, and our national social and educational non-profit, Shishi Shabbat Yisraeli, has helped absorb thousands of them personally, culturally and professionally over the past ten years.

While some FSU olim do end up in Israel seemingly “by accident” – with no clear attachment to this country, most choose Israel because of their Jewish identities, as the most viable future home for themselves and their families.

Regarding the Ger in our Parasha, we know that about one third of the Russian-speaking aliya is not Halachically Jewish, and only a small number of these choose the path of conversion, with about 1800 successfully completing this process  every year.

There are nuances here that I would like to share, that take the mitzvah of “knowing the convert’s soul” to the next level. I think that this phenomenon – like many other challenges Israel faces –  demands both our personal refinement and halachic sensitivity and creativity on a massive scale.

Firstly, it is important to know that for many young Olim who make the natural choice to move to Israel because of their prior Jewish involvements in the FSU, their non-Jewish status comes as a shock.

A close friend who was very active in her hometown Jewish community shared with me with her introductory letter to the Israeli Conversion Court, which describes her trauma upon arriving in Israel and realizing that she would never be accepted as a Jew here.  She wandered around Europe for several months before she felt whole with her decision to return to Israel and study for her conversion, completing it within a year.

I have seen other Russian-speaking Olim make the very personal decision to convert after years of exposure to positive Jewish content and experience, through our community and other frameworks. These Olim also want their children to grow up Jewishly, without crises of identity – internal or bureaucratic.

There are also, of course, the incredible phenomena of the  “Gerei Tzedek” (Righteous Converts), and  not only among Russian-speaking Olim – non-Jews whose spiritual search leads them to a traditional Jewish way of life in Israel.

They have more Jewish “chen” than my grandmother, and I sense that they too stood at Sinai, but assimilation and the ravages of history uprooted them along the way from our People.

Whatever their personal motivations to convert, converts achieve an impressive level of Jewish literacy through their Conversion Courses which halevai was the basic common body of knowledge shared by Jews around the world.

Very dedicated educators teach these courses, covering Jewish thought, history, and values, in addition to every day Jewish practices, and most Olim find them enriching and rewarding.

Of course they must fit these classes in between work and studies and family, and sometimes endure real emotional challenges, whether it be a sense of alienation in their neighborhood synagogue or difficulty finding a warm, “adoptive” family to spend Shabbat and holidays with, and to turn to for advice.

And as intimated by the Torah, the final process of coming before the Beit Din causes pressure for most Olim. On the one hand they must prove their knowledge of practical Judaism such as Shabbat laws, daily blessings – important elements of Jewish mindfulness.  On the other hand, both they and the three rabbinical court judges know that they are at the beginning of a lifetime process of spiritual exploration, but must promise their full observance and commitment .

I know several of the rabbis of the Beit Din – mostly accomplished Religious-Zionist leaders in their public lives – and they have told me that their goal is to convert as many Olim as possible.

They are usually warm and show genuine interest in the candidates, trying to check their overall Jewish “geshtalt”.  “What are the three pilgrimage festivals?” they may ask.  “Who came first – Jacob or Moses? What happens in this week’s Parasha?”

Only occasionally are there questions on how to be a “mentsch” – the ethics and wisdom that likely drew these individuals to Judaism.  But happily, in the majority of cases that I’ve been involved in, the meeting ends with the tearful moment where the Olah stands, covers her eyes and recites “Shema Yisrael” out loud.  And the rabbis respond “Baruch Shem Kavod Malchuto Leolam Vaed” – May God’s name be blessed for ever and ever.

And then, sitting in the coffee shop afterwards, more tears of joy and relief.

On the other hand, less than 50% of Olim who begin the conversion process complete it.  For those who reach the Beit Din,  their brief encounter with the judges and letters of recommendation do not allow these rabbis to understand the complex worlds of these Olim, and sometimes their judgment is misguided.  At best, they defer the potential convert for a few months, which in a recent case has now turned into 9 months because of Corona.

The current limited, centralized system controlled by the Israeli Rabbinate, means that most non-halachically Jewish Olim will not convert,  but will continue to help build Israel and feel an integral part of our society.  The challenges regarding their Jewish identity and their ability to marry our children and grandchildren in the framework of Jewish law will increase with their numbers.

The return of the authority to both teach and convert to community rabbis would create a more efficient, personal, and sensitive system and likely convert many more interested Gerim.  Until recently, this was the accepted practice in the Jewish world.  This approach has been readopted by the independent Giyur K’Halacha organization which has converted over 1000 people, mostly from the FSU, over the past 5 years.

And no less importantly – programs which encourage Jewish education and conversion for those interested before their aliyah, particularly in former Soviet countries, would  make a big contribution to the acculturation of FSU olim and the future of Israeli society.

In the meantime, our organization tries to meet young Russian-speaking Olim  at heart level, where they are, and help them formulate their own evolving, personal Jewish identity in Israel.

Each of us can also do our small part to help young FSU Olim feel welcome and appreciated, including reaching out to those in the conversion process, who probably need an encouraging word.

At the end of our Parasha, the admonition to not cause suffering to a Ger comes just before the mitzvot of observing the seventh Sabbatical year and the three agricultural, pilgrimage festivals,  as if to say – your homecoming to the Land of Israel and the celebration of its prosperity will warrant the sensitive welcoming of many converts.  Israel has experienced 73 years of abundant immigration, but it is now in its peak, potential period of welcoming the “stranger” and the convert.

May the State of Israel and each of us individually rise to this challenge.

Shabbat Shalom and to a Joyful Adar – we can do this!