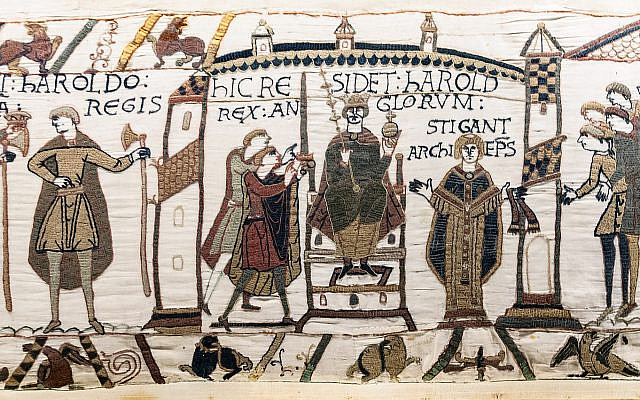 On October 14, 1066, Harold Godwinson, the last Anglo-Saxon King of England, was killed at the Battle of Hastings. In a few hours, William of Normandy had gone from being known as William the Bastard to William the Conqueror. His descendants would remain on the English (and later British) throne until today.

Harold had only been king for a few months, succeeding his brother-in-law Edward the Confessor, who had died on January 5, 1066. And, according to many sources, Edward had promised the crown to William.

But Harold’s father, Godwin, Earl of Wessex, had been one of the most powerful men in England. In those days, earl was one step below the king (and one step above thegn). Godwin’s father was likely a thegn named Wulfnoth Cild. Æthelstan Ætheling, eldest son of King Æthelred the Unready, died in 1014 and left Godwin an estate in Sussex that had probably been earlier confiscated from Wuflnoth.

When the Viking prince Cnut became King of England in 1016, Godwin’s rise was rapid. By 1018 he was an earl of a part of eastern Wessex, and by 1020 he ruled over all of Wessex, one of four earldoms in England at the time. 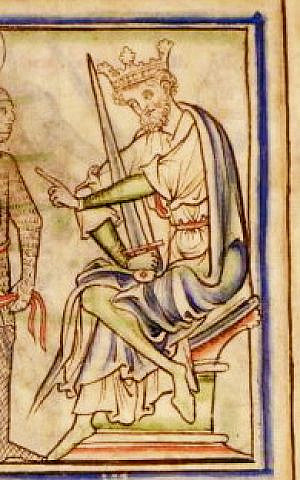 Cnut died in 1035, aged only 40. His throne was claimed by his illegitimate son Harold Harefoot, but the Æthelnoth, Archbishop of Canterbury refused to crown him. Godwin supported Harold (as did Leofric, Earl of Mercia, the husband of Lady Godiva), and in 1037 Harold was proclaimed king.

That same year Harold’s stepbrothers, Edward and Alfred Ætheling — sons of Æthelred the Unready and Emma of Normandy — showed up. The Danish King Cnut had married their mother after the death of their father, but they felt that their claim to the English throne was stronger than that of the Danish Harold. They sailed over from France to England accompanied by a strong military force of Norman soldiers.

According to the Anglo-Saxon Chronicle, a contemporary but not unbiased historical record, Godwin intercepted Alfred and treacherously killed the soldiers who accompanied him. He turned Alfred over to Harold, who had him blinded, and taken to the monastery of Ely where he died a short while later.

A.D. 1036. This year came hither Alfred the innocent etheling, son of King Ethelred, and wished to visit his mother, who abode at Winchester: but Earl Godwin, and other men who had much power in this land, did not suffer it; because such conduct was very agreeable to Harold, though it was unjust.
Him did Godwin let, and in prison set.
His friends, who did not fly, they slew promiscuously…
A deed more dreary none in this our land was done,
since Englishmen gave place to hordes of Danish race…
The prince with courage met each cruel evil yet;
till ’twas decreed, they should him lead,
all bound, as he was then, to Ely-bury fen.
But soon their royal prize bereft they of his eyes!
Then to the monks they brought their captive; where he sought
a refuge from his foes till life’s sad evening close. 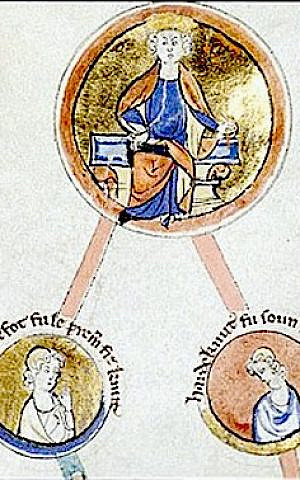 When Harthacnut succeeded Harold Harefoot as king of England, Godwin was in a tough situation. Harthacnut was the son of Cnut and Emma, and thus Alfred’s half-brother. Queen Emma demanded vengeance for the murder of her son, Alfred, and brought Godwin to trial. The earl escaped punishment by bringing witnesses that he had acted on Harold’s orders, and did not intend for Alfred to be killed. But he gave Harthacnut a luxurious ship which was worth as much as the fine he would have had to pay had he been found guilty.

Eventually, Godwin regained his power, and after the death of Harthacnut, he supported Edward’s claim to the throne, who would soon become his son in law, marrying his daughter Edith (Eadgyth) in 1045. However, Edward, who had lived for much of his life in France, reportedly appointed William of Normandy as his successor.

Godwin was opposed to the growing Norman influence and the possibility of William becoming king. In 1051, Edward forced Godwin and his sons into exile. But they returned with an army the following year, and Edward was compelled to restore Godwin’s earldom. 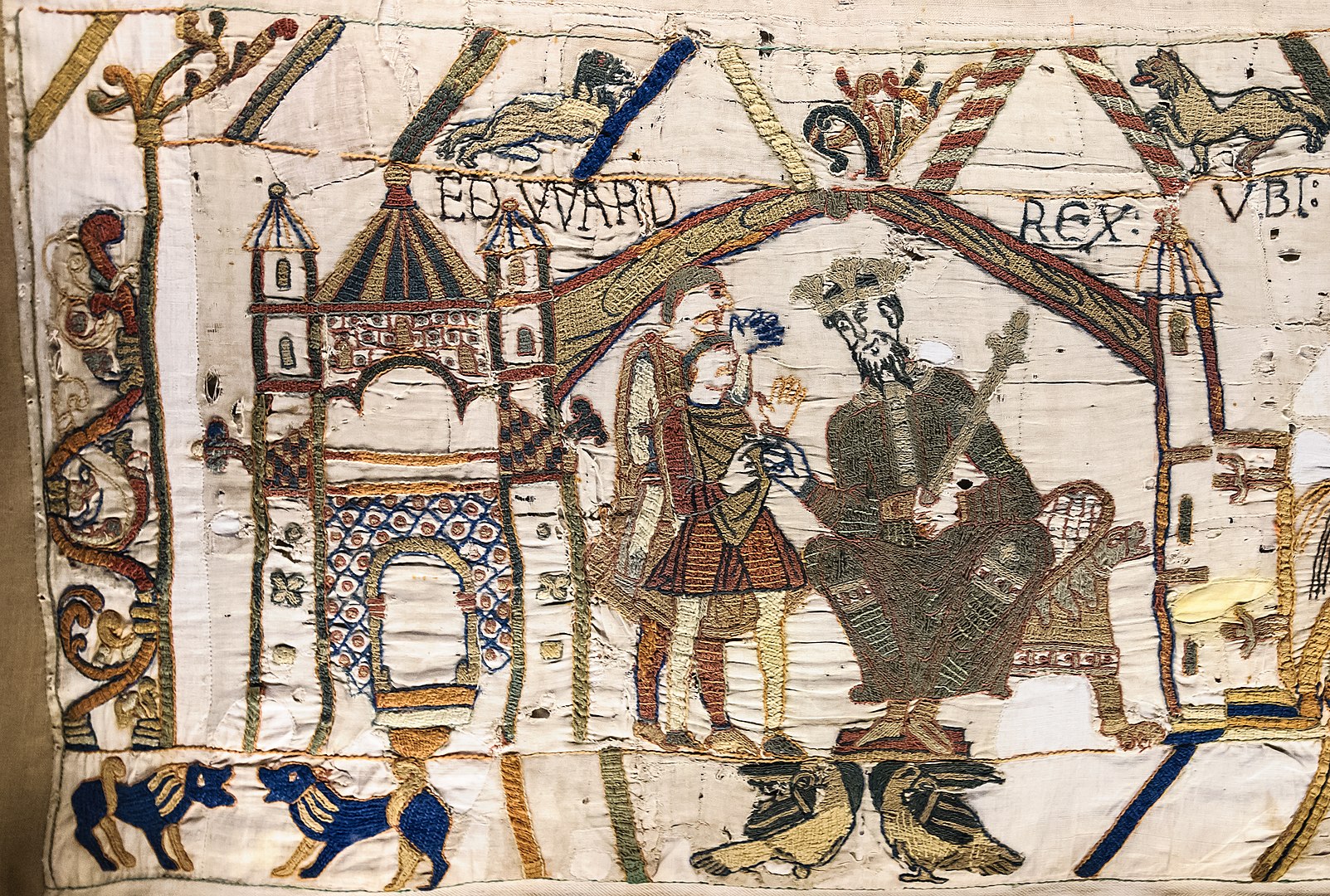 It is interesting to think that had Godwin not opposed William, there could have been a peaceful transfer of power and the Battle of Hastings would never have happened.

To the end of his life, Godwin denied that he had ordered Alfred’s death. In fact, according to a history written in the 12th century by Aelred of Rievaulx, Godwin’s last words at a Royal banquet at Winchester were:

May this crust which I hold in my hand pass through my throat and leave me unharmed to show that I was guiltless of treason towards you, and that I was innocent of your brother’s death!

Godwin died suddenly on April 15, 1053, and never lived to see his own son on the throne or his death at Hastings.

Although there is not much evidence for the story of Godwin trying (and failing) to prove his innocence through food, it was something practiced in Anglo-Saxon law in slightly earlier times.

Corsned was a legal practice whereby a person would eat a certain food to prove their innocence. William Blackstone wrote in Commentaries on the Laws of England: In Four Books, Volume 4:

The corsned, or morsel of execration: Being a piece of cheese or bread of about an ounce in weight, which was consecrated with a form of exorcism; desiring of the Almight that it might cause convulsions and paleness and find no passage if the man was really guilty; but might turn to health and nourishment if he was innocent.

Blackstone compares this practice to the sotah water mentioned in this week’s Torah reading, Nasso:

As the water of jealousy among the Jews was, by God’s special appointment, to cause the belly to swell and the thigh to rot if the woman was guilty of adultery.

The ceremony is described in Numbers chapter 5. A man who suspected his wife of adultery would bring her to the Temple. There the woman would offer a sacrifice. The priest would make her swear that she was innocent. Then the priest would write certain verses on parchment, dissolve them into water and make her drink the water.

If she was impure and had sinned against her husband, the bitter waters would enter inside her; her belly will swell and her thigh drop, and she will become a curse among her people. But if the woman was not impure, but she was pure and innocent, she will conceive a child.

The rabbis of the Mishna and Talmud (Sotah 20a) – though they had never seen the ceremony preformed — described the details, including what happens to the woman if she is guilty:

Before she finishes drinking, her face becomes green, her eyes bulge out and she is filled with blood vessels. They would say, ‘Take her out so that the Temple does not become impure.’

However, this was a test not only of the woman, but also of God and the truth of the Torah. The rabbis were concerned that the punishment might not occur immediately, which could weaken the faith of those watching. So they explained that sometimes the punishment may not be immediate.

And what was the specific merit that could delay the punishment? Learning Torah.

Based on this, Ben Azzai said, ‘A man is obligated to teach his daughter Torah, so that if she drinks [the sotah water] you will know that it was the merit that delayed the punishment for her.

Anyone who teaches his daughter Torah is as if he taught her promiscuity.

This section of Talmud is the primary source for the centuries-long dispute about whether a father may teach his daughter Torah or not. This is not the place for a full discussion of this topic. But it is true to say that notwithstanding the Talmud and rulings in the subsequent codes, throughout history there have been women who were expert Torah scholars.

Rabbi Yisrael Meir Kagan, better-known as the Chofetz Chaim, did not discuss the issue in his major legal work, Mishnah Berurah, written between 1896-1904. But he does add a footnote in his book Likutei Halakhot, which is a halakhic summary of parts of the Talmud. In Sotah 11a, on the passage of Talmud stating that Rabbi Eliezer is against fathers teaching Torah to their daughters, the Chofetz Chaim wrote:

It seems that all this was specifically in those earlier times, when each person would live in the same place as their parents, and the tradition of the parents was very strong for each person. They would follow the path that their parents had walked… Regarding this we could say that she should not learn Torah. She could rely on the actions of her upright parents.

But nowadays, due to our many sins, when the tradition of the parents is very, very weak, and it is common that children do not live in the same place as their parents at all; and especially those who women who learn texts and language of the non-Jews, it is certainly a tremendous mitzvah to teach them Torah, prophets, writings, and the ethical works of the rabbis…

In this obscure footnote, written after World War I (1921 or 22, as demonstrated by Rachel and Charles Manekin), the Chofetz Chaim overturns centuries of tradition and the rulings of the Shulhan Arukh and Maimonides because “times have changed.”

But this radical ruling was already not so radical. There were already many schools for Jewish women already established in Europe. In 1922, Agudat haRabbanim of Poland issued a call to educate girls.

Times had certainly changed. It was a new world. And called for rabbis brave enough to recognize the new reality and update the halakha accordingly. It was a pivotal moment.

In the century since the Chofetz Chaim’s ruling, the world has changed even more and far quicker than he or anyone could have imagined. The new challenges and opportunities are incredible.

Just as October 14, 1066 was a pivotal moment in the history of England, when the earls and thegns had to pick a side and hope they would emerge victorious, so too the modern era forces us to make decisions today which can continue to have an unfathomable impact for centuries to come.