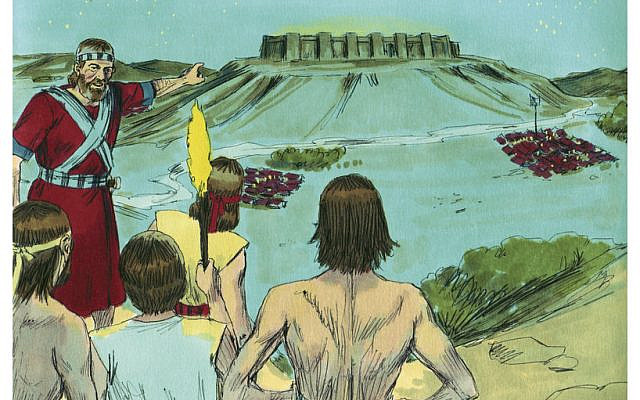 From Moshe Rabbeinu leading us out of Egypt to David Ben-Gurion declaring independence for the State of Israel, we have had leaders of many different calibers, all of whom fought in the interest of Bnei Yisrael. Leadership is at the crux of a nation’s success and direction, ensuring that its people are led where they need to be going. In today’s time, when we find world leaders who are corrupt, abusive, and crude — all in their own levels and fashions — it is important that we, the Jewish People, revisit some of the ideals of a leader, lest we find our vision clouded by the fictitious virtues many parade along their chests.

Previously, Hashem told Moshe and Aharon that they would not lead Bnei Yisrael into Eretz Yisrael (The Land of Israel), and in Parshat Pinchas, He tells them who will. The Torah says, “And the LORD answered Moses, ‘Single out Yehoshua son of Nun, a man of ruach (spirit), and lay your hand upon him’” (Bamidbar 27:18).

It’s especially notable that Hashem highlights Yehoshua as “a man of ruach,” and many commentaries understand very profound and powerful insights from this. Rashi comments that “a man of ruach” refers to one who is able to deal with and relate to the character of each and every person. This is vital to any leader’s success, as connecting to the people one is leading and was chosen to represent ensures one does so efficiently.

Taking this pasuk a level deeper, Rav Nachman of Breslov writes in Likutei Moharan that Bnei Yisrael’s leaders are like the “concept” of ruach, analogous to wind that can extinguish or ignite a candle. These leaders, Rav Nachman explains, must blow their ruach on each individual and blow away the ash — the crippling depression and sadness — that prevents a Jew from being inflamed with love and passion for Hashem. In doing so, the components of fire in each Jew will reunite, and Bnei Yisrael can unite as one nation and become the heart of the world, the heart that keeps the entire world alive and thriving; like a universal body, Bnei Yisrael acting as the world’s heart allows every nation to assume its unique role (Part II, 9:1, 3-7).

In Rav Nachman’s view, a Jewish leader — who is similar to ruach (wind) — must use their influence to uplift and inspire the people, allowing them to burn like a candle of the Divine. In doing so, each Jew will be able to more strongly unify to forge a united Bnei Yisrael; then, what began as leading on an individual scale will translate to a national scale, ultimately allowing the Jewish People to serve humanity as the heart of the world. This is a much stronger perspective on what a “man of ruach” actually is and paints a marvelous picture of leadership in its ideal form.

Identifying a different attribute in the pasuk’s mention ruach, the Netziv says in Haamek Davar that Yehoshua had his own independent views, absent of undue influence for the pleasure of himself or others. Here, ideal leadership accepts another important principle: A leader must be “the real deal.” There should not be an inkling of political semantics and technical corruption that dictate a leader’s beliefs and direction in leading their people.

Genuine leaders are hard to come by — in any capacity. However, we must ask ourselves, what values are do we demand of our leaders, whether they be national or communal? Of course, perfection is an unrealistic expectation, but the poor quality of our leaders should never be discounted or accepted; a leader of ruach is the ideal our leaders must strive for.