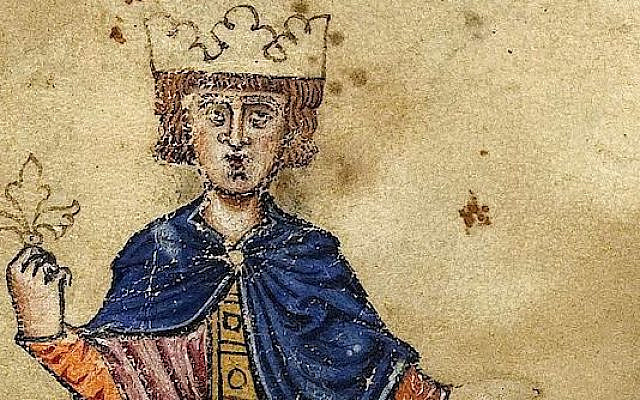 Frederick II of Hohenstaufen stood at the crossroads of the Middle Ages and the Renaissance and his court was also a bridge between the east and west.

He held many titles, including King of Sicily from 1198, when he was only four years old, King of Germany from 1212, Holy Roman Emperor and King of Italy from 1220, and King of Jerusalem from 1225. He held these titles until his death in 1250, despite being excommunicated by two different popes and being branded as the Antichrist by Pope Gregory IX.

His father, Henry VI, died when Frederick was only three years old. His mother died two years later, after returning to Sicily and putting him under the protection of Pope Innocent III.

He fought several battles with his uncle, Otto of Brunswick, until he finally gained control over most of Italy and modern day Switzerland, Belgium, the Netherlands, Austria and Czech Republic. He waged political war with the popes who wanted greater power and did not like being hemmed in by his lands. He also staved off the Mongols who, led by Batu Kahn, began raiding at the edge of his empire, but eventually they retreated before he had to go to war.

The first time he was excommunicated was in 1227, because he fell ill with the plague as he was about to embark on the Sixth Crusade. However, some contemporaries thought his illness was faked to avoid carrying out his pledge. Roger of Wendover wrote:

… he went to the Mediterranean sea, and embarked with a small retinue; but after pretending to make for the holy land for three days, he said that he was seized with a sudden illness… this conduct of the Emperor redounded much to his disgrace, and to the injury of the whole business of the crusade.

Pope Gregory IX excommunicated him for delaying his vow to conquer Jerusalem. 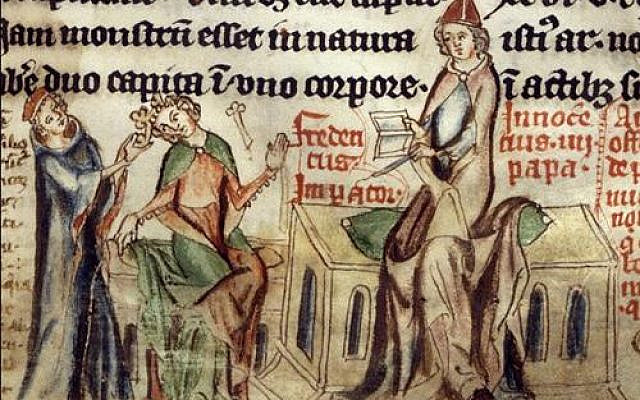 But a year later, in 1228, Frederick set out and became King of Jerusalem without any bloodshed. He did this through a combination of marrying (by proxy) Isabella II of Jerusalem, daughter of John of Brienne, and by making a deal with the Sultan of Egypt, al-Malik al-Kamil.

Al-Kamil’s uncle was Saladin, the caliph who had recaptured Jerusalem from crusaders in 1187. The treaty al-Kamil signed in February 1229 gave Frederick dominion over Jerusalem, Nazareth and Bethlehem, as well as a small coastal strip. In return, he agreed that the Dome of the Rock and al-Aqsa Mosque would remain under Muslim rule, and that he would not build any fortifications in Jerusalem. 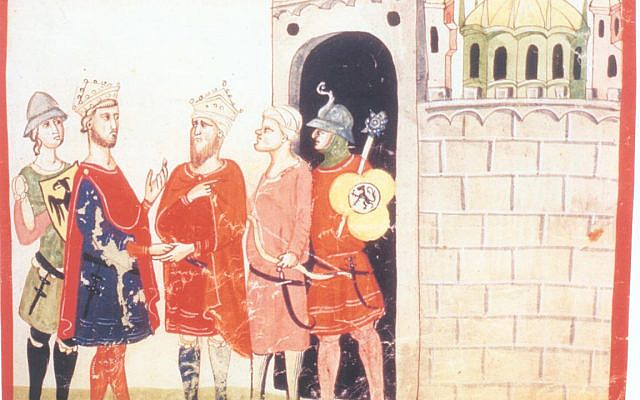 Pope Gregory IX excommunicated him a second time for going on a crusade while under excommunication.

Frederick was later excommunicated by Innocent IV in 1245 at the First Council of Lyon.

In Dante’s Inferno (Circle 6: Canto 9-10) Frederick is listed among the heretics:

The arch-heretics are here, accompanied By every sect their followers; and much more… Within is Frederick, second of that name…

Maybe the main reason that Frederick was excommunicated was not because of his theological failings, but due to the pontiff’s dislike of the Greek philosophy and wisdom that pervaded Frederick’s court. Introducing Arabic and Greek science and philosophy to the west was perhaps Frederick’s most long-lasting accomplishment.

In 1224 he founded the Naples University, the first secular university in Europe. Frederick awarded scholarships to students who wished to study there, and in return they became his civil servants.

Italian was a relatively young language at the time, and the poetry written by the Sicilian School in Frederick’s court in Palermo had a big influence on the modern language.

The Emperor himself spoke six languages, and he gave the first official speech in German.

Frederick was also the first, and possibly the only, Medieval European ruler to write a scientific work, publishing a book on falconry based on his studies and expertise in the field. 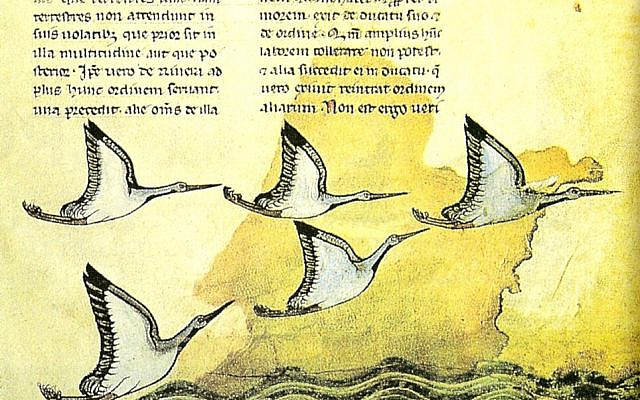 Reliance on Aristotle without testing his ideas is one of the reasons Europe was so far behind the Arabic-speaking world for so many hundreds of years. Frederick’s willingness to challenge and reject Aristotle based on experimental evidence is the first beginnings of the modern scientific method.

Frederick posed a series of philosophical and theological questions that were answered by the sufi philosopher Ibn Sab’in in a book entitled “The Sicilian Questions.” 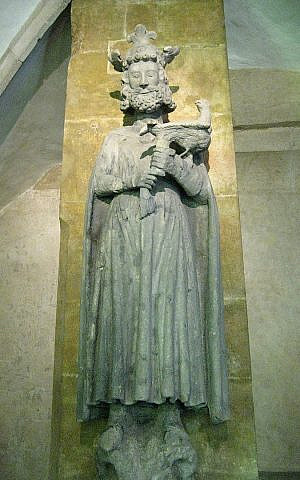 Frederick oversaw the Constitutions of Melfi which formed the basis of Sicilian law for the next 600 years. Among its many laws are the requirement that medical students pass their exams and gain practical experience before they begin working as doctors, outlawing trial by duel, and codifying the equality of all citizens before the law. He made clergy subject to civil law and banned them from judging heretics.

The Constitutions also introduced standardized weights and measures, which allowed trade and business across the continent.

Frederick’s court also included many men of science. He had at least two intellectuals holding the official position of court philosopher.

The biggest influence on Frederick’s scientific and philosophical thought was a Scotsman named Michael Scot. Charles H. Haskins wrote that, “His official position was that of court astrologer, but he… busied himself with a series of writings on astrology, meteorology and physiognomy, all dedicated to Frederick.”

His court was also home to Theodore of Antioch, a Syrian philosopher, doctor and translator, who may have been of Jewish origin. 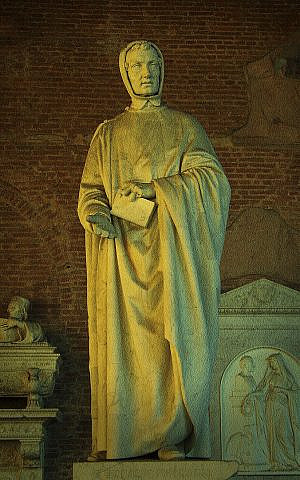 Frederick was a patron of Leonardo of Pisa, better known as Fibonacci, who introduced to Europe the Indo-Arabic numerals and mathematical principles that we still use today. Fibonacci dedicated his Liber quadratorum (The Book of Squares) to the Emperor.

Jacob ben Abba Mari ben Shimshon Anatoli, a French Jew who was the son-in-law of Samuel ibn Tibon, was invited by Frederick to Naples. Like ibn Tibon, who translated Maimonides’ “Guide for the Perplexed” from Arabic to Hebrew, Jacob was a translator who held Maimonides and his thought in high esteem. In his book “Malmad” Jacob often mentions the king, and the wisdom he learned from his court, mentioning Michael Scot explicitly.

Due to his wide-ranging interests in science, philosophy, theology and zoology, Frederick was dubbed by his contemporaries, stupor mundi, “the wonder of the world.”

But some of the experiments Frederick carried out were nevertheless barbaric.

He once enclosed a man inside a barrel and left him to starve to death. He wanted to discover if the human soul was visible as it left the body, so he closely observed a small hole in the barrel as the man was dying.

He once fed two men identical meals, then had one lie down to rest and sent the other out to hunt. Then he killed and dissected them both, to see how their activities affected their digestion.

In another experiment Frederick tried to prove that Hebrew was the original language of creation, and the natural language of children if left untaught.*

Salimbene di Adam recorded the result in his book, The Twelve Calamities of Emperor Frederick II:

Like Psammetichus in Herodotus, he made linguistic experiments on the vile bodies of hapless infants, bidding foster-mothers and nurses to suckle and bathe and wash the chidren, but in no wise to prattle or speak with them; for he would have learnt whether they would speak the Hebrew language (which had been the first), or Greek, or Latin, or Arabic, or perchance the tongue of their parents of whom they had been born. But he laboured in vain, for the children could not live without clappings of the hands, and gestures, and gladness of countenance, and blandishments.

Being raised without speech literally killed the children. Instead of proving that Hebrew was the natural language, Frederick demonstrated that silence can be fatal.

And here is where I make the very tenuous leap to this week’s Torah reading.

In Parshat Shemini, the Torah describes how on the very day that the Tabernacle was inaugurated and Aharon took office as High Priest, his two eldest sons, Nadav and Avihu, were killed by God. Leviticus 10:2-3 describes the event:

A fire came out from before God and consumed them, and they died before God. Moses said to Aharon, ‘This is what God referred to when He said, “I will be sanctified with those close to me and will be honored before all the people.” And Aharon was silent.

Aharon responded to the tragic loss of his two sons, who embodied all his hopes, expectations and future, with silence.

The Talmud (Zevachim 115b) says that Aharon was rewarded for his silence. For sometimes there is nothing to say. Complaints or justifications or explanations would have been both wrong and futile. Aharon’s silence signified his acceptance of God’s actions.

Death is the ultimate silence. Dumah is the angel of both silence and death (Sanhedrin 94a).

We symbolically serve foods that have no “mouth” – like eggs or bagels — to a mourner, to symbolize that there is nothing to be said.

How many times have I been to a house of mourning where there was nothing to say, and we just sat in silence, contemplating the loss?

But sometimes it is difficult for those around to cope with a mourner’s silence. People are often nervous to visit someone who was recently bereaved because they “don’t know what to say.”

Of course they don’t know what to say. There is nothing to say. In the moment of tragedy, it is too soon to offer words of explanation or to try and mitigate the loss. This is one of the lessons of the Book of Job, whose friends couldn’t stop talking for dozens of chapters, when what was really needed was simply their comforting silence.

When tragedy strikes a person, or even the entire globe, emulating Aharon and responding with silence is often the best or only response.

However, it is also important to remember the lesson of the children Frederick killed with silence. Now, more than ever, when people are enclosed within their homes and unable to interact directly with others, it is important, and potentially lifesaving, to reach out and speak to those suffering from the silence.

So many of us are using modern technology to reconnect with people we were rarely in contact with before or make special efforts to contact those who are alone.

We all miss our normal societal interactions. We all need the comfort of others. We don’t need explanations or complaints about what is going on. That is the lesson of Aharon. But we need to hear others, that is the lesson of Frederick’s poor children.

* James IV of Scotland also reportedly tried a similar experiment, which was allegedly successful (though even the contemporary record is skeptical). According to The Cronicles of Scotland (Volume 1 p. 250):

The king also caused tak one dumb woman, and pat her in Inchkeith, and gave hir two bairnes with hir, and gart furnisch hir in all necessares thingis perteaning to their nourischment, desiring heirby to knaw quhat languages they had when they cam to the aige of perfyte speech. Some says they spak guid Hebrew, but I knaw not by anthoris rehearse, etc.