Alexander Sergeyevich Pushkin is considered to be Russia’s greatest poet and the founder of modern Russian literature. His Mozart and Salieri was the basis for the movie Amadeus. Modest Mussorgsky’s opera Boris Godunov was based on a Pushkin play. He augmented the Russian language, adding new words where he needed them, and developing and adapting the language to suit his medium.

Most of his works are unknown to the English-speaking audience. Because of their complexity few of his works have been translated. However, virtually all Russian speakers know his writings.

However, I want to focus not on Pushkin, but on his great-grandfather, a man named Abram Petrovich Gannibal.

Gannibal was born in Africa, most likely on the shores of Lake Chad in modern-day Cameroon, in about 1698. After his father was killed trying to defend his territory from the Ottomans, Gannibal was abducted and taken to Constantinople. For about a year or so he was a slave to Sultan Ahmed III, but in 1704 he was purchased by Pyotr Andreyevich Tolstoy (grandfather of Leo Tolstoy) and brought to Russia, to serve in the court of Peter the Great. 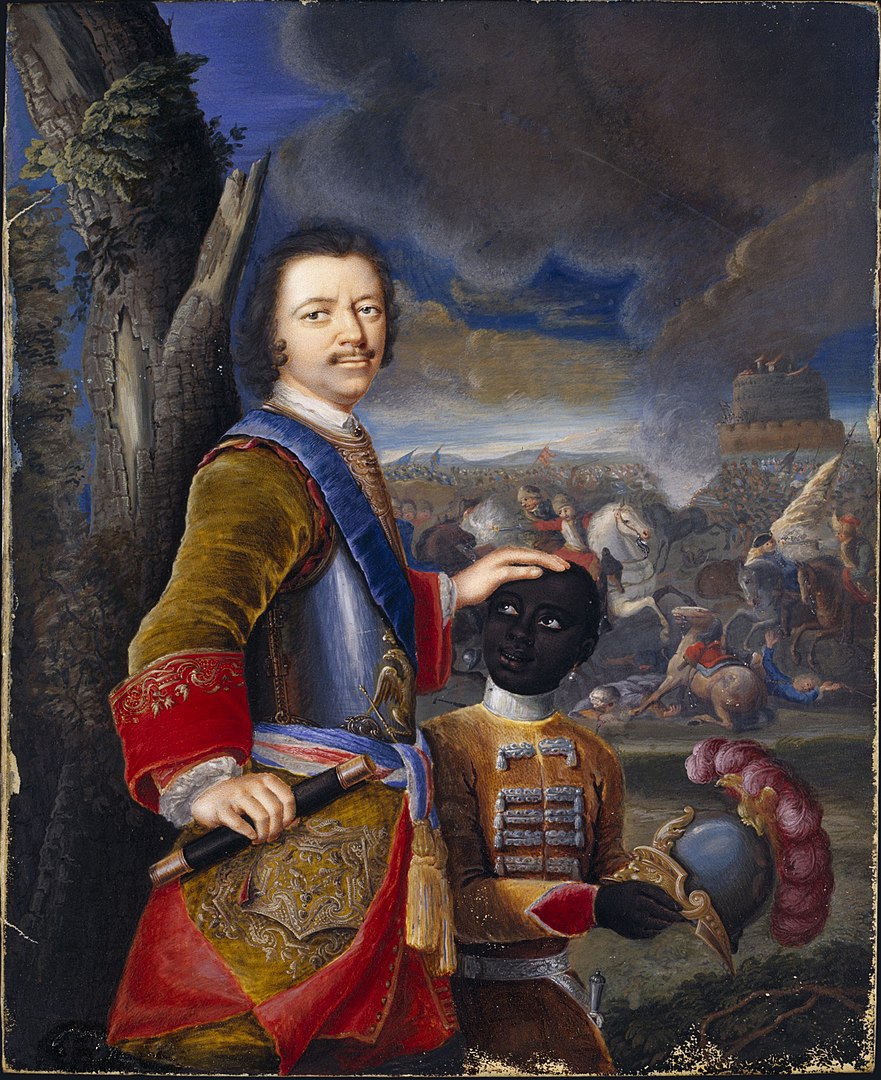 Painting of Peter the Great of Russia with his valet, by Baron Gustav von Mardefeld. (Public Domain/ Wikimedia Commons)

Peter was fond of the young boy, and a year later had him baptised, becoming Gannibal’s godfather in the process. Gannibal was equally fond of Peter, and of his daughter Elizabeth. He would travel alongside Peter and serve as his valet when the emperor went on military campaigns.

Gannibal was extremely smart and a quick learner. By the age of 19 he was fluent in several languages and very good at mathematics and geometry. He was sent by Peter to Metz to continue his studies. While there he also enrolled in the French army to learn military engineering. He fought for the French against Spain and was captured in battle, but released in 1722.

While in France he adopted the name Gannibal, in honor of the Carthigenian general Hannibal. He also spent time with many Enlightenment figures including Voltaire, who referred to Gannibal as the “dark star of the Enlightenment.”

Gannibal completed his studies and returned to Russia, but in 1725 Peter the Great died. His successor, Prince Menshikov, jealous of his education and suspicious of the foreigner, exiled Gannibal to Siberia in 1727 where he remained until 1733. During that time he completed many construction projects and became a master engineer. 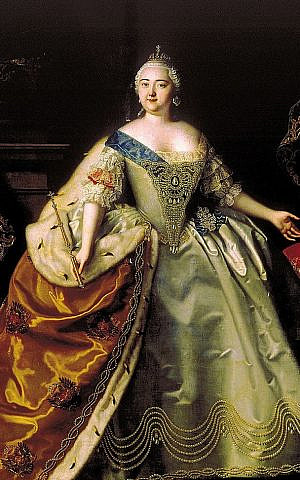 When Elizabeth ascended the throne in 1741, Gannibal, then aged about 43, became a member of her court. She appointed him superintendent of Reval and he rose to the rank of major general. She gave him the Mikhailovskoye estate, with hundreds of serfs, where he eventually retired in 1762.

He drew up a coat of arms for himself which had an elephant and the letters FVMMO on it. Some have suggested the letters are the word “homeland” in the language he spoke as a very young child in Africa; however, another possibility is that it is an acronym for Fortuna Vitam Meam Mutavit Omnino which means “Fortune has changed my life entirely.

Gannibal married twice. He long suspected his first wife, Evdokia Dioper, of being unfaithful to him — which was confirmed when she gave birth to a white daughter. The two divorced and she was jailed for 11 years, then sent to a convent. 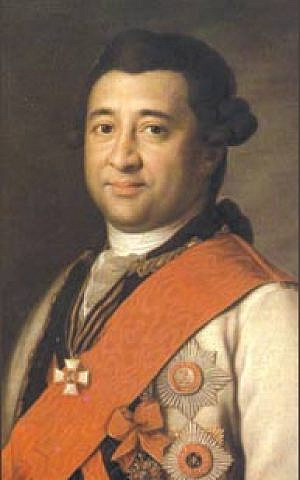 Gannibal’s second wife, Christina Regina Siöberg, was descended from noble Scandinavian and German families. They had 10 children, and their descendants include not only Pushkin, but British nobles Sacha Hamilton, Duchess of Abercorn and her younger sister Natalia Grosvenor, Duchess of Westminster. Queen Elizabeth II’s cousin George Mountbatten, 4th Marquess of Milford Haven Is also a direct descendant of Gannibal.

Pushkin’s first work of prose was a historical novel loosely based on the life of his great-grandfather entitled The Moor of Peter the Great.

It is remarkable to think of how much a foreigner, marked as an outsider by the color of his skin and raised as a slave in the house of the Russian monarchy, managed to accomplish, and the heights to which he rose.

The Torah tells us very little of Moses’ upbringing in the Egyptian royal court. Within a few verses (Exodus 2:10-15) he goes from being weaned to fleeing for his life.

The boy grew, she brought him to Pharaoh’s daughter, and he became her son. She called his name Moses, and said, ‘For I drew him from the water.’

And it was in those days that Moses grew and he went out to his brethren and saw their affliction. He saw an Egyptian man whipping one of his brothers, a Hebrew man. He turned this way and that and saw that there was no one. He smote the Egyptian and buried him in the sand… Pharaoh heard of this matter and wanted to kill Moses. So Moses fled from before Pharaoh and dwelt in the land of Midian, where he sat near the well.

Is it reasonable for us to assume that as the adopted grandson of Pharaoh, during the first 40 years of his life, he would have received the best education and military training possible? Would Pharaoh have encouraged him to become a leader and a potential future ruler?

Such training would have proved valuable to Moses in the last 40 years of his life when he led the Israelites from bondage in Egypt to freedom on the doorstep of the land of Israel. And from the stories in the Torah we see that Moses was a tremendous leader, who was able to unify the people, calm their fears, atone for their sins, and fearlessly confront enemies from without and within.

Moses had unknowingly been raised almost from birth for the task of leading the children of Israel to the Promised Land.

Yet when Moses first encounters God at the burning bush (Exodus 3:11), he feigns ineptitude.

God spends an entire chapter (and according to Rashi, a whole week) proving Himself to Moses and convincing the 80-year-old to become the leader of the Hebrew. Yet Moses argues back, saying (Exodus 4:10):

‘My God, I am not a man of words, not today, nor yesterday, nor two days ago, nor since You first spoke to Your servant. For I am of mouth and tongue that are heavy.’

This is the man who only a few months later would stand on Mount Sinai and instruct the nation, the man who was not at a loss for words when confronted by Korah and his congregation, who stood on the bank of the Jordan river and delivered the entire book of Deuteronomy over the course of five weeks.

So why did Moses refuse so adamantly to go and speak to Pharaoh?

Perhaps he feared that the people were not worthy of being saved. Maybe, despite God’s repeated assurances, Moses had already given up on his own nation.

A leader can only lead if he believes in the people and they believe in him. The last time Moses saw an Israelite slave, he was betrayed by him to Pharaoh and forced to flee. Maybe Moses felt that such slaves could never become free.

Over and over again Moses argues with God saying that the people won’t listen to him. And with one miracle after another God shows Moses that he is wrong in his assessment. Yet at the end of the day, Moses feels unable to go on his own because despite his belief in God, he cannot trust the nation.

Here is Aharon, your brother, the Levite. I know that he will certainly speak… You will speak to him and put the words in his mouth, and I will be with your mouth and with his mouth and I will teach you what to do.

Whereas Moses was seen by the people as an outsider, Aharon was one of them. We don’t know if Moses even knew Aharon, and presumably had not seen him in decades. But Aharon knew the people well. According to the Mishna (Avot 1:12) he was a lover of peace, a pursuer of peace, who loved people and brought them close to Torah.

Aharon was someone who believed in the good inherent within people. Whereas Moses, as exiled leader, was apart from the nation, Aharon was one of them.

Abram Petrovich Gannibal was accepted into Russian society despite his differences. When he stood at the burning bush, Moses was not yet accepted as one of the Israelites. He didn’t fully trust the people and they didn’t fully believe in him. (They only believed in Moses after the splitting of the sea, in Exodus 14:31).

That’s the difficulty of being an outsider, raised to be a leader in the palace.