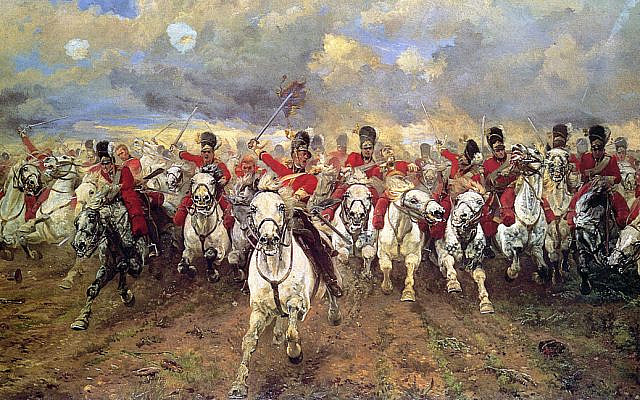 "Scotland Forever!" (1881) by Lady Butler depicting the cavalry charge of the Royal Scots Greys at the Battle of Waterloo in 1815. (Public domain/ Wikimedia Commons)

Nowadays, we take horsepower for granted. We use it as a measurement of power, forgetting that it actually compares the output of horses to that of the engines that would replace them.

And we also forget how the domestication of horses revolutionized the world. Perhaps nowhere more so than in the field of battle.

John Frederick Charles Fuller, known as Boney to his friends, was one of the top British military strategists between World War I and World War II. He wrote about how much horses had changed the nature of warfare.

The introduction of the horse, in about 2000 BC, not only completely revolutionized this primitive warfare but also the character of war itself.

First, it radically changed the supply system of armies, for the horse can carry or haul far more than a man, and what is even more important, unlike man, it can normally live off the country. The first great change was, therefore, the extension of the range of action of armies.

Secondly, by using the chariot as a means of human conveyance, it enabled troops to be brought in a state of freshness onto the battlefield and massed at tactically advantageous points.

Thirdly, when the horse was used to mount the soldier upon – which took place long after chariots were introduced – an arm was created which could operate either independently of or in co-operation with infantry and which eventually evolved into two main types, heavy cavalry for shock action and light for reconnaissance and pursuit…

In all this the point to note is that the adoption of the horse led to the development of a totally different army – a horse-powered in place of a man-powered organization.

However, Fuller also realized that tanks and other machines, could replace horses on the battlefield. He was one of the earliest military strategists to recognize how radically an armored unit could change the nature of warfare.

With the introduction of the internal combustion engine, which could supplement or replace horsepower by mechanical power of a vastly higher ration, the same evolution was to be expected.

But change takes a long time. And tanks, which were first invented in 1915, did not completely replace cavalry for decades. In fact, the last successful horse-mounted battle was the Battle of Schoenfeld, in 1945, when the Polish cavalry overran the German defenses, forcing them to withdraw. 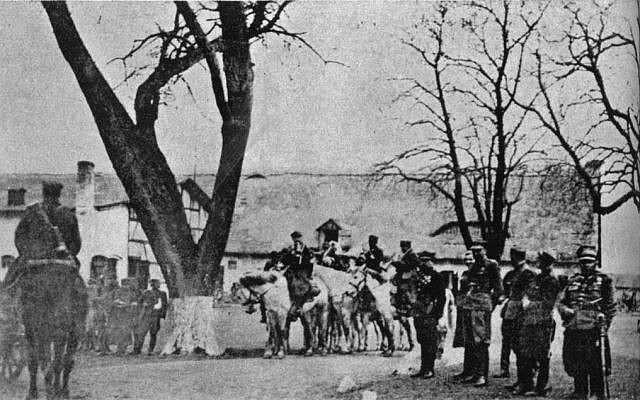 Polish Cavalry Brigade in March 1945, after the Battle of Schoenfeld. (Public domain, Raymond Kuliński and published by Polish Ministry of Defence, Wikimedia Commons)

Fuller saw the potential of tanks. He encouraged the British army to give up its horses for an armored corp. But he faced a lot of opposition. Many of the military leadership considered horsemen to be more noble and intelligent than mere mechanics operating combustion engines. 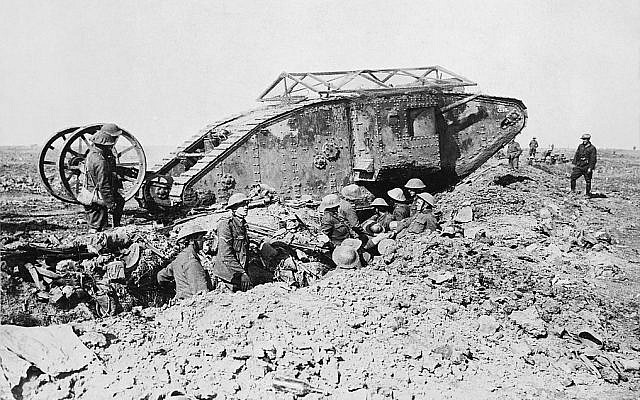 Ultimately, by the time World War II began, the British army had made a considerable transition to tanks over cavalry – largely due to the scarcity of horses after World War I, where millions of animals served and died. However, to a certain extent, horses and their riders retained their stature – even today, the British army has more horses than tanks.

Fuller was a brilliant military strategist. He devised “Plan 1919” which sought to reshape modern warfare. Instead of confronting the enemy head-on, he argued that a tank unit should advance rapidly to the rear of the enemy and destroy supply lines and command centers. However, he also understood the importance of confusion and chaos, and argued that communications should not be destroyed.

“… every available bombing machine should concentrate on the various supply and road centers. The signal communication should not be destroyed, for it is important that the confusion resulting from the dual attack carried out by the Medium D tanks and airplanes should be circulated by the enemy. Bad news confuses, confusion stimulates panic … (then) a carefully mounted artillery, tank and infantry attack should be launched, the objective of which is the zone of the enemy’s guns: namely the secondary tactical zone some 10,000 yards deep.” 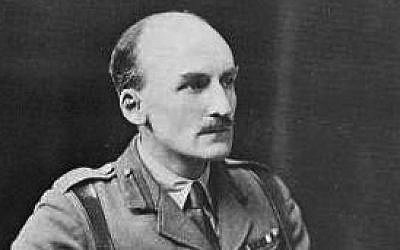 However, despite Fuller’s brilliance, the British army never implemented his plan, largely because, as the name suggests, World War I was over before the plan was finalized.

Fuller’s military insights were ahead of their time. His “Nine Principles of War” formed the basis of war since the 1930s. But he was not an easy person to work with, and not popular with the military. He was eventually sidelined by the army after refusing the posts he was offered.

He also had some very strange ideas. He was a stalwart follower of occultist Aleister Crowley. Fuller was a prolific writer, and his books that did not deal with military strategy were about magic, kabbalah and other mystical topics.

Fuller was also a fascist. After leaving the army in 1933, Fuller joined the British fascist movement, headed by Sir Oswald Mosley. He was also a member of the far-right Nordic League.

But his most infamous moment occurred in 1935, when he was the only foreigner to view the German first armed maneuvers. Ironically for a British officer, Fuller was a huge admirer of Adolph Hitler. On April 1939, Fuller was an honored guest at Hitler’s 50th birthday parade, watching as “for three hours a completely mechanized and motorized army roared past the Führer.” Afterwards, Hitler asked, “I hope you were pleased with your children?” Fuller replied, “Your Excellency, they have grown up so quickly that I no longer recognize them.”

It was the Germans, not the British, who adopted Fuller’s plan of a lightning attack on supply lines, better-known to us as Blitzkrieg.

Because of the military restrictions imposed by the Treaty of Versailles at the end of World War I, Hitler was able to build a new army using the latest technology and tactics. The British, with centuries of tradition and expertise, were unwilling and unable to adapt to the advances of the 20th century.

Parshat Shoftim includes the mitzvah of appointing a king over Israel. However, the Torah gives specific limitations to what he may do. Including a prohibition in having too many horses.

But he shall not have too many horses for himself and not return the people to Egypt to gain more horses. For God said to you, ‘Do not ever return this way again.’

Rashi explains, based on the plain reading of the verse, that the prohibition against having too many horses is part of a larger prohibition on returning to Egypt. Having left that country once, a king should not embark on a plan that would require him to send his subjects back to Pharaoh’s rule.

However, Ramban explains that the prohibition is that the king should not come to rely upon his horses – his military superiority – but must always remember that it is only reliance on God that ensures victory.

Extending the Ramban’s message, we can understand that the prohibition of having too many horses is also a warning against becoming a victim of our own past and being unwilling to adapt and change.

A king who has won battles with superior cavalry numbers may be unwilling to consider alternate military strategies. And he may continue to be successful and win wars right up until the point in time that the enemy manages to develop a new, better, strategy. 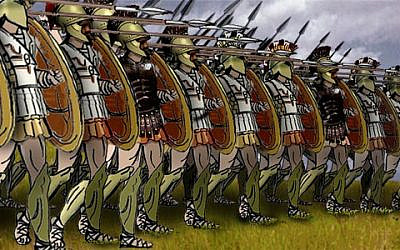 A modern illustration of the Greek hoplites marching in a phalanx formation. (Public domain/ Wikimedia Commons)

In 490 BCE, at the Battle of Marathon, the Greeks defeated Darius’s Persian army using their phalanx technique.

The Greeks continued to use the phalanx as their main strategy, ultimately coming to conquer a large part of the known world.

However, the Romans developed more flexible tactics, with only the last of the three-line Roman legion using a modified form of the phalanx, And in adapting and improving on the tactics of the Greeks, the Romans conquered much of the former Greek empire. Had the Greeks been able to adapt, rather than rely on the strategy that had worked so well for them for centuries, perhaps the Romans would never have defeated them.

What is true for a king and the military is also true for us as individuals and as a society. It is very tempting to rely on the strategies and technologies that have served us well in the past. And they may continue to be the best option for the present. But at some point in the future there will be new ideas and better technology. If we are unable to adapt, we will fall by the wayside. It is impossible to predict the future. But if we never consider our options and reconsider our choices, we will be overtaken by those willing and able to change.

Though the roots of future warfare are hidden in the past, the plant of war must be cultivated creatively. No stereotyped copying is likely to succeed. Victory is to be sought in the imagination.

This blog was inspired and informed by Tim Harford’s “Cautionary Tales” podcast. I highly recommend it. He speaks about Fuller and the difficulty of change in “How Britain Invented, Then Ignored, Blitzkrieg.”

Beginning on August 24th, I will give a new, two-part online series of classes at WebYeshiva about The Ten Martyrs which are mentioned in the Yom Kippur mussaf service. You can listen to the live or recorded Torah classes on WebYeshiva. I’ve also started sharing more of my Torah thoughts on Facebook. Follow my page, Rabbi Sedley.