This week the UAE allowed its citizens access to Israeli websites, including The Times of Israel as part of a process that will lead to full normalization of relations between Israel and the Emirates. So, this week I wrote about Ahmad ibn Majid, the most famous seafarer and navigator from that country.

Ibn Majid was born in Julfar, which today is Ras Al Khaimah, the capital of the Emirate with the same name probably in 1432. His father and grandfather were mu’allim – master navigators. From an early age, ibn Majid spent his days on ships. He became the greatest expert on currents, winds, harbors, stars and navigation. He wrote 38 compositions, including poems.

His most famous book was Kitab al-Fawa’id fi Usul ‘Ilm al-Bahr wa ’l-Qawa’id (Book of Useful Information on the Principles and Rules of Navigation) written in 1490. It is an encyclopedia of history and principles of navigation. Among other topics, it lays out the differences between coastal sailing and the open seas. It describes the locations of ports from East Africa to Indonesia. It teaches about monsoons and seasonal weather disruptions.

He described local peculiarities, for example, of sailing in the difficult Red Sea with its prevailing north winds. He also explained how to navigate the China Sea, and the difficulties of sailing south of the equator where the monsoon winds gave way to the trade winds.

The 15th century was a pivotal time in the history of sailing. The fixed rudder, invented in China in the year 1,000, reached the Arabian Peninsula a couple of hundred years later. The Arabic triangular lateen sail allowed boats to travel almost directly into the wind. The Portuguese and Spanish would later add the lateen sail with their square-rigged ships, which ultimately led to their conquests of Asia and the Americas. 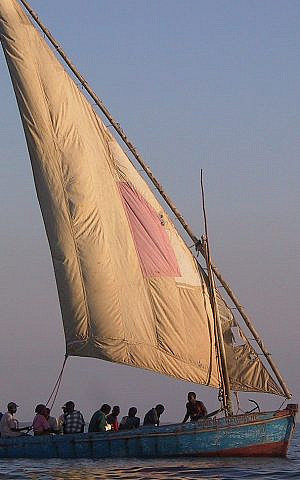 Dhow with lateen sail in “bad tack” with the sail pressing against the mast, in Mozambique. (CC BY-SA, Steven G. Johnson/ Wikimedia Commons)

Navigation was enhanced by a new method of using the Pole Star to determine latitude. This was often calculated with the aid of a kamal, a wooden rectangle attached to a piece of string with knots used to measure height of the Pole Star. Improvements to the astrolabe and compass, allowed sailors to go further than ever before. It is a mark of ibn Majid’s importance in the Arabic world that the invention of the compass is often attributed to him – even though it was actually invented several hundred years earlier.

With the new technology and knowledge, Muslim sailors were able to travel from Arabia to China, India, Indonesia and even as far as Brazil. This opened up previously unknown trade routes. Ibn Majid’s preeminence as a sailor earned him the nicknames “The Lion of the Sea” and “The Shooting Star.”

But in Europe he became known as the “First Arab Seaman,” because of his reported role in Portuguese Vasco da Gama’s first trip to the east.

Muslim and Chinese seafarers were far more knowledgeable about the sea and the world than their European counterparts. As Giancarlo Casale wrote in The Ottoman Age of Exploration.

During the first half of the fifteenth century, a time when Muslim merchants could travel virtually unobstructed from Morocco to Southeast Asia, and navigators from Ming China could boast of enormous naval expeditions reaching as far west as Hormuz, Aden, and Mombasa, Western Europeans remained almost totally confined, both physically and intellectually, to a small slice of the world bounded by the North Atlantic and the Mediterranean.

Da Gama was the first European to sail to India. Before him, Europeans had been gradually exploring further and further south along the west coast of Africa. But it was not until 1488 that Bartolomeu Dias succeeded in rounding the Cape of Good Hope. 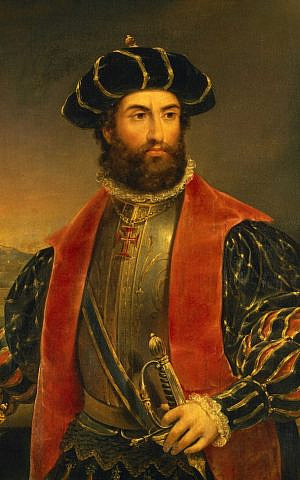 On July 8, 1497, da Gama left Lisbon with a fleet of four ships and a crew of 170 men. He sailed around the southern-most tip of Africa on December 16. By April 14, 1498, the Portuguese ships reached Malindi in modern-day Kenya. There, according to a traditional story, he engaged ibn Majid to pilot him to Calicut, on India’s southwest coast (though other versions say that the pilot was a Christian or Gujarati). Da Gama left for India on April 24, 1498 and reached the subcontinent on May 20.

This first trip itself was not a huge success – the Indian leaders and merchants were unimpressed with the goods da Gama brought to barter, so he left almost empty-handed. And the journey home took him exactly a year. Only two of the four ships made it back to Lisbon, and only 55 of the 170 men. But it opened up the spice trade to Europeans. It did not take long until King Manuel sent the newly promoted da Gama back to India where he and his fellow sailors carried out massacres and committed many barbaric acts against the local inhabitants and Muslim traders.

Da Gama was responsible for Portugal becoming a colonizing power and violently conquering large areas of the world. He did this in order to expand the borders of Portugal far beyond Europe and across the sea.

A prohibition against expanding borders is mentioned in this week’s Torah portion of Shoftim. In Deuteronomy 19:14 the verse states:

Do not move the eternal boundary that your ancestors made

Do not move the eternal boundary, and do not encroach on the fields of orphans

Furthermore, the prophet Hosea (5:10), berated the kings of Judah in God’s name, comparing them to those who try to grab land from others:

The princes of Judah are like those who move the boundaries, I will pour My wrath out on them like water.

The Torah stresses the importance of not encroaching on property belonging to someone else. Someone who tries to grab land belonging to another transgresses a negative prohibition. Safe and secure boundaries prevent struggles and enmity between neighbors.

I’m reminded of Robert Frost’s poem “Mending Wall” which describes how the frozen winters make gaps in the boundary walls. The poem states the importance of mending the walls in order to keep good relationships with the neighbors:

I let my neighbor know beyond the hill;
And on a day we meet to walk the line
And set the wall between us once again.
We keep the wall between us as we go…
He will not go behind his father’s saying,
And he likes having thought of it so well
He says again, ‘Good fences make good neighbors.’

The rabbis (Midrash Tanuchuma, Shoftim 18) learned from a verse in this week’s Torah reading that:

See how great is peace, because God said that even with enemies one should reach out first for peace. And our rabbis taught that we must inquire about the peace of non-Jewish nations because of the ways of peace.

Strong, secure borders allow for long lasting peace which can be extended far and wide. May the skill, knowledge and technology exhibited by ibn Majid ultimately be used solely for the sake of good relations between neighbors.

I’ve started sharing more of my Torah thoughts on Facebook. Follow my page, Rabbi Sedley. This week I’m beginning a new four-part series at WebYeshiva. You can listen to the live or recorded Torah classes by registering on the website.