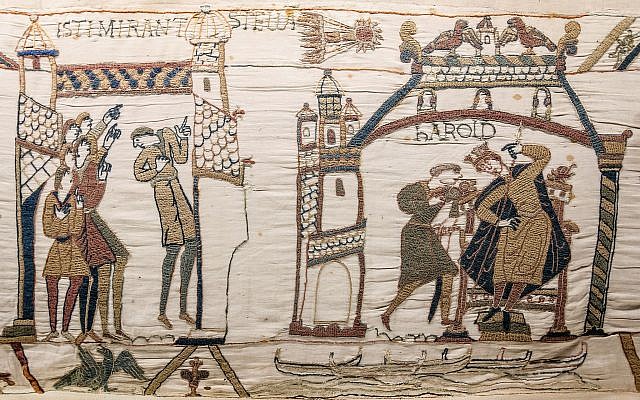 The Bayeux tapestry, depicting the victory of the invading Normans over the English in 1066, clearly shows Halley’s comet (though looking more like an uprooted flying sunflower) above a cowering King Harold. William the Conqueror saw the comet as an omen that would guarantee his success and only set off with his troops from the French coast for the fateful October 14 battle after seeing the sign in the sky.

Presumably Harold also saw the strange light in the sky as a portent of his victory, but clearly, he was mistaken since he ended up with an arrow in his eye instead.

Eilmer of Malmesbury, an English monk and astrologer, recognized the real meaning of the comet from his country’s perspective (though this was only recorded many years later, by William of Malmesbury in about 1125):

“You’ve come, have you? … You’ve come, you source of tears to many mothers, you evil. I hate you! It is long since I saw you; but as I see you now you are much more terrible, for I see you brandishing the downfall of my country. I hate you!”

The comet is named for Edmond Halley because in a book published in 1705 (“Synopsis of the Astronomy of Comets”), he was the first to describe the periodicity of the comet which returns regularly every 74-79 years.

The Talmud (Horayot 10a) states that Rabbi Yehoshua ben Hananiah, the first century mishnaic sage, was aware of a “star” that returns every 70 years.

He was traveling in a boat with Rabban Gamliel but the journey took much longer than expected. Luckily, Rabbi Yehoshua had expected that there may be a delay and brought extra provisions. He explained, “There is a star that ascends every 70 years and misleads the sailors. I said, ‘Maybe it will ascend and mislead us.’”

The Babylonians hundreds of years earlier had already recorded Halley’s comet, but it is possible that Rabbi Yehoshua was the first person to note its regular return.

If it was Halley’s comet that he saw, that boat journey must have occurred when both Rabbi Yehoshua and Rabban Gamliel were in their 20s, in the year 66 CE. Many years later, when he was the political and religious leader of the Jewish community, Rabban Gamliel would publicly acknowledge Rabbi Yehoshua’s superiority in knowledge of astronomy (Rosh Hashana 25a).

Exactly 1,000 years before Harold misread the omen in the sky, certain segments of the Jewish community in Jerusalem saw that same appearance of Halley’s comet as a sign that they would be victorious if they rebelled against the Roman occupation of Judea and Jerusalem. Perhaps they saw it as similar to, “His sword drawn in his hand, stretched out over Jerusalem,” (I Divrei Hayamim 21:16).

The Great Revolt, which ultimately ended four years later with the destruction of the Second Temple, began late in 66 CE. According to Josephus, recording the view of the victorious Romans, the rebels failed to see that the comet signified their destruction.

“Thus were the miserable people persuaded by these deceivers, and such as belied God himself. While they did not attend, nor give credit to the signs that were so evident, and did so plainly foretell their future desolation. But like men infatuated, without either eyes to see, or minds to consider, did not regard the denunciations that God made to them. Thus there was a star, resembling a sword, which stood over the city: and a comet, that continued a whole year,” (“The Jewish War” Book VI; 3)

Is it possible that when he led his rebellion against the Romans some 60 years later, Shimon bar Koseva was renamed by Rabbi Akiva as Bar Kochba (Son of the Star) to send a message that he had the backing of the heavens?

In Parshat Shofetim (Devarim 18:13) there is a single verse that warns us not to look for omens or portents. “You shall be wholesome with the Lord, your God.”

Ramban explains that this means we must not look to astrologers or any other kind of soothsayer or fortune teller to know the future but must rely solely on God.

Rabbi Yehoshua was not impressed by the celestial signs. He saw the comet for what it was, a recurring natural phenomenon. And he was one of the two students – Rabbi Eliezer was the other – who accompanied Rabbi Yochanan ben Zakkai to negotiate the future of Jerusalem with Vespasian (who later became emperor, but was then just the general in charge of the troops). Rabbi Yehoshua and Rabbi Eliezer both knew the Jewish people could not rely on the heavens to save them.

Years later Rabbi Yehoshua defeated Rabbi Eliezer in a legal dispute, even though Rabbi Eliezer brought miraculous proofs, culminating in a voice emerging from Heaven, saying, “Why are you arguing with Rabbi Eliezer, for the halakha is like him in every case,” (Bava Metzia 59b).

To which Rabbi Yehoshua responded with what then became the defining characteristic of Judaism, “It is not in Heaven.”

Is it possible that after seeing the damage caused by relying on the meaning of a comet, Rabbi Yehoshua realized that Judaism could no longer be based on signs and wonders, not only in political questions about whether to wage war against the Romans, but even in matters of halakha? There were no longer any prophets, no more daily miracles in the Temple, and from now on God would only convey His will through the intellect of the Sages.

While Rabbi Eliezer also held that one cannot look for heavenly signs in political questions perhaps his view was that halakha is the ultimate service of God, and therefore one can (and must) rely on miraculous signs to understand His will.

The Sages of the Talmud ultimately rejected Rabbi Eliezer’s opinion, and even went so far as to excommunicate him when he refused to accept the majority ruling. From that point forth, halakha was only decided by reasoned arguments, not by miracles, signs or wonders.

It would be lovely to have someone or something to tell us what we should do, whether politically or in matters of halakha. But the Torah tells us we cannot rely on omens, “For it is not in Heaven.”

With thanks to The Constant podcast for the inspiration and permission to use the word “periodicity.”