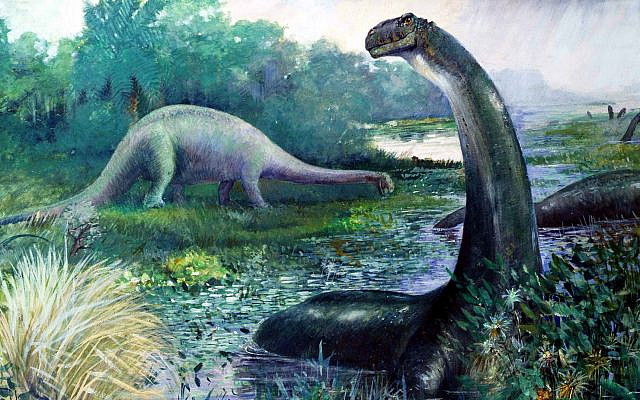 When I was a kid, one of my favorite Monty Python sketches was the interview with the paleontologist, Miss Anne Elk. John Cleese, who plays Elk, spends a lot of time in circumlocution before finally telling her interviewer, Graham Chapman, her theory:

My theory by A. Elk. Brackets Miss, brackets. This theory goes as follows and begins now. All brontosauruses are thin at one end, much, much thicker in the middle and then thin again at the far end. That is my theory, it is mine, and belongs to me and I own it, and what it is too.

The joke of the skit is that it takes her a very long time to state her theory which is really not very profound.

It was first broadcast on November 16, 1972, in the episode entitled “The All-England Summarize Proust Competition.”

Although Elk’s theory was trivial, the 1970s was an important time for brontosaurus, for although fossil evidence showed the species had been extinct for about 145 million years, and it was one of the best-known dinosaurs, paleontologists were arguing about whether or not it actually existed. And the argument was not resolved until 2015 (and yes, they did).

To understand this we have to go back to the first discovery and naming of a brontosaurus fossil by Othniel Charles Marsh back in 1879.

Marsh was born to a poor family in Lockport, NY, on October 29, 1831. His father, Caleb, was a farmer. His mother, Mary, died of cholera when he was two years old. Othniel Charles would probably have grown up to be a farmer, had it not been for his mother’s brother, the wealthy philanthropist George Peabody, Marsh would have also probably grown up to be a farmer.

As it was, with the backing of his uncle, Marsh was able to earn a degree from Yale. He then became a curator of the newly opened Peabody Museum of Natural History at Yale (no need to guess who funded the museum or suggested him for the position). 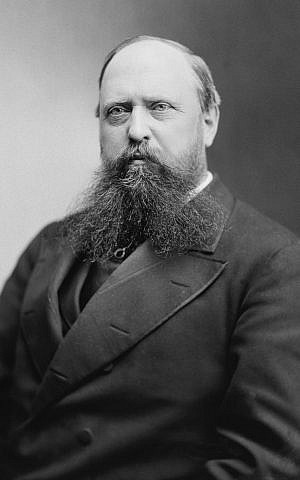 Thereafter, March dedicated himself to discovering fossils. He used his position, and an inheritance from his uncle, to discover and name hundreds of species of dinosaur.

But Marsh was not the only famous fossil hunter of the age. Edward Drinker Cope came from a wealthy family. Though he had little formal scientific training, he spent almost all his time, and all his money, hunting fossils. He discovered, described and named over 1,000 vertebrates including hundreds of dinosaurs.

Marsh and Cope initially had an amicable relationship and even named species after each other. In 1867, Cope named an amphibian fossil Ptyonius marshii. The following year March named “a new and gigantic serpent from the Tertiary of New Jersey” Mosasaurus copeanus.

However, things between them quickly deteriorated. Their rivalry, which became known as The Bone Wars, led to the bankruptcy of both men and tarnished the reputation of paleontology for decades.

They mocked each other in academic journals. They dynamited their dig sites when they had finished to prevent the other later discovering any fossils there. We have no idea how many fossil specimens were destroyed due to the actions of the two. They hired quaintly titled “dinosaur rustlers” to steal fossils from one another. They bribed paleontologists working for their rival to bring them discoveries from the digs. Knowing that Marsh and Cope would pay huge sums for new discoveries, many people who found fossils broke them into pieces to make more money, thereby destroying invaluable skeletons.

In 1890, Marsh, who was Vertebrate Paleontologist of the U.S. Geological Survey, attempted to claim all of Cope’s fossils, stating that they had been collected with federal money, and therefore belonged to the government. Cope had kept meticulous records, and proved that he had financed all his expeditions himself. 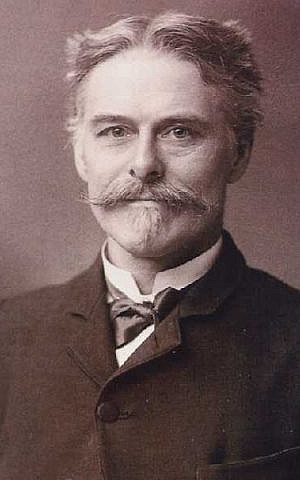 As revenge, Cope released details of all Marsh’s underhand dealings and scientific impropriety to the New York Herald. The headline read, “Scientists wage bitter warfare.” After a two-week public battle, where Marsh and the US Geological Survey were accused of corruption, incompetence and misuse of government funds, Congress launched an investigation, and eventually slashed funding for the survey, and Marsh lost his job. Then the Smithsonian demanded that Marsh hand over most of his fossils, which had been collected with government funds.

Cope died in 1897, by which time both men were financially ruined. Just before his death, Cope issued a final insult to Marsh. Brain size was then considered to be a mark of intelligence, so in his will, Cope asked for his brain to be removed and weighed and challenged Marsh to do the same. Cope’s skull is reportedly still preserved at the University of Pennsylvania, but Marsh never accepted the challenge.’ 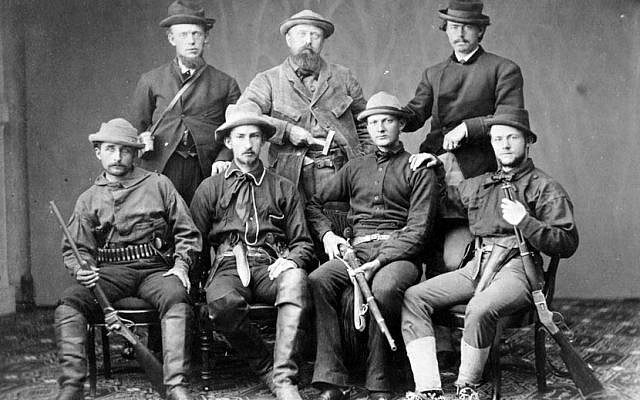 Marsh (back row and center), surrounded by armed assistants for his 1872 expedition. (Public Domain/ Wikimedia Commons)

Their contribution to paleontology was immense. Previously, there were only nine named dinosaur species in North America. Between them, Cope and Marsh discovered and named over 100 new dinosaur species, including Triceratops, Allosaurus, Diplodocus, Stegosaurus, Camarasaurus and Coelophysis. Darwin himself wrote that Marsh’s fossil collection provided, “the best support of the theory of evolution.”

However, many of the species they named were later found to be identical to other species that had already been named. The two men thought they had discovered over four times as many species as were eventually accepted by the scientific community.

For example, in 1868, in his rush to publish his findings, Cope mistakenly put the skull at the end of the tail, thinking it was a new species of plesiosaur. Marsh was quick to pounce, mocking his rival for the error.

But in 1879, Marsh made a similar error. In his hurry to name more species than his rival, he identified a species which was similar to Apatosaurus (which had been discovered by Cope) and named it Brontosaurus, meaning thunder lizard.

Every dinosaur book I ever read as a kid had pictures of brontosaurus munching plants in a pool alongside a Diplodocus or two. 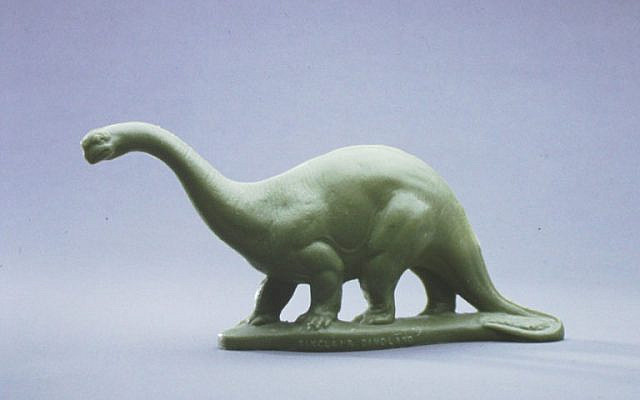 Yet Marsh’s error had already been noted by Elmer Riggs as early as 1903. He argued that Brontosaurus was not different enough from Apatosaurus to deserve its own genus. Convention is that when one species has two names (which happened quite a lot in paleontology), whichever name was given first is the one that should be used. Therefore, technically, Brontosaurus has not existed since 1903.

In the 1970s, scientists reexamined the evidence, and ruled definitively that there was no dinosaur named Brontosaurus. I guess nobody told the publishers of children’s dinosaur books.

In 1991, Stephen Jay Gould titled his fifth volume of collected essays, “Bully for Brontosaurus,” and the chapter of the same name discussed the theory and history of taxonomy, focused around the correct name for the species.

Surprisingly, in 2015, a team of scientists used a statistical method to argue that Brontosaurus was distinct enough from Apatosaurus to warrant its own name. But the matter has still not been settled. Palaeontologist Donald Prothero stated that:

Until someone has convincingly addressed the issue, I’m going to put ‘Brontosaurus’ in quotes and not follow the latest media fad, nor will I overrule Riggs (1903) and put the name in my books as a valid genus.

So, the name given by Marsh to a fossil defined Brontosaurus into existence. And Riggs’s analysis defined it away again.

Now to make an even greater leap than usual to the Torah section of my blog.

Parshat Tazria deals largely with the laws of tzara’at, commonly mistranslated as leprosy, and Metzorah describes the purification process. Both portions are read this week.

Leviticus 13 describes how a person who finds a certain type of discoloration on his skin, hair, clothing or house, must show it to a priest (cohen). If the priest declares it is impure, the person must undergo a purification process than may include temporarily leaving the city, burning the clothing or destroying the house.

One of the many strange things about tzara’at is that regardless of the symptoms, there is no impurity until the priest declares that it is impure. If a hypothetical person with skin discoloration would search the internet and discover that his symptoms match the biblical disease, or go to his doctor for confirmation, he or she would still not be impure unless a priest declares it as tzara’at.

Similarly, after the quarantine period, it was again a priest who had to declare whether a person’s symptoms had disappeared or not.

It is not that the priests were somehow greater experts on the symptoms than others. It could be that the priest would need a tzara’at specialist to check the signs and instruct him whether to declare the person pure or impure.

In fact, there were times when a person definitely had all the symptoms, but the priest was banned from examining him, so that he should not become impure.

During Passover, Shavuot and Sukkot no tzara’at inspections were carried out, so as not to ruin the joy of the festival. A bride and groom would not show their symptoms to the priest until after they had been married for a week. Even on the days when priests could check symptoms, they could only do so for two hours each day. And before examining a house for signs of tzara’at, the priest would first instruct the residents to leave and remove all their possessions, so that they neither they nor their belongings should become impure.

To be clear, there is no indication that tzara’at was contagious. There was no physical harm caused to anyone by delaying the purification process.

Although normally it is actions that speak louder than words, in the case of naming dinosaurs or declaring tzara’at, it is the words that have all the power.