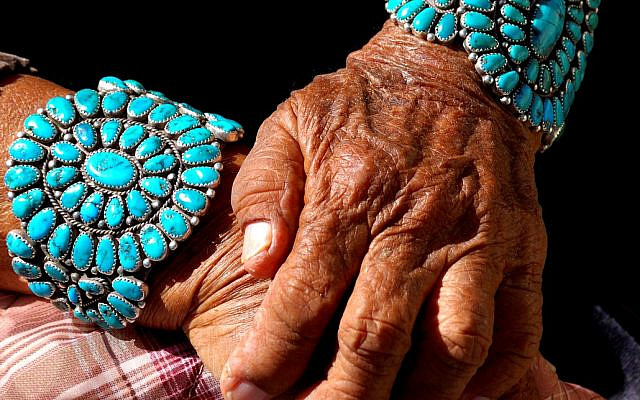 As you walk though Canyon de Chelly, in northeastern Arizona, you are struck by the stark contrast between the light brown of the sandstone and the verdant green of the fields and orchards. But most of all you are awed by the massive peaks rising straight up — hundreds of meters of sheer rockface towering over you.

And then, as you look more closely, you notice the ruins of the homes built into the sides and tops of these seemingly unscalable cliffs. The shallow river running through the valley is hardly more than a muddy puddle, which you can walk through – while being careful not to sink into the quicksand caused by the underground stream flowing beneath your feet.

The entire area is now a national park, but was once the home of the Navajo, who roamed the land, growing crops in the valley, and using the mountain caves as safe hideaways, and burying their dead in the rock crevasses.

But it was not the Navajo who built the abandoned homes and ruined villages in these cliffs. It was a nation that the Navajo derogatorily called Anasazi, or “Enemy Ancestors,” but whose descendants today prefer they be known as Ancestral Puebloans.

For about two centuries, the Ancestral Puebloans had a thriving economy, and left an indelible mark on the landscape with the incredible structures they built. Their villages were home to hundreds, or sometimes thousands, of people. And often, they were built extremely high up, in easily defensible places. For example, the mountaintop Acoma Pueblo (Sky City) is built atop a 111 meter (65 foot) sheer rock mesa. Sky City is one of the oldest, continuously inhabited communities in the USA. 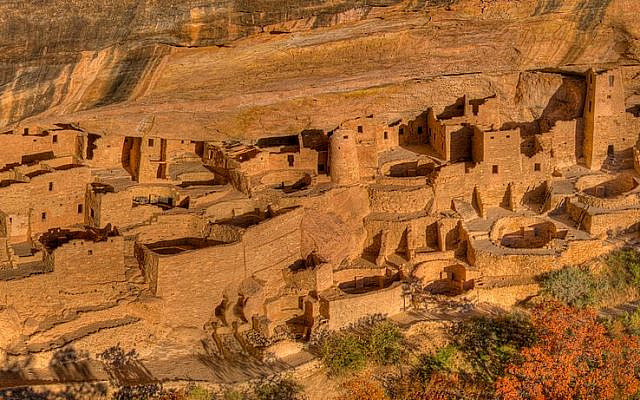 The Great Houses built by the Ancestral Puebloans contained as many as 700 rooms with high ceilings, and archeologists have found musical instruments, jewelry, ceramics, and ceremonial items within them, indicating not only that they were used for religious rites, but also showing the great wealth the people had.

And their economy was built predominantly on one skill – their ability to craft and shape turquoise. At the time, turquoise, a hydrated phosphate of copper and aluminum, was the equivalent of modern-day diamonds. 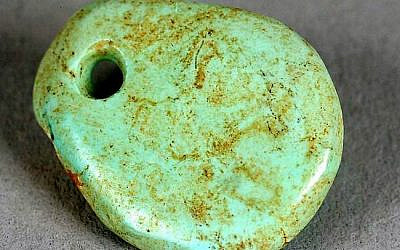 Although they had turquoise mines nearby, their trade routes stretched vast distances. Scientists analyzing the turquoise found in the Ancestral Puebloan homes came from as far away as today’s Colorado, Nevada, Southeastern California and central America. 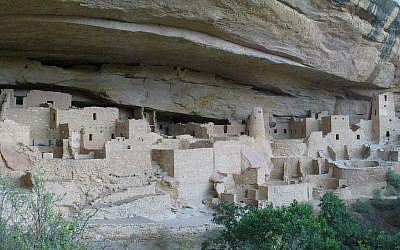 Through their trading networks, the Ancestral Puebloans of 1,000 years ago acquired luxury items such as macaw feathers and parrots, and constructions necessities including timber.

Evidence of their wealth, and the importance of turquoise can be seen in this description of two bodies found within the catacombs of a great house:

Two richly dressed skeletons were discovered lying on a bed of fifty-six thousand pieces of turquoise, surrounded by fine ceramic vessels, and covered by a sheet of ivory-colored shells imported from the ocean six hundred miles away. 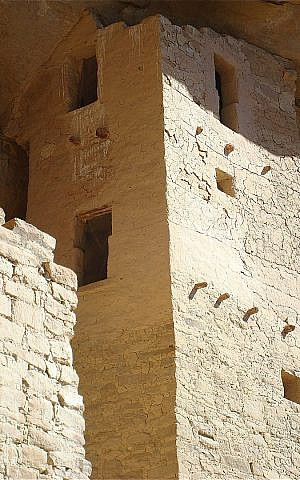 The “Golden Age” for the Puebloans extended from about 900 to 1150 – during which time their agricultural lifestyle was supported by adequate rainfall and warmer temperatures.

Nobody knows why the economy of the Ancestral Puebloans collapsed and they abandoned their homes. It is possible that the communities grew too big, and three years of drought within a decade led to starvation. There is evidence of cannibalism in some of the Puebloan homes.

Or perhaps the Navajo, who arrived from the north and took over areas formerly inhabited by the Puebloans, devastated them – either through warfare or by introducing diseases to which the locals had no immunity.

Perhaps it was due to global or regional climate change. Or maybe some combination of those or other reasons. 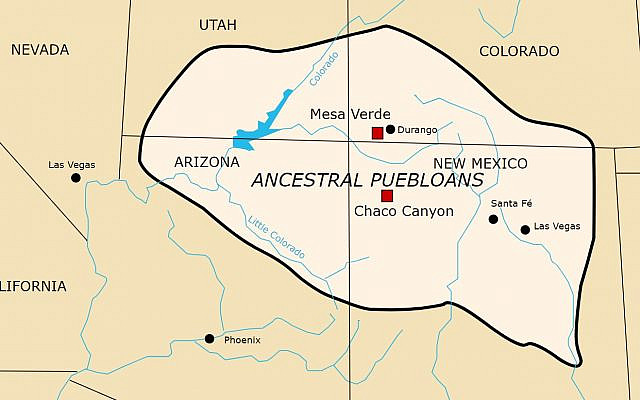 The descendants of the Ancient Puebloans include the modern Pueblo tribes, including the Hopi, Zuni, Acoma, and Laguna, who have myths and legends about turquoise and who use the blue-green stone extensively in their rituals and ceremonies, because of its magical, mystical and religious significance.

This week’s Torah reading, Tetzaveh, contains the instruction for making the breastplate worn by the High Priest when performing his tasks in the Temple. The breastplate contains four rows, each containing three precious stones. 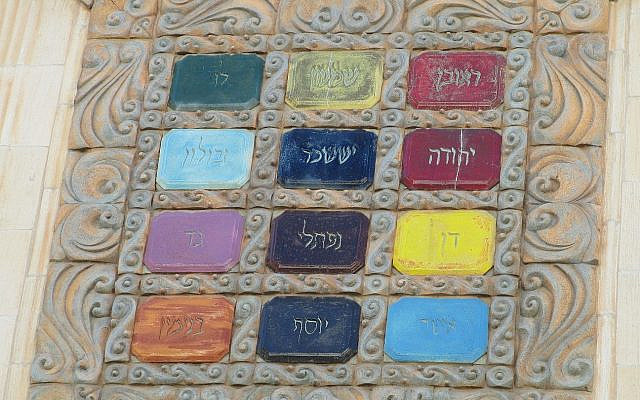 The Hebrew names of the gems in the second row are nofech, sapir and yahalom.

We don’t know for sure what these stones actually are. Onkelos and the translation attributed to Yonatan ben Uzziel translate nofech as “emerald.” According to the Septuagint, it is anthrax, meaning coal. This would imply it was black, and Ibn Janach and Radak explain that it was a black gem. But the Vulgate explains that it was carbuncle, the red color of burning coal (the word derives from the Latin word for coal — carbo). This is how Targum Yerushalmi, Chizkuni and Philo of Alexandria explain it.

However, Bamidbar Rabba (2:7) says that the three stones in this row were “sky-blue, black and white.” Since the second stone, sapir is similar to the English word sapphire, and usually translated as such, it is possible that the words in the midrash were transposed due to scribal error, and it should be “black, sky-blue and white.”

But Rav Sa’adia Gaon says it is a blue stone. The word nofech is not related to any other Hebrew word, and maybe derived from the Hebrew word m-f-k-t which means turquoise.

Turquoise was used by the Egyptians since at least the First Dynasty (3000 BCE). It was used to decorate royal jewelry, mummies and temples. So it was a stone the Israelites would have known and recognized as valuable, and with religious significance.

The Talmud (Yoma 75a), based on Exodus 35:27, tells us that the stones for the breastplate were brought by the clouds and fell down with the manna.

However, unlike most of the other stones in the breastplate, turquoise was mined in the Sinai Desert, and continues to be mined there to this day. So the Israelites could have found it without the need for miracles. 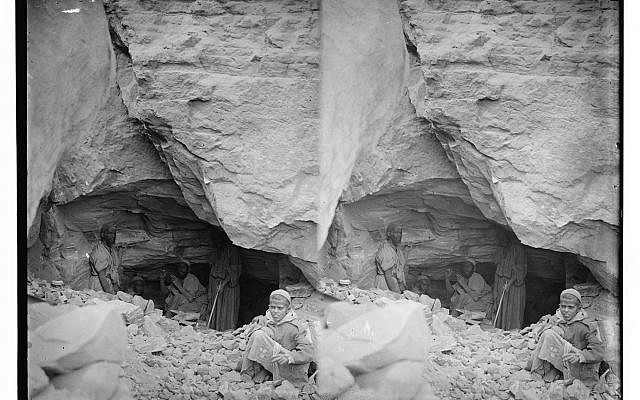 His majesty of this God has sent the God’s treasurer, the assistant and leader of the troupe, Her-Wer-Re, to the mining lands and he said: there is abundant turquoise in the hill.

Around the time the Israelites left Egypt, the country was actually known as “Ta Mefkat” or “Khetyou Mefkat,” meaning “Turquoise Terraces.” This is reflected in the modern Arabic description of Sinai as “Ard Al-Fayrouz” (“Land of Turquoise”).

So, turquoise was a big deal in ancient Egypt, the only country the fleeing Israelites had known. And it was available locally. It is not inconceivable that one of the stones on the breastplate was the blue-green gem.

Turquoise fed the economy of the sky cities of the Ancestral Puebloans. But for the Israelites in the desert, that may have been the one gem for the breastplate that they didn’t need to get from the sky.