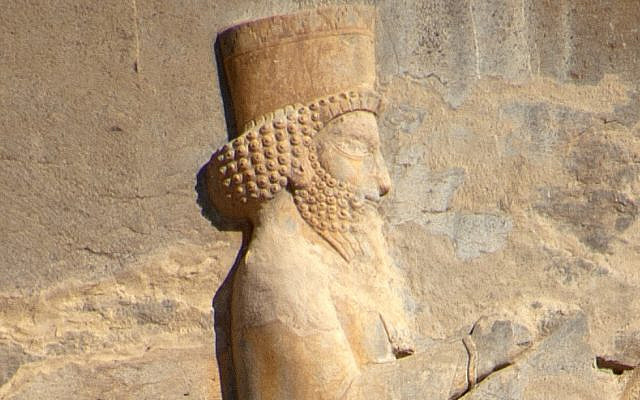 In 404 BCE, after 19 years on the throne, Darius II, King of Kings, ruler of the Persian Empire, passed away. We know very little about his reign but it seems his wife was very influential on him.

Darius ruled the Achaemenid Empire that had been founded by Cyrus the Great over 120 years earlier, and which was the largest up to that point in history. The Jewish Bible was still being written during Darius’s reign – this was still the beginning of the Second Temple era in Jerusalem. In fact, the Elephantine papyri contain a letter written to Johanan the High Priest (who is mentioned in the book of Nehemiah 12:23), dated “the 20th of Marshewan, year 17 of King Darius.”

We have also sent a letter before now, when this evil was done to us, to our lord and to the high priest Johanan and his colleagues the priests in Jerusalem and to Ostanes the brother of Anani and the nobles of the Jews, Never a letter have they sent to us.”

Before his death Darius summoned his two eldest sons, Arsames and Cyrus, to his bedside. (He had another two younger sons, Ostanes, and Oxathres, a daughter Amestris, and another nine sons who did not survive into adulthood). 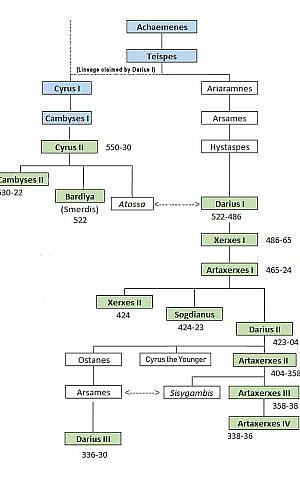 Darius’s wife Parysatis (who was also his half-sister), urged him to recognize Cyrus as his heir. It was Parysatis who had gained the throne for Darius, even though both he and she were illegitimate children of Artaxerxes I.

She argued in favor of Cyrus, explaining that although Arsames was the elder, he had been born before Darius ascended the throne, while still an ordinary citizen, so Cyrus was actually the first-born of the king.

And Cyrus in many ways was more fit for the throne.

In this courtly training Cyrus earned a double reputation; first he was held to be a paragon of modesty among his fellows, rendering an obedience to his elders which exceeded that of many of his own inferiors; and next he bore away the palm for skill in horsemanship and for love of the animal itself. Nor less in matters of war, in the use of the bow and the javelin, was he held by men in general to be at once the aptest of learners and the most eager practiser…

Frequently when he had tasted some specially excellent wine, he would send the half remaining flagon to some friend with a message to say: ‘Cyrus says, this is the best wine he has tasted for a long time, that is his excuse for sending it to you. He hopes you will drink it up to-day with a choice party of friends.’

So Cyrus was a leader. Modest yet respectful, a military expert but also with great social skills.

Yet, despite Parysatis’s pleas, Darius chose Arsames as his heir. Upon gaining the title “King of kings,” Arsames renamed himself Artaxerxes II, a name which means, “Whose rule is through truth.” He also received the Greek title Menomn because of his incredible memory.

We don’t know why Darius made the choice he did, but it may have been because Artaxerxes was the quiet, gentle son, while Cyrus was unruly and uncontrollable.

Xenophon describes Cyrus as having, “fondness for the chase, not without a certain appetite for perilous adventure in facing the wild beasts themselves.”

Cyrus, from his earliest youth, showed something of a headstrong and vehement character; Artaxerxes, on the other side, was gentler in everything, and of a nature more yielding and soft in its action. He married a beautiful and virtuous wife, at the desire of his parents…. However, Cyrus was his mother’s favorite, and the son whom she most desired to settle in the throne.

Before Artaxerxes II could even be crowned, his brother Cyrus prepared to wrest the crown from him. Cyrus was officially the governor of Asia Minor, but his claims to be on a military expedition were really a cover for the him to plan a revolt. He sought and received military support from Sparta to take the throne that he believed was rightfully his. Spartan soldiers joined the large army, including Greek mercenaries, already under Cyrus’s command and he marched against Artaxerxes who was in the capital Pasargadae.

Artaxerxes tried unsuccessfully to negotiate a peaceful settlement with his brother. So, he was forced to confront him with his army of some 40,000 men.

On September 3, 401 BCE, the armies of Artaxerxes and Cyrus the Younger met in the Battle of Cunaxa. One of the Greek soldiers fighting alongside Cyrus was Xenophon, who recorded the details of the clash in his book Anabasis (translated into English as “The March of the Ten Thousand”). 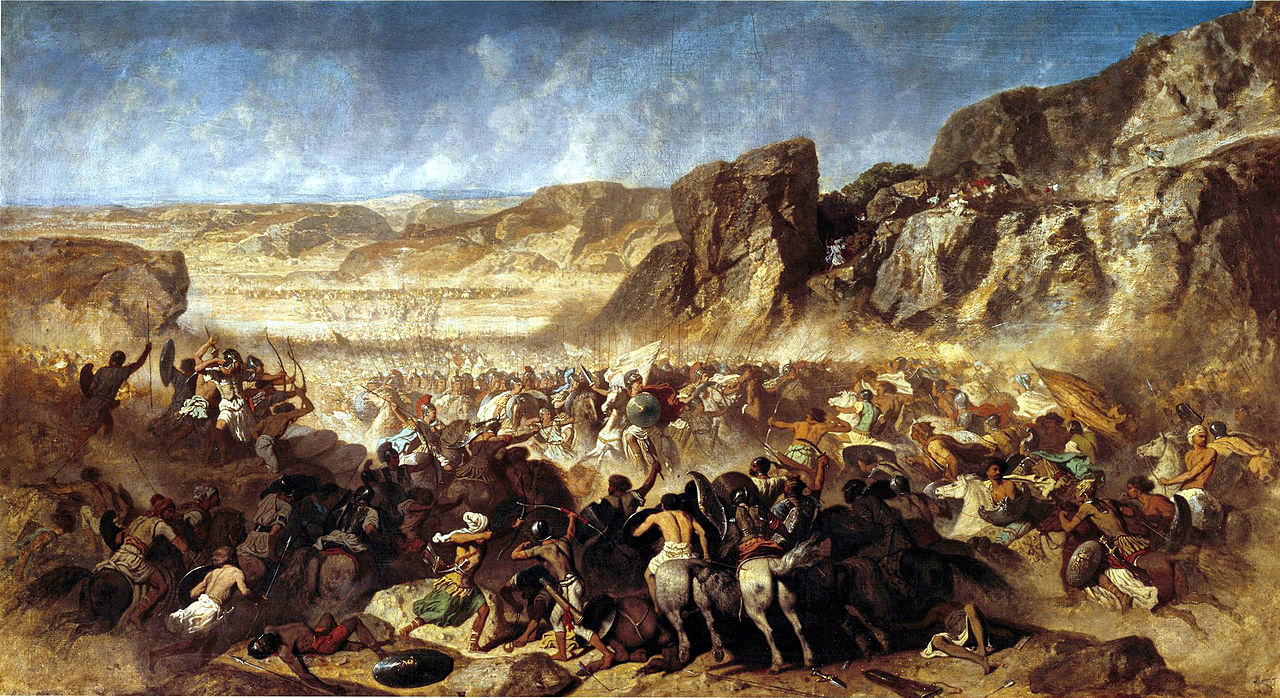 Retreat of the Ten Thousand, at the Battle of Cunaxa by Jean Adrien Guignet. (Public Domain/ Wikimedia Commons)

Despite Cyrus’s military and leadership skills, he was killed during the battle, ending his claim to the throne and causing the Greek and Spartan soldiers who had joined him to scatter. The Greek generals were killed, and Xenophon led the Ten Thousand north through deserts and mountains until they eventually reached the safety of the Black Sea and the nearby Greek cities.

The Greeks and Spartans feared Artaxerxes would seek revenge on them and their states, but it seems that he had no intent of doing so. It is claimed that the king preferred devoting himself to spirituality than to war.

Artaxerxes ruled for 46 years until his death in 358 BCE. During that time, he put down rebellions, defeated enemies, but also reached a peace treaty with Sparta and attempted, unsuccessfully, to mediate between the warring Greek cities of Sparta and Thebes.

He was buried alongside the other Achaemenid kings in Persepolis. 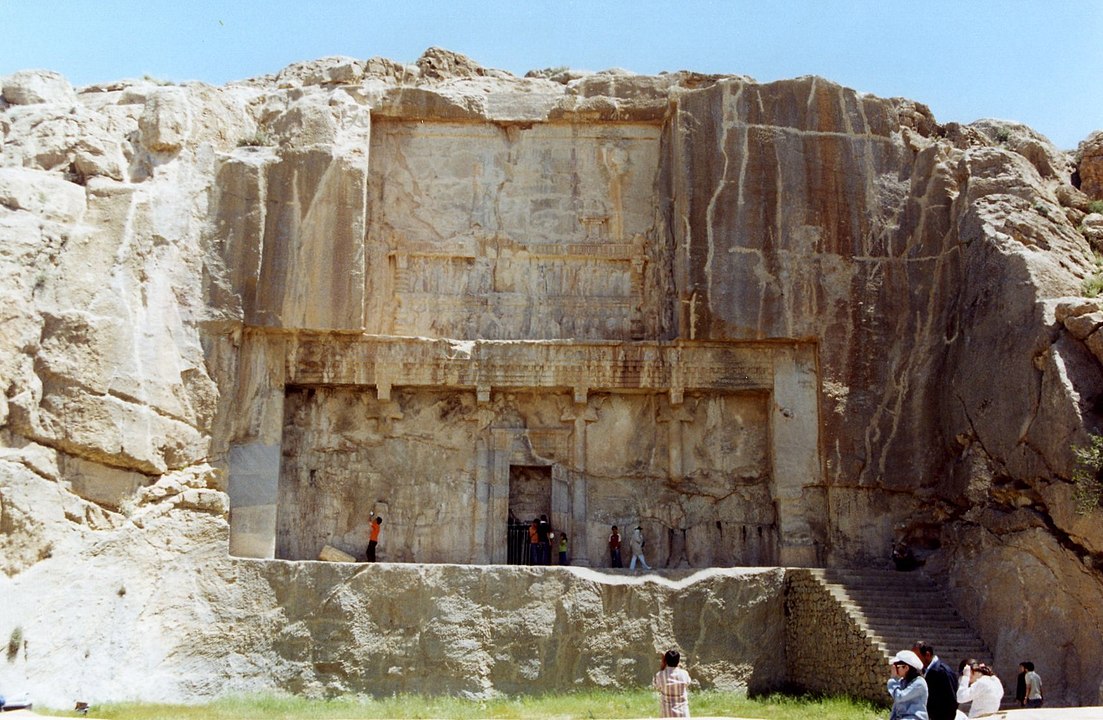 There are many parallels between the rivalry of Artaxerxes and Cyrus and that of the brothers described in this week’s Torah reading of Toledot.

Even while they were in their mother’s womb, the brothers were struggling with each other. Esau was born first, but then Jacob emerged grasping his elder brother’s heel. The Torah says that Esau was a hunter while Jacob sat in his tent. The rabbis add that Esau loved pursuing not only animals but also women, and that he was skilled in the arts of war. Jacob, in contrast, is portrayed as scholarly and quiet, learning Torah and avoiding the outside world.

And just like Darius and Parysatis, Isaac and Rebecca disagreed about which son would make a better heir. Their disagreement was perhaps about favoritism, but more importantly, they were planning the future of the Israelite nation.

Isaac saw Esau as a leader, who could command soldiers, engage with the nations around him and defeat them if necessary, a man who had the charisma and skill to transform a small family into a great nation. He saw Jacob as scholarly and religious, but not engaged in the realities of the world.

Rebecca thought that Esau was a fraud, a loose cannon who would rebel against his parents’ values and faith. She felt he was only paying lip service to his father, and could not be trusted with the leadership of her descendants. While Jacob had yet to show the full range of his abilities, Rebecca saw that he had the potential not only to lead a large tribe, but could also be trusted to carry on the faith of Abraham and Isaac.

When Isaac, who is blind in his old age, wants to bless Esau, Rebecca arranges for Jacob to impersonate his elder brother and claim the birthright as his own. Isaac is confused by this subterfuge, suspected but not knowing that this may be his younger son.

It is only after Jacob leaves and Esau enters that Isaac knows he has been duped. Yet he also understands then that Jacob indeed has the skills and cunning to get his way. And he trembles as he figures out that he has misjudged his younger son and nearly destroyed the future path of Judaism.

Isaac trembled with extremely great fear, and he said, ‘Who, then, was the hunter he caught and brought me food, which I ate before you came? I blessed him. Indeed may he be blessed.’

Jacob is one of the few Biblical personalities who develops as a character. He seems more three-dimensional than most of the others. He begins as a scholar secluded in a tent. When next week’s Torah reading begins he is stronger than a group of shepherds, and willing to take on Laban who was famous for his lies. For years he tends Laban’s sheep, becoming wealthy in the process. In the following week’s reading he is ready to confront his brother Esau in battle. But shortly thereafter he returns to sitting quietly, the old man of the family, who eventually moves to Egypt and brings blessings to Pharaoh and his people.

Leadership is complex, and choosing a leader is difficult. It requires foresight and intellect to select a leader who will shape the nation in a positive way. Just as people and nations are complex, so too leadership cannot be decided simply on a couple of basic issues.

On paper, both Cyrus and Esau may have appeared the better leader – charismatic, strong and cunning. But history has taught us that Artaxerxes brought security and safety to Persia while Jacob became a patriarch of the Jewish nation. Both Darius and Rebecca had the foresight to promote the son who brought prosperity and tranquility to their nations.