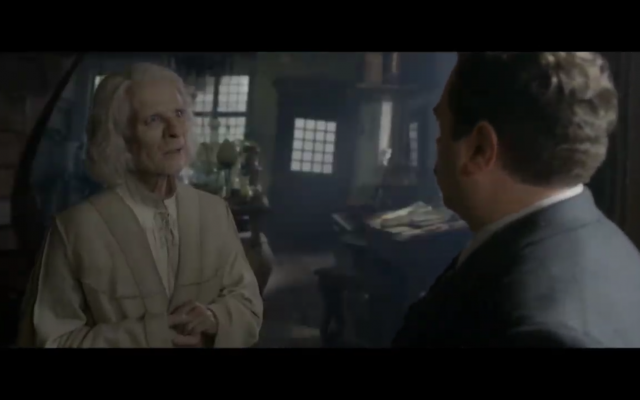 According to J.K. Rowling’s first book, Flamel had discovered how to create a philosopher’s stone which gave him eternal life. He and his wife Perenelle eventually set their affairs in order and died after Dumbledore told them of the danger posed by the stone’s existence sometime in the early 1990s.

We actually know quite a lot about the real Flamel. He lived in France in the 14th and 15th centuries, was a scribe and seller of manuscripts (he died in 1418, a couple of decades before the printing press was invented). In 1368 he married the twice-widowed Perenelle, and she brought with her a medium-sized fortune. The couple invested the money in property and donated their wealth generously to various churches in Paris.

In 1410 Flamel designed his own gravestone (which can still be seen in the Musée de Cluny). On November 22, 1416 he wrote his will and in 1418 he died aged almost 80 years old and was buried in Paris. 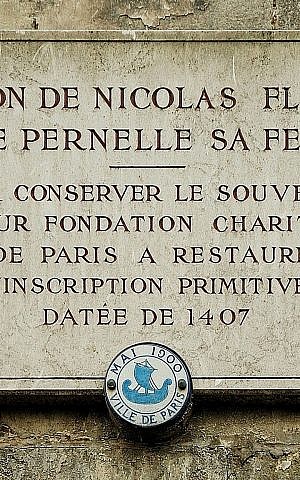 Plaque on the home of Nicolas and Pernelle Flamel in Paris. (CC BY-SA, filip/ Wikimedia Commons)[/caption]

There is no evidence that he practised alchemy, which was extremely popular in medieval times, though it is possible that in his business he came across manuscripts on the subject.

However, nearly 200 years later, in 1612 the first book on alchemy was published in that same city. “Exposition of the Hieroglyphical Figures” listed Flamel as the author. Which means that either he had actually discovered how to make the elixir of eternal life using a philosopher’s stone or the book was not really written by him at all. But either way, after his death Flamel became the most well-known alchemist in Europe.

Victor Hugo mentions Flamel in The Hunchback of Notre Dame (4:5) where he writes:

It was the house which Nicolas Flamel had built, where he had died about 1417, and which, constantly deserted since that time, had already begun to fall in ruins,—so greatly had the hermetics and the alchemists of all countries wasted away the walls, merely by carving their names upon them. Some neighbors even affirm that they had once seen, through an air–hole, Archdeacon Claude excavating, turning over, digging up the earth in the two cellars, whose supports had been daubed with numberless couplets and hieroglyphics by Nicolas Flamel himself. It was supposed that Flamel had buried the philosopher’s stone in the cellar.

Flamel’s fame spread to England, where Sir Isaac Newton (who spent quite a lot of his time trying to turn lead into gold through alchemy) in his Sententiae Luciferae et Conclusiones Notabiles wrote, “The serpents around the caduceus, the Dragons Flamelli.”

In the introduction to Exposition of the Hieroglyphical Figures, the author describes that he came into possession of a book.

Whilst, therefore, I Nicholas Flamel, Notary, after the decease of my Parents… there fell into my hands for the sum of two florins, a guilded Book, very old and large. It was not of Paper, nor of Parchment, as other Books be, but was only made of delicate rinds (as it seemed unto me) of tender young trees. The cover of it was of brass, well bound, all engraven with letters or strange figures.

He didn’t know the provenance of the book but it stated it was written by, “Abraham the Jew, ‘Prince, Priest, Levite, Astrologer, and Philosopher, to the Nation of the Jews, by the Wrath of God dispersed among the Gauls, sendeth Health.” 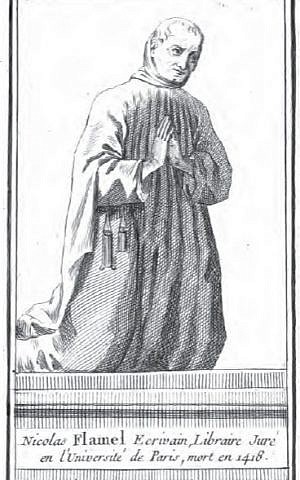 Flamel as represented in 1402 on the portal of Sainte-Geneviève des Ardens, from Étienne François Villain, 1761. (Public Domain/ Wikimedia Commons)

By rights, Flamel should not have read the book, because it was “filled with great execrations and curses… against every person that should cast his eyes upon it if he were not Sacrificer or Scribe.” However, he told himself that even though he was not a sacrificer or priest, he sold manuscripts and occasionally wrote books, and therefore qualified as a scribe.

According to legend, Flamel and his wife spent almost their entire lives trying to make sense of the book. Flamel journeyed to Spain to seek help understanding the book. He met a Jew who told him that he had come into possession of the Book of Abramelin the Mage.

According to Samuel Liddell MacGregor Mathers, who first translated the book into English, the Book of Abramelin was written by a Rabbi named Abraham of Worms who learned its secrets from an Egyptian magician also named Abraham. Others claimed that the book actually dated back to the patriarch Abraham. George Dehn, who translated the book into English claimed it was written by Yaakov ben Moshe Levi Moelin, whose book Minhagim is the source for many of the halakhot in Rabbi Moshe Isserlis’s (Rema) glosses in the Shulhan Arukh.

I’m not sure how many readers of Harry Potter know who either the real or the legendary Flamel was, nor the strong Jewish connection behind his mythic alchemy.

But I’m more interested (at least in connection to this week’s Torah reading, Tzav, which contains instructions for cohanim) in the phrase “Sacrificer or scribe.” “Sacrificer” is clearly a term for cohanim, the priests who offered all the sacrifices in the mishkan and later the Temple, but what is the connection between the priests and scribes?

The most famous sacrificer who was also a scribe was the Biblical Ezra (known as Ezra the Scribe) who returned to Israel and helped build the Second Temple. Chapter 7 of the Book of Ezra lists Ezra’s antecedents, tracing him back to Aharon the priest and also states “He was a quick scribe in the Torah of Moses,” (Ezra 7:6).

He is known as Ezra the scribe because he taught the Torah to the exiles who returned from Babylon. According to one opinion in the Talmud (Sanhedrin 21b) Ezra introduced the Ashurit Hebrew letters that are used today in all the Torah scrolls. He convened the court known as the Men of the Great Assembly which codified the Bible and created many of the rabbinic laws.

Ezra was the teacher par excellence. Reish Lakish said that when the Torah was forgotten it was Ezra who re-established it (Sukkah 20a). Rabbi Yossi said that has Moses not preceded him, Ezra would have been worthy of giving the Torah to Israel (Sanhedrin 21b).

Ezra was the embodiment of the verse in Malachi (2:7), “For the lips of the priest will protect knowledge, and you should seek Torah from his mouth.”

Although Ezra was the paradigm, Rambam says that this was the intended role of priests. He writes that the tribe of Levi were differentiated from the rest of the Israelite nation specifically in order to serve God and teach Torah. He explains that this is the reason that Levi was the only tribe that did not receive a portion of land. While the other tribes had to engage in agriculture and commerce, the tribe of Levi was freed from such time-consuming activities (Hilkhot Shemitta ve’Yovel 13:12).

Why was Levi not given an inheritance in the land of Israel?… Because he was separated to worship God and serve Him, and to teach His just ways and righteous laws to the people… For this reason [the tribe of Levi] was separated from the ways of the world.

Rambam goes a step further, and says that anyone in the world, whether Jewish or not, who dedicates themselves to serving God becomes as holy as the tribe of Levi (Hilkhot Shemitta ve’Yovel 13:13).

It is not only the tribe of Levi, but any person from anyone in the world, whose spirit motivates him and he understands from his intellect to separate himself and stand to serve God and worship him, to know God and to walk justly as the Lord made him, and shrugs from his neck the yoke of public concerns that people seek, he becomes sanctified — the holy of holies — and God will be his portion forever and ever.

The legendary Nicolas Flamel claimed he was a scribe and dedicated his entire life to understanding the secrets of alchemy and eternal life. But the priests of this week’s Torah portion, and those Jews and non-Jews who wish to follow in their footsteps, choose to dedicate their entire lives to pursuing the knowledge of God and serving God through teaching others. In this way, they earn riches far greater than the alchemists dreamed of and the ultimate eternal life in the world to come.